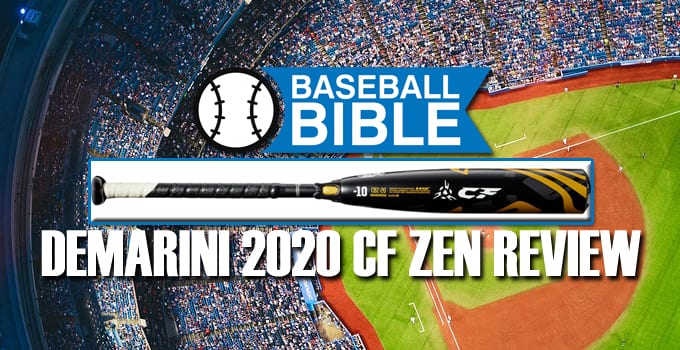 I’ve reviewed many bats over the years. You can name all the big manufacturers like Miken, Easton, and Louisville Slugger, and I’d be able to give you details on their bats—new and old. That being said, sometimes it can pay off to stray from the path a bit and look at products that aren’t produced by those big names. That’s exactly what I did when I took a look at the DeMarini 2020 CF Zen.

Don’t get me wrong, DeMarini has made some stunning progress over the past seven years. It just doesn’t have as long of a history as some of the other brands that I’ve reviewed. That being said, despite its relatively young age, I was astonished by the quality I saw on this bat. Without further adieu, let’s get right into the dirty details.

Firstly, let’s take a look at DeMarini‘s promotional video for the bat:

This bat features two-piece construction. If you’re new to baseball, then you might be wondering what all the one-piece versus two-piece hoopla is all about. I’m going to break it down in a manner that’s both brief and objective so that you can get a clear idea of the pros and cons of each without wasting an hour of your time. In a nutshell, there’s no such thing as one superior construction type.

Both types have their own respective merits. What it really comes down to is the player wielding the bat. I’m not just referring to skill either, but rather, the style and physique of the ballplayer. Heavy sluggers like Babe Ruth preferred one-piece bats because they retain all the power that they generate in their swings.

In fact, many MLB ballplayers prefer to use two-piece construction, too, if they’re contact hitters that don’t have enough power behind their swings. Faster swings also mean you won’t strike out as often since you can go from idle to contact in a fraction of a second. As far as two-piece bats go, this one is pretty stellar and nails the whiplash effect just right. If you’re a contact hitter looking for a two-piece bat, then this is the one for you.

One of the things that makes this bat so special is the end cap that it features. You might think that the end cap is a trivial piece of your bat’s construction, but that couldn’t be farther from the truth. While it may seem small and insignificant, it can actually be a big determiner of performance.

This bat features one of the best end caps I’ve ever seen. The ReAction end cap brings barrel performance to a whole new level without sacrificing even the smallest amount of swing speed. If you want an end cap that will boost barrel performance tremendously but don’t want to swing a heavyweight, then the DeMarini 2020 CF Zen may very well be the bat for you.

There’s always a balance that needs to be achieved when using high-performance end caps to ensure that it swings right without being too heavy. I can say with full confidence that DeMarini nailed that balance with this bat.

You might be wondering what a 3Fusion connection even means. Did they use uranium in this bat? Rest assured, there isn’t any radiation present in this DeMarini masterpiece. It actually refers to the technology used to hold the two pieces of the bat together — the handle and the barrel. Connecting the hand and the barrel is a crucial part of any bat-designing process.

If you don’t get the connection right, then you’ll run into a wide variety of problems. Fortunately, DeMarini got it all so right with their CF Zen. The 3Fusion connection significantly reduces the amount of vibration that you’ll feel upon contact by redirecting all the energy back towards the barrel — ensuring precise and powerful swings with every hit. If you’re sick and tired of using bats that wobble like a coward, then you should get the CF Zen and watch all your problems go away.

When buying a baseball bat of this caliber, the warranty is more of a statement rather than an actual utility. The fact is, you’ll rarely see any damage on bats that are as well-crafted as this one. That being said, while you most likely won’t ever get to use the warranty, it’s always nice to see one as it shows that the manufacturer has put their trust in the integrity of their product.

If you see warranties as seals of approval like I do, then you’ll be happy to see that the DeMarini 2020 CF Zen has a full-year warranty. In the extremely rare event that the bat does shatter, at least your investment will be covered by the warranty — but I highly doubt that you’ll see that happen within your lifetime.

It’s worth noting that the warranty only applies to one replacement, but if you’re unlucky enough to break one of these, I really don’t see you breaking another one — the odds are just too slim from what I’ve seen.

Of course, if you wanted to see the specs of the bat, then you could have just logged onto the beautifully-designed DeMarini website. You came here, at least in part, because you wanted to hear about my personal experience with the DeMarini 2020 CF Zen. Well, if I had to summarize it in one word, I’d use “spectacular.” Gosh, where do I even begin? Let’s take it from the top.

As soon as I received the bat, I ripped the packaging open like a kid on Christmas morning and raced to the ballpark. I did end up getting a parking ticket, but every war has its casualties. After keeping the ticket in my glove compartment and getting out of my car, I knew that a great day of swinging awaited me. The first swing was a feeling that was too unreal to be put into words.

I continued swinging again and again, with time flying by like someone put the world on double speed. The bat just felt so light yet powerful in my hands. I hit a home run after just the first few swings, which was truly amazing. The end cap also lived up to its claims and boosted the performance.

I could really feel the difference that it provided. The pop in the bat was definitely equal, if not superior, to most of the bats that they use up in the big leagues. I lost count, but I must have put in a few hundred swings that day and a further hundred the day after. Throughout all that wear and tear, I didn’t see a single dent on the bat afterward. It still looked brand new, like I had just taken it out of the box.

If you’re tired of buying from the usual manufacturers but still want to get a high-performance bat that blends speed and power, then this bat is the right choice for you.