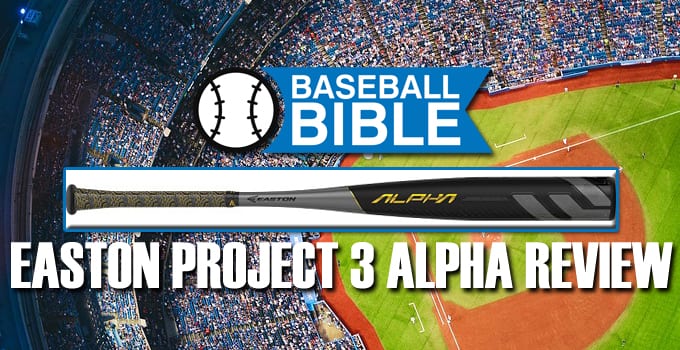 I bought this bat as soon as it was released back in 2018. In fact, I was keeping up with the news long before it came out to ensure I got it right. All the publicity about its next-level design had me intrigued during the wait, but I couldn’t help but wonder if it would live up to all the hype. Of course, it’s Easton, so I had high hopes for the Easton Project 3 Alpha.

In this article, I’m going to go through the entire characteristics of this bat, including its pros and potential cons. So without further delay, let’s get stuck in!

The video below shows the bat in action.

Easton has been the prime supplier of aluminum bats for the past 40 years, and they show no signs of stopping. Every year they release new products that are designed using the cutting edge of modern science. They treat every build like a muscle car from a decade in the future, using only the best metals and fabricating techniques.

They’re not afraid to break the mold with their innovative designs and will be producing bats for top athletes for generations to come. When you buy an Easton bat, you know that you’re getting a performance that’s ahead of its time. If you want to stay on the cutting edge of the baseball world, go for Easton bats. Trust me, you won’t ever be disappointed with any of their products.

This bat has a one-piece construction. What does that mean? Well, that means that the bat was developed using a single piece of metal. In contrast, two-piece bats are created in two separate sections — with the barrel and handle manufactured individually. There are pros and cons to each type, but here’s why I think the one-piece construction on this bat is a major benefit.

Two-piece bats flex, which can create a whip effect. Those who have average or even below-average swing power tend to favor two-piece bats since it helps them generate power. However, the inverse becomes true when looking at power hitters.

Power hitters can generate a lot of power on their own, but the flex in two-piece bats actually ends up with you losing some power in your swings. This is why those who have power behind their swing prefer one-piece construction bats like the Easton Project 3 Alpha.

One-piece bats are stiff on every hit, and thus 100% of the power you generate goes into the ball. If you have power in your swings and want to hit home runs for your team, then go for a one-piece.

ATAC stands for advanced thermal alloy construction. This ensures that the barrel will be durable beyond belief and provide a level of power that you’ve never seen outside of Hollywood CGI. Your opponents will think that you’re editing physics whenever you land a hit with this bat.

If you want a bat that will bring power and never snap, then sticking to those with an ATAC barrel is the way to go.

Custom Lizard Skins are proprietary grips that are only available on Easton bats. They provide the optimal level of performance and comfort to ensure that you’re hitting every shot perfectly when your team needs you most.

Balanced bats have their full weight spread out evenly across their whole length. This form of construction allows ballplayers to swing a lot faster. As we all know, a faster swing means a more powerful hit. Contact hitters tend to favor balanced bats due to the fact that it helps them hit very high speeds on each swing without them having to lose any control.

If you want a quick swing and top-notch accuracy, then you’re probably looking for a balanced bat. Quicker swings also mean you’ll strike out less, and your bat can go from idle to hit in a split second.

That being said, there are certain benefits to end-loaded bats, especially if you’re a power hitter. Fortunately, Easton has prepared an end-loaded version that we’ll cover in the section below.

If you want more power, then you could buy the XL version of the bat. This variant is end-loaded, which works great for power hitters.

Sure, you’ll lose some control, but if you’re trying to maximize the amount of mass in the hitting area, then the XL version of the 3 Alpha might be the right bat for you.

You might be worried that the XL version is gonna come with an extra-large price tag. Fortunately, it only costs $30 more than the regular variant.

I can happily state that it met my expectations and exceeded them by a long shot. I’ve been using the bat pretty much daily since I got it, and it still looks brand new. If I told a detective that I had just taken it out of the original packaging yesterday, they would believe me because there are absolutely no signs of wear or tear on the bat even after heavy use.

Anyone who knows me will tell you that I don’t baby my bats. They’re tools that were made to be used, so I give each and every one of them a roughing up whenever I go to the ballpark. Every swing feels superb when I use this bat. The one-piece construction retains all the power that I generate, and so I see every hit end with a ball flying out of sight.

Some of my pals who prefer wood bats were skeptical when I told them about the performance that this provided. They reluctantly agreed to meet up for a few comparison swings. I don’t want to bore you with the details, but long story short, they all bought their own Easton Project 3 Alpha in the end.

There are some who call this model the Jehovah’s Witness of bats because it can convert fans of wooden bats into worshipers of alloy bats. I don’t like to bring religion into sports, but I must admit that I tend to agree with that analogy because it’s just so damn true.

These are guys who swore by wooden bats for years, and now they’re swinging an Easton after seeing me hit for just one day.

People often say that the warranty is trivial if the bat is good enough. And I’ll be the first to admit that there’s some truth to that. You don’t really need to worry about whether or not a bat has a warranty if you know it’s good and not going to snap on you.

That being said, while you likely won’t ever have to use a warranty, it’s always good to look for bats that have one because it displays manufacturer confidence in the product. If they trust the performance of their bats enough to offer a warranty, then it’s likely going to perform pretty well.

This Easton bat has a full year left on its warranty, showing you that its manufacturer has put its full faith behind the product. What more do you need to trust in the performance of this bat?

Beyond the fact that this bat seems to have a magical ability to convert wood lovers into fans of alloy bats, it also provides an unmatched level of durability and performance. The design and manufacturing of this bat are at least a decade ahead of their time. We’ve included this bat as one of our top picks for 2020. If you want to perform at your peak, this is the bat for you.

Where To Buy The Easton Project 3 Alpha?

The Easton Project 3 Alpha baseball bat is available to buy from Amazon.

Amazon also has the XL version of the bat available