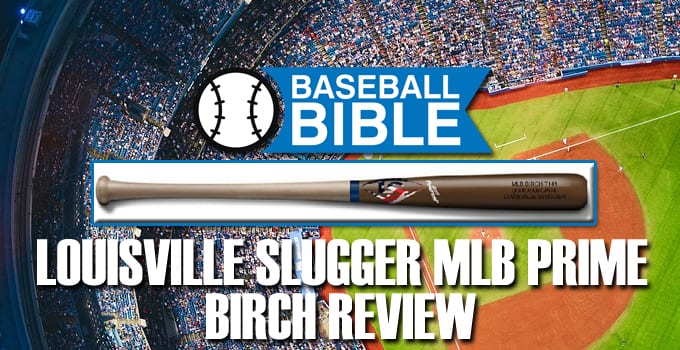 I come to you today with a true classic. As I write this review, I have on my lap the best wooden baseball bat in American history; the Louisville Slugger MLB Prime Birch.

Firstly, I highly recommend you check out this awesome video of how Louisville Slugger bats are made, as Dodgers outfielder Joc Pedersen saw when he visited LS HQ. Even if you’re not a Dodgers fan, it’s incredible viewing:

This is a review I’ve wanted to do for a long time, and after getting countless swings in with the bat, I’m confident it’s the right time. Without further ado, let’s get into the review and find out why!

I’ve gotten some funny looks upon telling people that my bat is made out of birch. After all, it isn’t the most famous wood in the world of baseball. That being said, it’s rapidly rising in popularity due to the performance it provides.

If you cross-bred a maple bat and an ash bat, you’d end up with a birch bat. Sure, it’s not one of the classic baseball woods, but the innovative nature of Louisville Slugger is what makes the company so great — and trust me, we’ll be going into greater depth about the merits of the manufacturer later on in this article.

If you’ve always wondered what it felt like to hold an MLB bat in your hands, then wonder no more, as the wood in these bats is nothing but MLB-grade. Any bat in the Prime line of Louisville Slugger is made out of MLB-grade wood to give you the professional performance and feel that all ballplayers crave. Only the top 3% of wood that comes into Louisville Slugger will be used to craft Prime bats.

Don’t get me wrong; any bat produced by Louisville Slugger will give you a high-performance experience when you use it. That being said, the bats in their Prime line, especially the Louisville Slugger MLB Prime, are top-shelf products that bring a unique sensation that no other bat can provide. It’s hard to explain just how good it feels to hold one of these in your hands and hit a good shot, but that’s just all the more reason for you to buy it.

Perhaps one of the best qualities about this bat—beyond the unparalleled durability and performance—is the fact that it’s so damn customizable. Sure, you could technically make any bat your own by adding a custom paint job or some stickers, but this specific bat takes things to a whole new level.

Upon ordering the bat, you’ll be able to customize various aspects of the bat to your liking. This makes it a great option for gifts as you’ll be able to personalize the look depending on who you’re giving it to. It will also help you express team spirit during home games. The best analogy I can think of is that this bat is pretty much a flag made out of birch, and you can put whatever you want on it.

Let’s be honest, even if this bat only came in exposed birch, I’d still buy it just due to the performance, but the fact that you can get a tailored look depending on your taste and style just blows my mind. It’s like putting a badass engine in a sports car and then being told you’ll get a free paint job to boot. Absolutely great work by the manufacturer.

Whenever I buy a bat — especially those of the premium variety — the first thing I do is look at the company manufacturing it. Sure, some might argue that brand names mean nothing and are simply a ploy to charge more for the same product. I respectfully disagree.

The company history of Louisville Slugger goes back over a century, and it’s definitely an inspiring one. It all started with your average 17-year-old kid who liked baseball a little too much. Bud Hillerich was the son of a woodworker. After watching a local game and seeing the MVP of the team break his bat, Bud offered to make a new one using the equipment at his dad’s woodworking shop.

It wasn’t his first time making a bat, as he played baseball himself. He had made quite a few bats for personal use and even gave a few away to his teammates on the amateur team. The MVP gladly guided the 17-year-old bud as he crafted the bat. On that very day, while no one knew it, the Louisville Slugger was born.

What happened to that MVP? Well, he used the bat the very next day and got some of the best hits of his career. After hearing that the bat was made by Bud and seeing its performance level, the woodworking shop quickly filled up with ballplayers who wanted a piece of the pie.

While Bud’s father was initially hesitant to shift focus away from furniture, he eventually allowed his son to fabricate bats for the ballplayers who were placing orders. Those critical series of events happened over 130 years ago, and the Louisville slugger company sold over 100 million top-notch bats at that time.

I don’t know about you, but if a company manages to stay on top of the wooden bat market for more than a century, then I’m more than willing to entrust my money to them when buying a new slugger.

The Exo-Armor finish is a proprietary technology that’s only in use by Louisville Slugger. You won’t see any other companies using this cutting-edge finish on their bats. The finish doubles the hardness of the bat, ensuring that it’ll never snap in the middle of a game. After all, the entire Louisville Slugger company was conceived because a bat broke in the middle of a home game, so you can be sure that durability is of the utmost priority.

I was a bit skeptical at first when I heard about this “new secret finish” that everyone had been talking about. I wasn’t sure if it was an actual performance enhancer or just another sales tactic to beat competitors. Let me just say that all my doubts were immediately crushed upon using this bat myself. I can feel the added hardness with every hit.

That being said, the bat feels just as flexible as my old ash wood bats despite being way harder. It truly brings the best of both worlds, and I believe wholeheartedly that the Exo-Armor finish has a lot to do with that. Honestly, if I had the time/money to spare, I’d probably quit my day job and apply to work at the Louisville Slugger factory just so I could find out what the Exo-Armor finish is actually made out of.

The Louisville Slugger MLB Prime really is the ultimate wood bat, purely because you can customize it in any way you want to fit exactly what you need. The bat features prominently on our best wood bats list, and I don’t expect that to change anytime soon; well, unless the next customizable model from LS can top it!

Where To Buy The Louisville Slugger MLB Prime

If Birchwood is not your thing, you are also able to order the customized bat with Maple or Ash wood too.