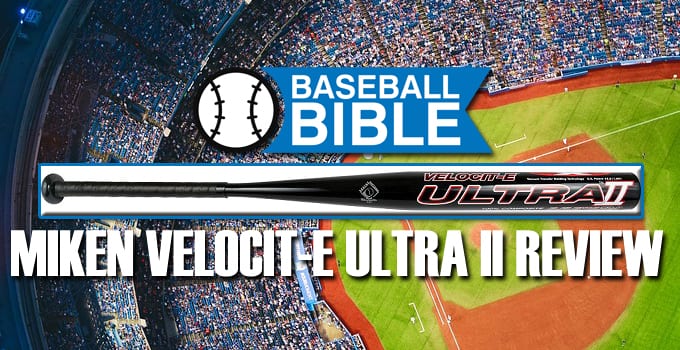 I’ve used a lot of bats in my decades of baseball, but few products have impressed me more than the one I’m going to be reviewing today.

In this article, I’m going to highlight my favorite things about the Miken Velocit-e Ultra II so that anyone considering buying this bat will know that it’s the right choice for them. Without further adieu, let’s slide right into that base.

Check out this video which shows this Miken bat in action!

Made in the USA

One of the best things about this bat is the fact that it’s produced in the US. In an age where most sporting companies are outsourcing their manufacturing to China, it’s nice to see Miken keeping the American dream planted firmly on American soil.

Baseball is arguably the most American game that one can play, so why not play it with a bat that was constructed in the US rather than an offshore product?

If you want your patriotism to shine with balanced hits, then this is definitely the bat for you.

If you intend to join a Senior Softball tournament anytime soon, then you’ll be glad to have a Miken Velocit-e Ultra II. You see, not all bats are certified for use in their tournaments, but this bat is since it’s produced by Miken, a trusted name in the baseball industry.

Using bats that aren’t certified could result in disqualification. Don’t waste your shot at glory; use a Miken bat for all your tournament needs!

You can also find a whole host of the best softball bat options on our overall category review page.

Some bats are top-heavy. While top-heavy bats do have their place in baseball, specifically for power swings, having a balanced bat can be very beneficial. Even the most seasoned of players gravitate towards balanced bats as they help with accuracy.

They can also be easier to use for beginners who aren’t ready to deal with the lopsided construction of top-heavy bats. Many female baseball players also prefer balanced bats as they’re easier to swing without much effort.

Furthermore, balanced bats tend to have faster swings despite being slightly less powerful than top-heavy bats. You’ll find that, more often than not, speed is essential as your power is useless if you aren’t quick enough to actually hit the ball.

If you’re tired of striking out with your top-heavy bats, then you should definitely consider giving this balanced bat a try.

One of the best things about the Miken Velocit-e Ultra II is that it’s entirely constructed from composite. The debate of composite versus alloy has been waged for nearly as long as baseball, but there are some clear benefits that swing the tide in the composite bat’s favor.

For one, composite bats are far lighter than alloy bats. Why does this matter? Well, it means you’ll be able to extend the barrel length of your bats without turning them into one-ton heavyweight rods that no one is strong enough to swing.

You might wonder what the purpose of extending a bat’s length even is. Well, the key benefit here is that you increase the surface area of your sweet spot, thus increasing the odds of getting a good hit, perhaps even a home run.

In contrast, alloy bats are heavier and thus shorter, making it harder for you to hit a ball with that sweet spot.

You’ll also notice less vibration with composite bats as they often feature two-part construction, with the handle being isolated from the rest of the barrel.

Many beginner bats are made of composite, making it easier for newbies to practice their hand-eye coordination without being discouraged by the constant misses that a short bat would bring.

It’s worth noting that this specific bat doesn’t have a warranty, so you might not want to rough it up too much.

That said, Miken is a well-established sports company, so you shouldn’t worry about that too much. Just be considerate when using the bat, as you won’t have a warranty to fall back on if you get a little too enthusiastic and shatter it.

That being the case, this might work better as a game bat for crucial matches rather than a training bat, as using it excessively could wear down the bat faster.

This balanced Miken bat utilizes the proprietary E-Flex technology. This ensures that it is a perfect blend of durability and performance.

The technology used to craft the Miken Velocit-e Ultra II is on the absolute cutting-edge of sports science, and you can tell that just by picking the bat up.

Needless to say, Miken is the only company with access to this technology, so don’t expect to see this level of performance and durability on cheaper bats.

This bat has a 13.5” barrel, which should be more than enough length to get some good hits in every game. While some players think there’s shame in using a longer barrel, seeing it as the easy way out, we would argue that increasing your chances of getting a good hit is actually the smart move.

You don’t see NFL players wearing oversized clown shoes to the Super Bowl as a handicap because normal footwear is “too easy.”

Competitive sports are all about training hard and giving yourself an edge over your opponent so you can come out on top, and that’s exactly what this Miken bat with its 13.5” barrel gives you an edge.

I’ve personally hit quite a few home runs since picking this bat up. The longer barrel makes it much easier to consistently get those clean hits off.

While there’s certainly prestige to using shorter bats, I’d much rather be known as the guy who gets home runs than the guy who handicaps himself and risks a team victory for the sake of fame.

So, before buying the brand-new version of this bat, I picked up a second-hand one just to see if I liked it enough to review the real thing. Its durability absolutely exceeded any expectations that I had for it.

The bat was in pretty rough shape when I got it, hence the cheap price, but it still lasted me the entire season before finally meeting its maker and going to baseball heaven.

I’ve been hitting home runs with this new bat, and it hasn’t shown any signs of wear, so I expect to use it for seasons to come. Of course, just because it’s durable doesn’t mean you should start whacking street posts with it!

Beyond the legal ramifications, you really should handle your equipment with care, even if they are as durable as this bat.

Overall, I can’t imagine using another bat for softball since I’ve picked up the Miken Velocit-e Ultra II. If you’re looking for a bat that will keep you company throughout the next few seasons, then this is definitely the one to go for. I’m pretty darn sure you’ll feel the same way once you get yours.

Where To Buy The Miken Velocit-e Ultra II?