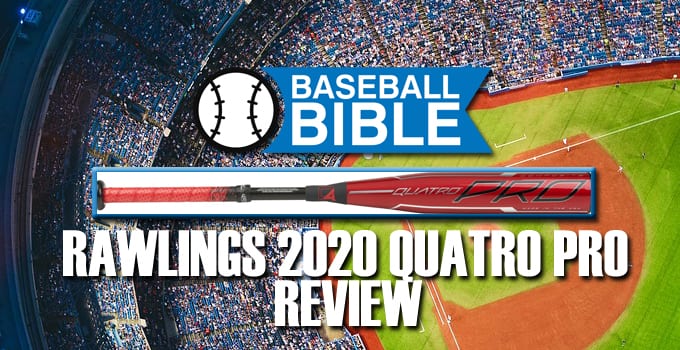 I’ve been using the Rawlings 2020 Quatro Pro a lot since I got it. Words cannot express the number of swings that I’ve put this bat through. I’m not the type to baby my bats because they were tools and thus meant to be used!

I now feel like I can confidently give you a quality review on this 2020 offering from Rawlings. How do this year’s offering stack up against the offerings from Easton, DeMarini, Louisville Slugger, and others? Let’s find out.

This bat is available in a range of drop sizes, from -3 to -12. Firstly, let’s check out the Rawlings promo video for this bat:

If you’re like me, you often find yourself researching the company history of bats before buying one. After all, how can you fully appreciate the performance of a bat if you don’t first familiarize yourself with the history of the company that manufactured it? Rawlings is one of those companies that was probably around before your grandfather was even born.

Its history spans more than a century — all the way to 1887. This has led some baseball enthusiasts to refer to the company as the “grandfather of baseball bats” due to its staggering age. It would actually be a centenarian if it were a person rather than a company. Even people like Mickey Mantle have used products manufactured by Rawlings.

The only reason they’ve managed to stay at the top of the market throughout these decades is that they always stay up to date on the latest technological advances. This emphasis on staying on the cutting edge of baseball innovation has ensured that every release is the best of its time.

This 2020 Quatro Pro is a composite bat. The debate between composite bats and whether or not they’re better than alloy bats has gone on for years—without any end in sight. That being said, it’s actually quite easy to analyze the pros and cons of each variant if you look at things through an objective lens. If you’re not well-versed in the differences between composite bats and alloy bats, then I’m going to give you a basic summary of the two so that you can choose one that fits you best.

The biggest benefit you’ll find from using a composite bat is that it’s lighter. This means that you’ll be able to have longer barrels on the bat without making it too heavy to swing effectively. In contrast, the weight of an alloy bat would become too great if you extended the barrel length beyond a certain point.

If you’re looking for longer bats but can’t bear to swing heavier bats, then a composite option like the Rawlings 2020 Quatro Pro is the best pick for you.

Of course, I’m fair enough to admit that alloy bats have their own fair share of benefits. There are some alloy bats that, while shorter than composite bats, manage to swing at faster speeds. That said, I don’t think the trade-off is worth it. I’d much rather have a bigger sweet spot than a little extra kick on my hits. You might feel different about this matter, but if you believe in the benefits that a composite bat brings to the table, then you should definitely consider the Quatro Pro for your next game.

This bat is balanced. If you’re rather new to baseball, you might now know exactly what that means. Without getting too deep into the nitty-gritty of baseball, let me explain the basics of balanced bats and their counterparts — end-loaded bats. End-loaded bats, as the name suggests, have more weight at the end of the bat. In contrast, balanced bats have their weight spread evenly across the barrel.

Each build has pros and cons, but which one you go for will ultimately depend on your playstyle. If you are a contact hitter, you should be looking for balanced bats. The fact that the bat’s weight is evenly balanced across the entire barrel means that you’ll be able to go for fast swings without sacrificing any control over your bat.

Some power hitters prefer end-loaded bats because there’s more material on the bat’s sweet spot. That being said, it’s a bit risky to take that route if you don’t have enough Babe Ruth-hitting power to back you up. Honestly, I prefer consistent accuracy over hit-or-miss power any day and thus tend to gravitate towards balanced bats like the Rawlings 2020 Quatro Pro.

If you thought that the material and weight distribution on bats are the only things that ballplayers debate, then you’re sorely mistaken. In addition to those two factors, the construction of the bat is also a heated topic in the world of baseball. Most people swear by their choices, and you’ll rarely find people switching from a one-piece bat to a two-piece bat—and vice versa.

That being said, there are a select few who admit that there are benefits to each type of construction. I consider myself one of those people. If you’re a power hitter like Babe Ruth, then you probably wouldn’t be buying a Rawlings 2020 Quatro Pro. You see, power hitters tend to favor one-piece construction bats because they retain all the power that you put into the swing. However, not everyone has the swinging power to properly wield a one-piece bat.

If your power is more on the average side — and there’s absolutely nothing wrong with that — then you should be going for a two-piece construction bat instead. When a bat is made out of two pieces rather than one, you’ll be able to utilize the whiplash effect and generate quicker swing speeds despite your average power.

Most contact hitters don’t have the strongest swings and thus tend to favor two-piece construction bats like the Quatro Pro over one-piece bats. There’s no shame in having average power, and you should use two-piece bats to supplement your swings rather than go for a one-piece bat in an act of pride.

Despite my roughing up, it still looks as good as new. There aren’t any visible dents on the sweet spot. The swings are fast, and you can definitely notice the whiplash effect due to its two-piece construction.

When you hit a ball with this bat, you’ll experience a pop that’s truly unique to Rawlings bats. I wish I could come up with something negative to say about the bat so I don’t seem like a shill, but sadly, I’d have to lie to make that happen. This bat has met my expectations and exceeded them spectacularly. It’s not the cheapest bat, but it’s well worth the price due to its performance.

The light composite construction ensures that I don’t exhaust myself even after countless swings, and its balanced weight helps me stay accurate even while going crazy with my swing speeds. The glossy red finish is also something to take note of. While the aesthetics of a bat don’t contribute to its performance, they do wonders for ballplayer morale. If a team is armed with shiny red bats, they’ll perform better like racers riding red Ferraris would drive faster based on their equipment’s look.

This bat has lived up to the Rawlings’ name and shattered all my expectations. I knew I would get something spectacular when ordering this beaut from a hundred-year-old company, but I didn’t expect it would be this fantastic. If you want a composite bat, get the Rawlings 2020 Quatro Pro.

Where To Buy The Rawlings 2020 Quatro Pro?