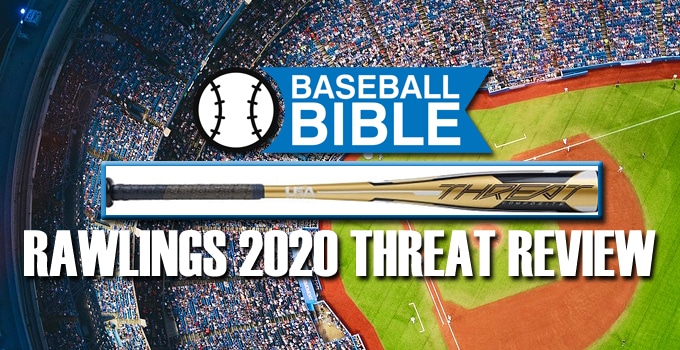 Today I will review one of the most promising youth bats on the market, the Rawlings 2020 Threat (USA), brought to us by the veteran manufacturer Rawlings.

While it may not be intended for use in the MLB, getting a bat that’s built well will help these young enthusiasts hone their skills so that they may one day be able to participate in the big leagues just like the ballplayers that inspired them to pick up the sport in the first place.

I’ve reviewed more bats than I can count over the years, and if there’s one thing I’ve learned over that time, you should pay as much attention to the quality of youth bats. Let’s get right into all the key details.

Editor’s Note: This review is not to be confused with the USSSA version of this bat, which can be found here.

The first thing that we’ll look at is the length. A bat that comes in multiple sizes is essential for any player, but this is even more crucial when we’re talking about youth bats since kids and preteens tend to have a wider variation in their height compared to adults, seeing as different people hit their growth spurts at different times.

You’ll be glad to hear that there’s no shortage of options to choose from if you’re going for the Rawlings 2020 Threat bat, as it comes in five different sizes. The shortest measures 27 inches, with the longest one at 31 inches. There are variants between the two that follow a one-inch increment pattern. Regardless of the player’s height, Rawlings is ready to accommodate their needs with a bat of the right size.

Youth tends to be a broad term, especially when used in the world of sports. Seeing as that’s the case, I like to specify the proper age range when reviewing a youth bat. In this case, the bat is made for players who are 12 years of age or younger, based on what the manufacturer has stated.

That being said, I think we should base these things more on the height of the ballplayer rather than their age since people don’t grow at an equal pace. If your kid is 13 or 14 years old but still fits the 31-inch model of the Rawlings 2020 Threat, then I don’t see any reason why they shouldn’t be using it, seeing as the construction is solid enough to accommodate adolescent swing speeds.

The bat weighs about a pound but is slightly under or over, depending on which size you buy. That being said, it’s actually very light in the hands. Of course, I will be biased when testing out the weight because I’m a full-grown ballplayer rather than a 12-year-old.

That’s why I brought it to one of the local ballparks in my area, had a few kids test it out during their friendly game, and then rated its weight afterward. Most of them said that the bat was surprisingly light and thus easy for them to swing.

Rawlings has always been known for creating bats that optimize the swinging power even with minimal input, and the Rawlings 2020 Threat, despite being made for young players, has definitely lived up to the manufacturer’s reputation in that regard.

The diameter of this bat is 2 ⅝ inches. If you’re unfamiliar with bats, then you’re probably wondering why that even matters. Well, the bat diameter does actually come into play when you’re looking at performance and usability.

I’d argue that bat diameter is even more crucial when you’re talking about young players since the right one can help them fine-tune their swing, while the wrong diameter can discourage them and make them drop the sport altogether. The diameter of this specific bat provides a larger sweet spot.

This makes it easier for them to hit the ball, ensuring that they stay motivated long enough to get good. The larger sweet spot also provides more mass, equating to power when they contact the ball.

After all, anyone who studied basic physics knows that force is equal to mass times acceleration and that when acceleration is constant (as in swing speeds), an increase in mass translates to an increase in force. This Rawlings 2020 Threat was definitely made with baseball’s physical and psychological aspects in mind.

Let me start by saying that I did test this bat out for myself, but only after letting younger ballplayers try it out. Why? Well, this bat was made for the youth, not for someone of my age and size. I was worried that my swing speed might be excessive (seeing as it wasn’t designed for me), thus damaging the bat and skewing the test results during the youth trials.

That being the case, as I mentioned earlier, the first people who tested this bat out were some young ballplayers who were having a friendly game at the local ballpark. I let different players use the bats in each inning so that everyone would A. get a fair shot at using them and B. be able to rate them accurately.

The feedback was pretty unanimous in that it helped them swing faster, hit the ball with more power, and also reduced the number of misses. Baseball was meant to be fun, especially for kids, so I asked all the participants if this bat made the game more fun for them.

The answer was, again, unanimous in that the hits they pulled off with the Rawlings 2020 Threat made the game more enjoyable for them.

Baseball is fun to watch, but it’s more fun to play. It may get a bit old for some if they’ve been swinging their whole life, but the sport is still novel to the young players who have just picked it up. While this isn’t the cheapest bat out there, I can certainly say that it’s worth the cost, as it will keep things fun for your kid.

Where To Buy The Rawlings 2020 Threat?