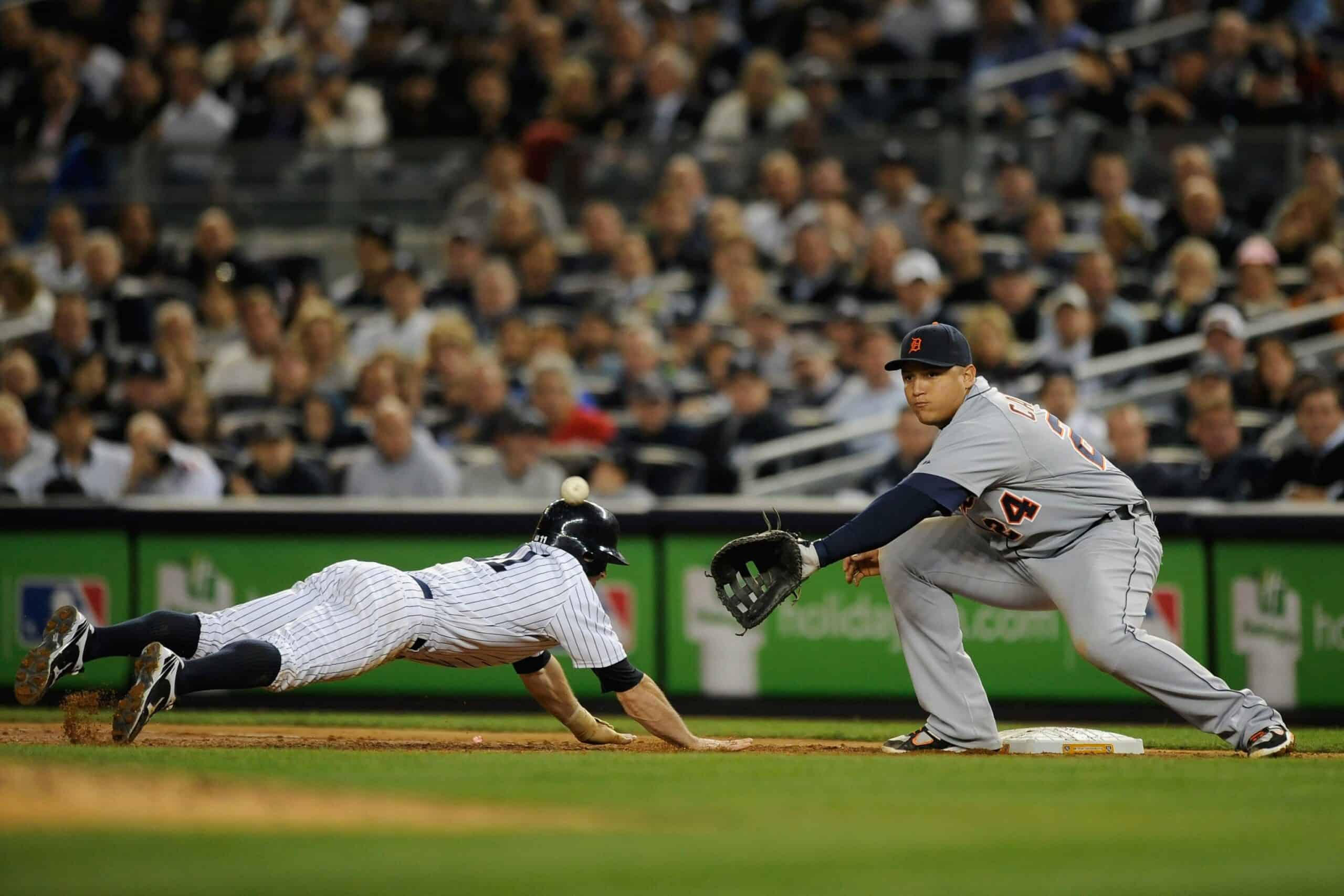 Pitchers have some wiggle room for faking a pickoff attempt, but not much. Pitchers used to be able to fake a pickoff to third base and then continue to pickoff at first. However, a recent rule has made this move illegal and eliminated it from the game.

After this change, there aren’t many fake pickoffs seen in a baseball game. They can step off in an attempt to fool the runner. However, any movement while on the rubber will be called a balk.

What is a pickoff attempt?

A pickoff attempt is defined as a pitcher attempting to get a baserunner out.

To do this, there must be a runner on base. The pitcher will then use a pickoff move to throw to the specific base. Between each pitch, a base runner gets a lead off the base. This opens up a window of opportunity for a pitcher with a good pickoff move.

Good base runners are consistently able to avoid being picked off. However, a great pickoff move can be unavoidable.

A pickoff can help the defense get out of a bad situation. For example, a pickoff can eliminate a lead-off single that started off the inning. It could also get the third out of an inning for the defense. It is a beneficial tactic that can be used in various situations.

The pitcher must be careful to follow the rules during the attempt. The rules are pretty strict, so you must be aware of them.

While on the rubber, the pitcher cannot move his body. To pick off, he must step off the rubber with his back foot. If he moves any part of his body before stepping off, it will be ruled a balk, and the baserunner advances to the next base.

Can pitchers fake a pickoff attempt?

Before a recent rule change, pitchers were able to legally fake a pickoff attempt to third base and then pickoff to first base. It is now illegal to do so.

The only base a pitcher is allowed to fake a pickoff attempt at is second base. He can use a couple of different moves to fake a pickoff. He must follow the same rules, such as stepping off before moving any part of his body.

It is illegal for a pitcher to fake a pickoff to first base. The play will be ruled a balk if a pitcher does this.

One popular way to fake a pickoff to second is through a designed trick play. A pitcher would act like he threw the ball to second and overthrew his man. The infielder would pretend to run into the outfield to get the ball.

However, the pitcher still has the ball. All of this would fool the runner into thinking there was a bad throw. He would then try to advance to third base, where the pitcher would easily get him out. Many teams have successfully run this play, which has paid off.

Benefits of faking a pickoff attempt

Faking a pickoff attempt can be a huge momentum builder for the defense. If run successfully, your team will receive a massive boost in confidence and momentum. You will also earn an out for your team.

One benefit is to deceive the runner, which leads to an easy out for your team. A successful fake attempt makes the runner think it is okay to leave the base. Once he leaves the base, the pickoff does its job, and the play succeeds.

A fake pickoff also has the ability to catch a runner off-guard. A fake attempt doesn’t happen often, so it may shock the runner for a split second. A split-second of confusion is all it takes to get a baserunner out.

There are many benefits to faking a pickoff attempt. However, you only receive them if you run the play successfully.

Risks of faking a pickoff attempt

A fake pickoff attempt is a challenging play to run. A lot goes into it, and it must all be executed correctly.

The pitcher cannot move his body until he steps off. The fielder must put himself in a position that fools the baserunner. Any mistake during this process leads to a failed fake pickoff.

If the pitcher moves before stepping off the rubber, a balk will be called. A balk allows every baserunner to advance to the next base. This means that a runner on third will be allowed to score on a balk.

As you can tell, you run a huge risk by running a fake pickoff attempt. This is especially true with more than one runner on base. A pitcher who makes a mistake during a fake attempt will lose confidence after the fact. This will likely affect his performance on the mound for the rest of the inning and maybe even the game. While the fake pickoff can be a momentum builder, it can also be a momentum destroyer.

Can pitchers fake a pitch?

Does a pickoff attempt count as a pitch?

No, only pitches thrown to the batter at home plate are counted as pitches.

Can a pitcher fake a throw to second base?

Yes, the majority of fake pickoff attempts happen at second base. The pitcher must remember to step off before beginning the attempt in order to avoid a balk.

Can a pitcher throw to the shortstop?

As long as the pitcher steps off the rubber, he can throw the ball wherever he wants. Sometimes the shortstop will cover second base on a pickoff attempt.

Pickoffs can catch runners off-guard, which leads to outs. Fake pickoffs can be even more tricky for base runners since they are so uncommon.

There are a lot of pieces that go into a fake pickoff attempt. All of them must be executed for the play to be a success. The strategy can pay off, but only if the defense is comfortable with what they are doing.

This should be practiced before it is implemented in a game situation. Everyone is involved in this attempt, so everyone must know their role. It is the coach’s job to take care of this. After practice and repetition, a fake pickoff attempt can be a great tool to have in your back pocket.