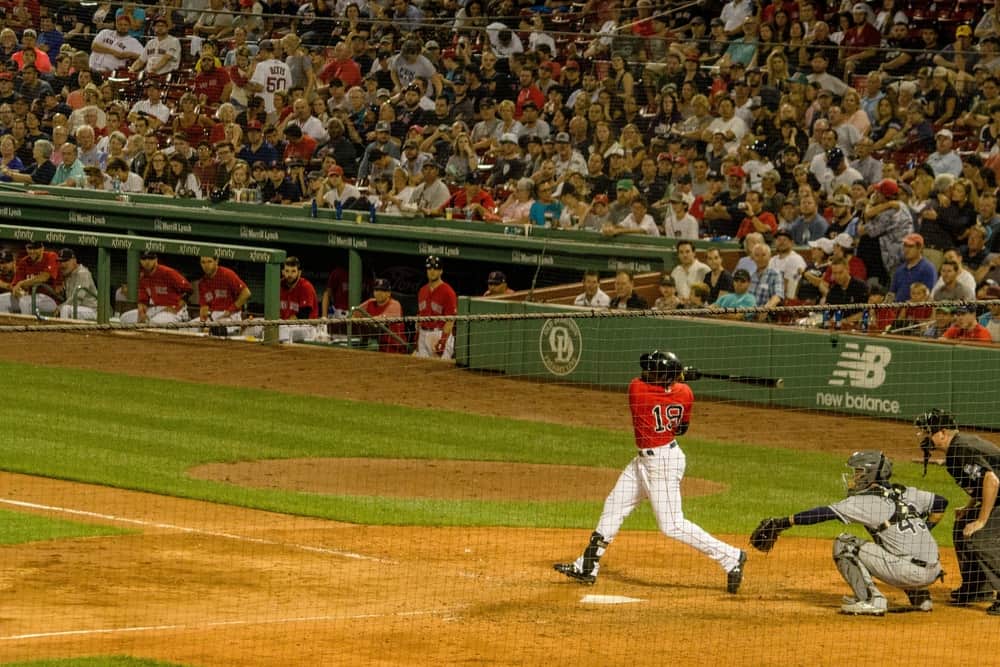 There are nine innings in an MLB baseball game. In each inning, there is a bottom half and a top half. Each team gets a turn to hit in every inning.

In order for an inning to end, the defense must get three outs. Once there are three outs, the inning is over, and the defense will now hit. Although three doesn’t sound like a lot, you would be surprised at how long some innings last.

How many outs are in an inning of baseball?

In a baseball game, each inning consists of three outs. Once there are three outs, half of the inning is over.

Each inning has two parts. There is a bottom half and a top half of all innings. The away team typically hits in the top half, while the home team hits in the bottom half.

For example, let’s say it is the top of the fourth with two outs. The road team just hit their third out. Now, the road team will go on defense, and the home team will hit the bottom of the fourth inning. This process continues until the ninth inning. Every baseball game has nine innings unless the score remains tied or the home team is winning at the end of the top of the ninth.

How outs affect the game

Outs control every situation of a baseball game. The number of outs determines each team’s style of play as well as their goal.

If there are two outs, the offense is now under much more pressure to keep the inning alive. On the other side, the defense will have momentum and stay focused on getting the final out.

Once the ninth inning is over, the team with the most runs wins. Each team gets 27 outs in a baseball game. In total, there are 54 outs in every game.

While there can be some confusing situations, no team is granted more than three outs. One of these situations is a dropped third strike. If a batter strikes out, but the ball bounces past the catcher, the batter can run to first base to try and beat the throw. If he does, he reaches safely but is still given a strikeout on the stat sheet.

However, the strikeout does not result in an out for the defense since the throw did not reach first base in time. In the event of a fielder’s choice, this means the defense sacrificed one out to get another.

While every game has 54 outs, some games may have more. Extra innings can occur if the score remains tied after nine innings. There is no limit to the number of extra innings that can be played.

Some MLB games have gone longer than 25 innings. Each inning remains the same in this case, as the defense must get three outs to end the inning. The rule of three outs remains consistent throughout every part of the game.

Can a pitcher record a strikeout and not get an out?

Yes, if the strikeout bounces in the dirt, then the batter can make an attempt to reach first base. If he does so before the throw, he reaches safely but is still given a strikeout in the stat book. The defense does not receive an out for this.

How many outs are in an inning of Minor League Baseball?

Every inning in a Minor League Baseball game has three outs.

What’s the fastest way to get an out in baseball?

The fastest way to get an out is by the batter swinging at the first pitch and getting out. Another fast way is through a 3-pitch strikeout.

Do MLB teams need at least 27 outs to win during the playoffs and the world series?

Nothing changes in the playoffs when it comes to outs. Each inning consists of 3 outs. Each game has nine innings, which allows 27 outs for each team.

If an inning goes past three outs because a catcher dropped the third strike, does the pitcher get credited with a strikeout anyway?

Yes, the pitcher is awarded a strikeout whether the ball is caught or not. Once the player swings and misses on the third strike, the strikeout is automatically given regardless of the pending result.

To understand the game of baseball, you need to understand how outs work. You cannot end an inning as a defense until you get three outs. How you get these three outs is irrelevant—you just have to get them.

For an offense, each inning you have three outs to work with. It doesn’t give you much room for error if you want to have a productive inning.

Each baseball game consists of nine innings unless there are extra innings. This adds up to 27 outs for each team and 54 in total for every baseball game that is played. “Getting outs” is the name of the game.