Skip to content
First base is a key position in the infield, and one of the most important roles on any baseball team. 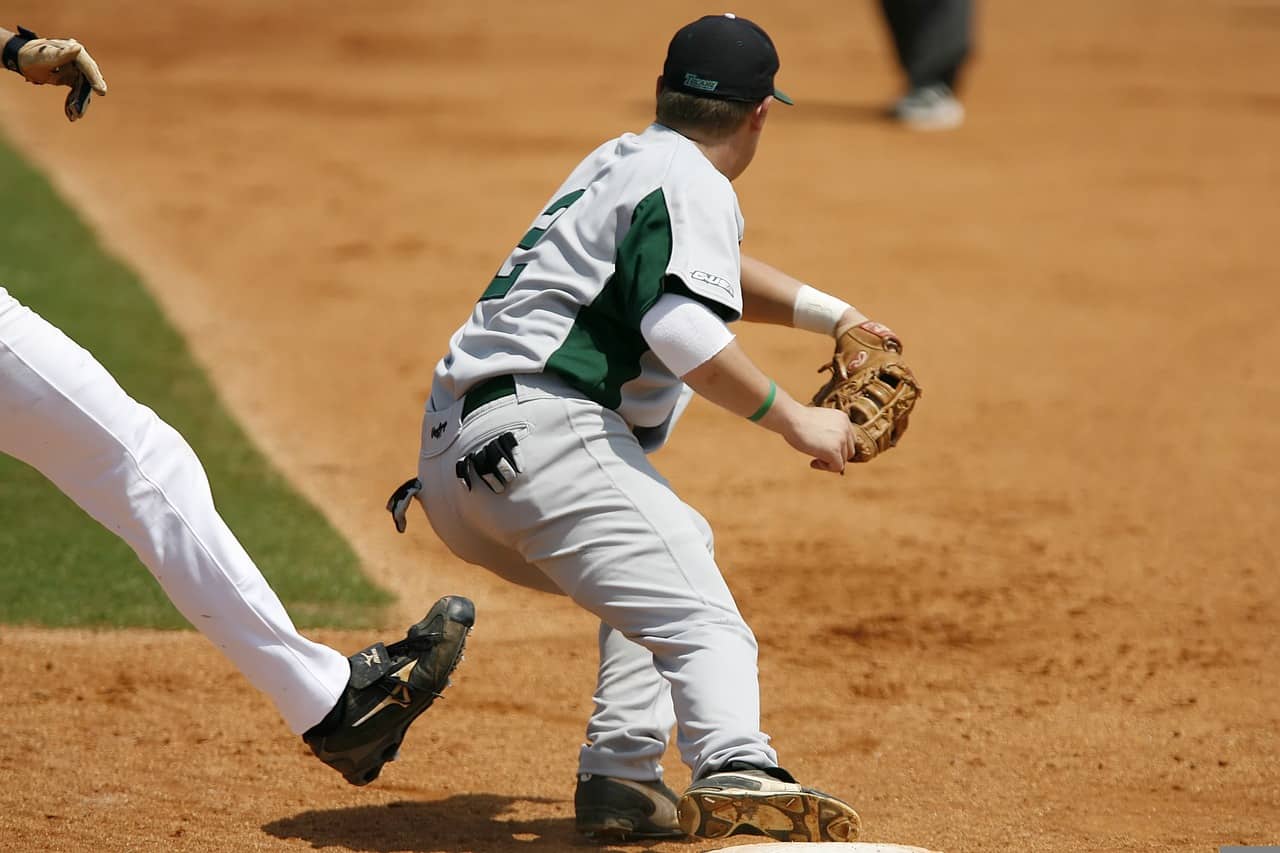 How to play first base

Unlike many other positions, first base has its role focused on one main thing—catching the ball. The first base’s main job is to have a foot on the base and catch the ball at the same time.

Many balls are hit in the infield. If one hits the ground, the ball will almost always be thrown to the first baseman.

What makes a good first baseman?

A good first baseman can catch and field consistently. Most of the time, the first baseman will be responsible for capturing the balls thrown at them.

Having a bad throw come to the 1B (first baseman) is also normal. If so, the 1B must find a way to still catch the ball even if he has to scoop it out of the dirt.

Another quality trait to look for in 1B is being fairly quick. Any position in the infield requires quickness. This is especially true for the two corner infielders, 1B and 3B.

How important is the first base?

First base is indeed an essential position in baseball. More than half the outs in a baseball game are recorded at first base. This is due to how many groundballs are hit to the infield.

When a groundball is hit to the infield, the 1B must run and cover the bag while proceeding to catch the ball. The importance is evident in this position, as any mistake proves costly for the team.

A first baseman must also be able to field or catch any ball hit at him. This could be a fly ball or a ground ball. Every team needs to have a reliable first baseman to be successful.

Is first base hard to play?

First base is not too hard of a position to play. While roles are similar, the focus is mainly on one specific skill.

You can be successful at first base if you can catch the ball. It can be easy to overcomplicate things, but the 1B is not too complex.

First base is not a hard position to play, especially if you have good hand-eye coordination. This position is known for having some of the strongest and biggest guys on the team.

With that being said, they are all still able to move at an efficient pace. Athleticism is still required for this position, just like it is across the whole diamond.

What does a first baseman do?

A first baseman has a couple of different roles, just like any other position in baseball.

The 1B must hold on to any base runner at first base. The 1B will stand on the bag to hold a runner until the pitch is thrown.

If a pitcher wants to attempt a pick-off, he will throw over to 1B. The 1B must catch the ball and apply a quick tag.

It is also the job of a 1B to be a cut-off man for any throws to home plate from right field. With that being said, the primary role of a 1B is to catch balls thrown by infielders.

These throws usually come after a groundball is hit in the infield. A 1B can also field any ball hit to him, whether in the air or on the ground.

What skills do I need to play first base?

You must possess excellent hand-eye coordination to play first base. A variety of throws will be coming your way, and you must be able to adjust according to the throw. You can’t expect every throw to be perfect, or you will constantly catch yourself off-guard.

A first baseman must also possess a skillset of quickness. This is due to the many hard-hit balls that come towards 1B throughout a game. Without speed, routine outs will turn into base hits for the opposing team.

A strong arm isn’t as important but is something that never goes unappreciated.

How do you practice being the first baseman?

You can practice being a 1B by playing catch with a friend or teammate. By playing catch, you will perfect your ability to catch every ball.

You should also try and get your partner to make bad throws purposefully. This will improve your reaction time.

You can also have a friend hit you with ground balls to work on your hand-eye coordination. You don’t need to work on many drills to be successful at 1B.

Lastly, you can work on your short hops. A short hop is when a throw is short and bounces right in front of you. In this case, you must scoop the ball with your glove in an upward motion.

One way to work on these is to use a tennis ball and a brick wall. Try and catch the ball immediately after it makes a bounce.

Where is the first base located?

Can I use a normal glove to play first base?

No, you cannot use a typical glove to play first base. They make gloves specifically for 1B, which are first baseman gloves. These gloves are bigger than your normal ones since the prominent role of a 1B is to catch the ball. Having a bigger glove makes it easier to reach any errant throws. Someone who used a normal-sized glove at 1B would have a difficult time compared to one with a 1B glove.

Do I have to be big to play first base?

No, you do not need to be big to play first base. There have been many guys who were successful at this position but were not impressively big. The main reason many bigger guys are found here is their offensive skills. Most of these guys are dominant offensively but haven’t figured things out on the defensive side of the ball. Any size player can play 1B and be successful at it.

More than a simple position

The first base is more of a simple position regarding duties and responsibilities. The main job is to catch throws while having one foot on the bag.

While this is the leading role, a 1B will be faced with a variety of situations that he must act on. For example, a 1B must field a ground ball that is hit to him and either tag first or make a throw to someone covering the bag.

Things aren’t as complicated at first, but this can still be a tough position to get down.