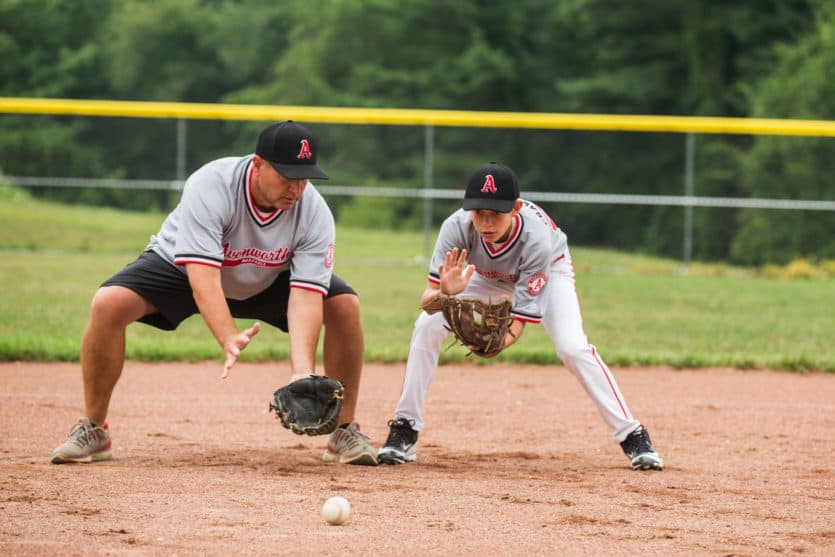 Before you jump into drills, it is important to establish ground rules for practice. Players need to have a routine that they can follow. Safety is also paramount, whether you are in a gym or on the field. Any time you run drills, there is a potential for injury or accidents. While procedures won’t eliminate all risks, they do help mitigate them. Always have a practice plan and an emergency plan for your players.

Let’s talk about equipment first. Part of your preparation as a coach (or maybe a parent helping at home) is to have the equipment you need to run drills. One of the best things to have as a coach is an assortment of bags or buckets to carry baseballs.

Depending on what you have available to you, there are several types of baseballs that you can use to practice. The most obvious is standard baseball.

In addition, you may also buy or borrow Incrediballs (or soft cushioned baseballs)—these are baseballs that are much softer. A rag ball will bounce and have a bit more give to it when it comes into contact with things. This makes fielding a little less intimidating for young players. It also enables you to hold practices indoors.

Tennis balls are also an option for soft-fielding drills. The only problem with tennis balls is that they can bounce a bit more for grounders.

One of the simplest ways to practice and reinforce good habits is to start with soft grounders. No matter the level, you will see players taking ground ball practice.

With youth players, a simple drill is to have players pair up and roll grounders to each other. If you start this drill barehanded, you can emphasize players using soft hands and looking at the ball with their hands. The grounders should be soft and from a close distance.

Remind players to take their time and start in a good stance. This drill should be about focusing on the basics. The partner rolling the ball should simply roll the ball to the fielding hand.

After each player has had a few reps as a warm-up, they should do the same drill with a glove on. With the glove on, players should watch the ball enter their glove and then cover it with their throwing hand.

Another way to emphasize mechanics is to have players kneel down with gloves on. They should keep their shoulders square and their heads up to see the ball in their mitt.

For younger players, it is probably best to keep the count to 10–12 reps and then switch.

When players get the hang of the fielding position, adding more movement to the drills can be fun. Place two cones about 6 feet apart. Have the player start in the middle and then roll grounders that move the player from side to side.

When it starts to get predictable, switch it up. In other words, double up on rolling to a cone if the player is predicting where the ball will go rather than reacting to the ball. After catching the ball, they should drop it off to the side to prepare for the next ball.

What you want the player to focus on in this drill is starting in a ready position with their glove out and ready to field.

In this next cone drill, you can use three cones to create a barrier of sorts for the player. The goal here is to exaggerate the route that players take to the grounder. You can use three or more cones to make a backward “J.” The player should start at the curve of J and follow the cones up towards the high point to field the grounder. Practicing this route can help players with their footwork. Young players need to learn to get their bodies in position to field. This drill can help them unite their footwork with their glovework.

Playing Pepper is another great way to work on fielding. This drill works by having a single batter surrounded by a semi-circle of about four fielders. The fielders stand about 15-20 feet away from the batter.

An important safety notice: the batter is not taking full swings. Instead, the batter is taking short, controlled swings. This is a great drill to use with incrediballs or other soft baseballs, especially if you have younger, more inexperienced players. It is also wise to protect the batter with a helmet.

The goal of the hitter is to lightly hit grounders starting at one end of the circle and working all the way to the other end and then back. The ball starts with the first fielder, who lightly tosses the ball to the batter, who attempts to hit the ball to the next fielder. The batter is trying to keep the ball on the ground. The fielders are trying to always keep the ball in front of them. If done safely and with supervision, this drill can become a fun, fast-paced one. Emphasize to the fielders to try and keep the ball in front of them and knock it down when necessary.

A fun drill to end practice with or to use as a warm-up before a game is “home and follow.”

The infielders take their positions. The coach hits ground balls to each player (one at a time). The fielders then field the ball cleanly and make a throw home. The catcher receives the throw from the fielder. As soon as the fielder makes the throw home, they “follow” the throw by running toward the catcher, who rolls a grounder to them. The fielders field the ground, get themselves in a position to make a good throw, and throw the ball first. After they throw to first, you can have them return to their position or run off the field.

A pitcher or utility player can be used to fill in for the first baseman to allow them to make a throw to a player covering the bag. This is an excellent drill for fielders because it is a fielding, throwing, and agility drill rolled into one. It’s also a lot of fun.

Players and coaches can find drills to be fun, challenging, and rewarding. One of the best things you can do as a coach is to explain why you are using particular drills and what skills you are working on. Also, give the players good feedback, even when they are doing the drills well. Let them know what improvements you have seen in them and their potential if they keep working.

Above all else, be sure to have a plan for where, when, and how you will do drills. Safety is paramount. Make sure your instructions are clear and that players understand how the drill works before you run it at full speed.