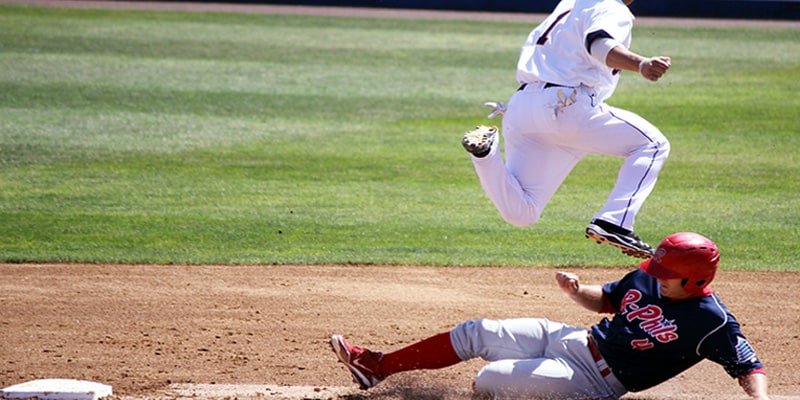 The double play, also known as a “twin killing” or “turning two,” is one of the more impactful plays in a baseball game. It occurs when a defense can produce 2 out of 3 outs for a half-inning on one play. A double play can be instrumental in getting pitchers out of sticky situations. Because of this, it is commonly referred to as “a pitcher’s best friend.”

What do the numbers mean in a double play?

When scoring a baseball game, each fielder is assigned a number that corresponds to the defensive position they play on the field. The list is as follows:

When referencing a double play, the numbers will indicate the order in which the players touched/caught/received the baseball.

We will now go over several typical double play scoring patterns and a unique example. It is important to note that these explanations show how these plays TYPICALLY happen, but part of the beauty of baseball is there are multiple ways for these plays to occur.

The scoring order simply identifies the fielders who took part in the play and the order in which they possessed the ball.

A 6-4-3 double play is likely the variety you will see most often on the diamond. It occurs when a runner is on first base, and the batter hits the ball to the SS. The SS will field the ball and feed/pass/throw it to the 2B, who will already be standing on second base or on his way to the bag (covering). The 2B will then be sure to step on the base with the ball still in his possession before relaying it to the first base, where 1B will receive it before the batter reaches. If the ball reaches both bases before each runner, the play will result in putouts for both players. SS→2B→1B

Another common variety of double play, the 4-6-3, is similar to the 6-4-3 above. The primary difference between the two is that in  4-6-3 scenarios, the ball is hit to the 2B, who feeds the ball to the SS covering second base instead of the other way around. The SS then tags second base with the ball in their possession before relaying it to first, just as the 2B would in the 6-4-3. 2B→SS→1B

This double play, sometimes referred to as going “around the horn,” occurs when a runner is on first base, and the ball is hit to the 3B. The 3B will throw the ball to the second base, where the 2B will be waiting to step on the bag and relay the ball to the first base for the second out, provided it reaches the base before the runner. 3B→2B→1B

Compared to the 5-4-3 variety, this double play further illustrates the role of the position numbers in the scoring of the play. On the field, this double play will often look nearly identical, but the SS will cover the second base bag instead of the 2B. 3B will field the ball and throw it to the SS, who will tag second base and relay on to first base for the second out. 3B→SS→1B

Here we have our first genuinely unique example. This play would likely indicate a rundown situation where a baserunner or multiple baserunners were caught up between bases. 8 is the number for the Center fielder, who would have no reason to be the final player involved in the double play without coming into the infield to cover a base in a rundown scenario. This scoring indicates that the ball was initially fielded by the 1B, thrown to the catcher for either a force or tag out, and then ultimately thrown to the Center fielder for the second force or tag out. The St. Louis Cardinals turned this variety of double play in the fall of 2020 for the first time in MLB history, so don’t expect to see this play out too many times in your life.

Does there always have to be three numbers when scoring a double play?

No – any amount of numbers can be used to score a double play. A scorekeeper may use as many or as few numbers as needed to tell the story of what happened and who touched the ball in the play.

What is an unassisted double play?

A single number can indicate an unassisted double play where a fielder caught a line drive and then tagged a runner or stepped on the bag from which the runner had departed early.

Are there other types of double plays?

In a rundown situation where multiple relay throws occur and many fielders get involved, you could see something like a 3-2-5-4-2-8-6 double play. If you’re curious, that’s a 1B→C→3B→2B→C→CF→SS double play! Of course, new things happen in baseball all the time, so virtually any scenario is possible. Another common possibility for a double play is the “strike-out, throw-out” double play. This occurs when a baserunner attempts to steal a base and is thrown out on the same pitch that strikes out the batter.

What is the rarest double play in baseball?

No double play is definitively the rarest in all of baseball, though some quick searching will yield some remarkable occurrences. Unassisted double plays are somewhat rare in their own right, but Oakland A’s pitcher Kendall Graveman once turned a 1-unassisted double play by fielding a ground ball and ultimately tagging out two runners on the same play. That is not likely to be replicated very often.

What is the most common double play?

The 4-6-3 or the 6-4-3 double plays tend to be the most common as they can occur any time a runner is on first and the ball is hit to the middle of the infield.

Who made the first double play ever?

The earliest known use of the term double play comes from a 1902 game between the Chicago Colts (now Cubs) and the Cincinnati Reds. The double play was turned by Colts Shortstop Joe Tinker, Second Baseman Johnny Evers, and First Baseman Frank Chance. This trio became known for the double play, inspired the poem “Baseball’s Sad Lexicon,” and were all inducted into the Baseball Hall of Fame together in 1946.

How many outs are made in a double play?

There are virtually endless possibilities for turning a double play, but regardless of how it occurs, it is one of the more exciting fielding plays in baseball. It is something hitters avoid, like the plague, and pitchers search for like a long-lost friend. Chalk it up to base running errors, slick fielding, or simply being at the right place at the right time; either way, they’re all worth two outs.