Skip to content
Grip it and rip it: How choking up on your baseball bat can increase control and speed 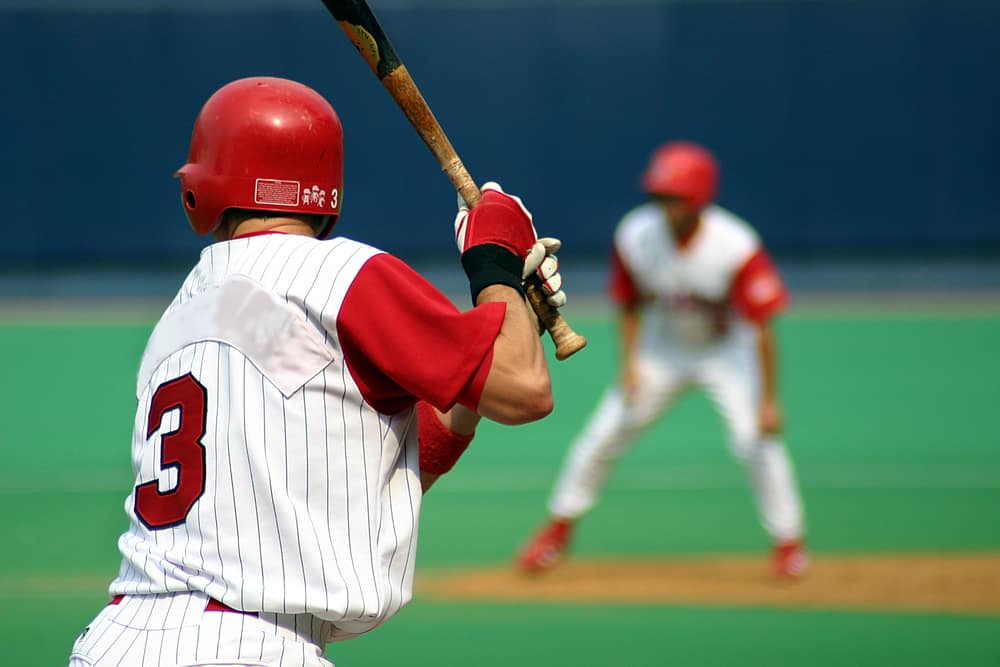 The term “choke up” has several meanings in popular culture, but in baseball, choke up has a specific meaning for hitters. This is not to be confused with the popular definition of “choke” in sports when someone is expected to do well and does not. When a hitter chokes up on the baseball bat, it simply means moving their hands higher on the bat’s grip to get closer to the barrel.

So, what’s with the name? When a player grips the bat, it is with a tight grip, so to choke up in a baseball sense means to grip the bat higher up and as tight as you would for a chokehold.

The purpose of choking up in baseball

There are several reasons hitters choose to choke up on the bat when at the plate. The main reason hitters choke up on a bat is to change the weight distribution of the bat in their hands.

Moving the hands up makes the bat feel lighter because there is less weight above the hands and a little more below them. This gives hitters the ability to swing the bat faster than if they gripped it on the bottom of the handle. Why is that?

It is also a good strategy to use if the pitcher throws hard. If a hitter has had a good game, but a new pitcher comes in that throws much harder, they must adjust their swing.

To adjust for the faster pitch, hitters will choke up on the bat a few inches from the bottom to allow them to get the bat across the plate faster and with more control. This is also important in situational baseball. There are times in games when all that is needed is a base hit to win the game. To increase their odds of getting that base hit, hitters can give themselves an advantage by choking up.

How to choke up on a baseball bat

To properly choke up on a baseball bat, there are a few steps that hitters must follow:

First, when choking up on a bat to gain bat speed, most hitters will move toward the back of the batter’s box to give themselves a little extra time to see the ball. They will also move closer to the plate. This is important because choking up on the bat shortens the bat coverage area, so a pitch outside of the plate will be harder to hit when choking up.

With the stance set, hitters that choke up for faster bat speed and control will drop the barrel of the bat to a point where it is level with the ground rather than pointing straight up in the air. This is another technique to get the bat around faster by removing the motion of using the arms and shoulders to bring the bat downwards to the strike zone.

Once the stance and bat are in the correct position, hitters will move their hands anywhere from 1–3 inches above the bottom handle of the bat. If they choke up more than that, they risk not being able to hit outside pitches that may be called strikes. The grip will be the same as a normal grip, but some players have been known to change their choke up grip if the situation calls for it.

The benefits and drawbacks of choking up in baseball

When you choke up on the baseball bat, you are changing how you use your equipment, so obviously, there will be benefits and drawbacks to doing it.

First, the benefits are clear and well-documented. By choking up on the bat, hitters change the weight distribution, and with less weight above their hands, it is a scientific fact that hitters can increase the speed at which the bat crosses through the strike zone.

On the other hand, by choking up and having less of the bat to use, hitters will give up the hitting area that a normal grip would cover. So, when hitters choke up, they move closer to the plate and toward the back of the batter’s box.

Additionally, aside from having a smaller coverage area, many claim that a swing with a choked-up grip will not generate as much power as a standard grip. While studies show this is true to a small degree, one must remember that all-time MLB home run champion Barry Bonds has used a choke up grip for his entire career. To learn why, watch the video below, and to help give you a sense of hand placement, look at the image below.

Do any MLB players choke up on the bat?

While not everyone chokes up, and some hitters claim they never will, look no further to find a fan of the choked-up grip than the MLB’s all-time Home Run King, Barry Bonds. Bonds was unique because he started choking up on the bat at a young age and kept that grip because it was comfortable. Regardless of how you feel about Bonds, no one can deny his method worked for him.

Does choking up make the bat lighter?

Choking up on a baseball bat does not make it lighter, but it makes the bat feel lighter to the hitter. The reason for this is the concept of weight distribution. If a hitter uses a 32-ounce bat, it does not matter if they choke up or not; they still must swing a 32-ounce bat.

Moving the hands up will not make the bat any lighter, but it can give the sensation of being lighter. When a hitter chokes up, the bottom of the bat is below the hands, and that weight does not need to be swung across the plate, which effectively removes that weight and makes the bat feel as if it’s 30 ounces or less.

While choking up has been a part of baseball for a long time, it is mainly used for situational hitting today. If you find yourself swinging late on pitches or having a hard time seeing pitches come in, the first thing coaches will have you do is choke up and step in a little bit.

While it may not yield home runs like Barry Bonds, hitters that make contact are the most likely to move on to play in college and the pros. Next time you are in the batting cage, give it a try. Move your grip up the bat a few inches, drop the barrel, and work on your inside-out swing. The scouts will be sure to find you after that.