Skip to content
Learn about the rules and history of a doubleheader in baseball. 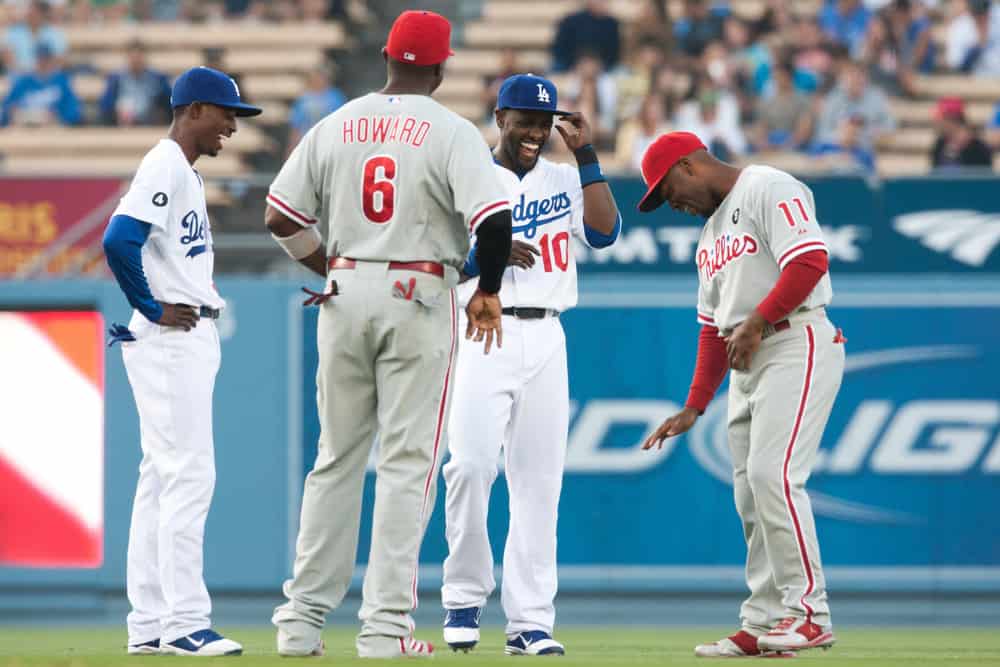 You may have heard of the phrase “doubleheader” in baseball. What does it mean?

A doubleheader is a day when two teams play two baseball games. Although the occurrence is less frequent now, it still occurs. The reason and length of the doubleheader are often dependent upon several different factors but can be influenced by the level, the weather, and availability.

What does a doubleheader game mean in baseball?

What does a doubleheader mean?

History of a doubleheader in baseball

Historically speaking, the doubleheader originated as an opportunity for two teams to play each other twice—in the same town but in front of two different crowds. The way this would work is that the two teams would play the first game. At the end of that contest, the crowd would empty. Before the second game began, a new crowd would enter. So if you wanted to see both games, you would need to pay twice to enter.

Types of a doubleheader in baseball

It seems pretty simple to say that a double header is two games between two teams. There are several different types of doubleheaders. The reason for this is that the need for and value of doubleheaders have changed over the course of the years.

In the past, double headers were a routine part of the schedule. However, modern schedules are less routine and born mainly out of necessity because of scheduling.

The twi-night doubleheader is a doubleheader that has a later start than the traditional doubleheader. Short for twilight, this doubleheader begins late afternoon or early evening. There is a 20-30 minute break in between games.

According to MLB rules, the first game can start no later than 5 p.m. Fans are able to see both games with a single ticket. The stadium needs to be cleared out in between games. This type of doubleheader may be played in an open-air stadium in a climate that is too hot during the early afternoon.

The classic doubleheader is almost identical to the twi-night doubleheader. The only real difference is that it starts much earlier in the day. In this case, it is common to see a game time of 1 p.m. for the first game of the two-game set.

In the days before stadiums had lights, if the game went on too long, the second game would often get called on account of darkness. However, in modern times, teams can complete both games, provided the weather cooperates with games played in open-air stadiums.

These games can be beneficial to baseball clubs because spectators would need a ticket for each game instead of paying for one and staying for both.

Tripleheaders are the rarest of all. There have only been three true tripleheaders in the history of baseball. The current collective bargaining agreement prohibits the scheduling or playing of tripleheaders unless the first of the three games is the completion of a contest that has already started.

The teams’ schedules would also have to dictate the tripleheader as a necessity. Chances are you won’t see a tripleheader any time soon. Managers prefer not to put a team through that scenario because it could strain the pitching staff.

A few interesting points to consider–lineups and ejections are evaluated game by game. Even though the games occur on the same day, they are treated as separate games.

Why are there Doubleheaders in Baseball?

There are a number of different reasons why teams have doubleheaders. One of the biggest reasons is because of the weather. If your team is scheduled to have a three-game series against another team on Friday, Saturday, and Sunday, for example, and the Saturday game gets rained out, you could play a doubleheader to make it up. Weather is the primary culprit, but there could be other reasons, like power outages, safety concerns, or in some cases, a game could get postponed because of a local tragedy.

Originally, doubleheaders were a routine part of the schedule. Part of it was a novelty to sell to fans. In modern times, they are often necessary because of a tight schedule or travel crunch.

What is The Home-and-Home Doubleheader?

A home-and-home doubleheader is when you have a doubleheader between two teams, but the home team switches after the first game. This is usually done because of a rainout; the only opportunity to make up the game is when the original home team visits the opponent.

So for one of the games, the home team becomes the visiting team in their ballpark. This is so that teams can have the same advantage of batting last.

What is the longest doubleheader game in baseball history?

How long is a doubleheader baseball game?

A doubleheader consists of two games. Both games consist of nine innings (an exception here may be in lower-level leagues, where they may play fewer innings).

Do the same players play in a doubleheader?

This is up to the discretion of the manager. The pitchers will likely be different, but as far as positional players are concerned, that is up to the needs and matchups that the manager sees.

Are most doubleheaders splits?

Yes. For example, over the last three years, only one season saw 50% or more of the doubleheaders being swept by one team.

Do you have to buy two tickets for a doubleheader?

In most cases, no. If it is a day-night doubleheader, then yes, you will.