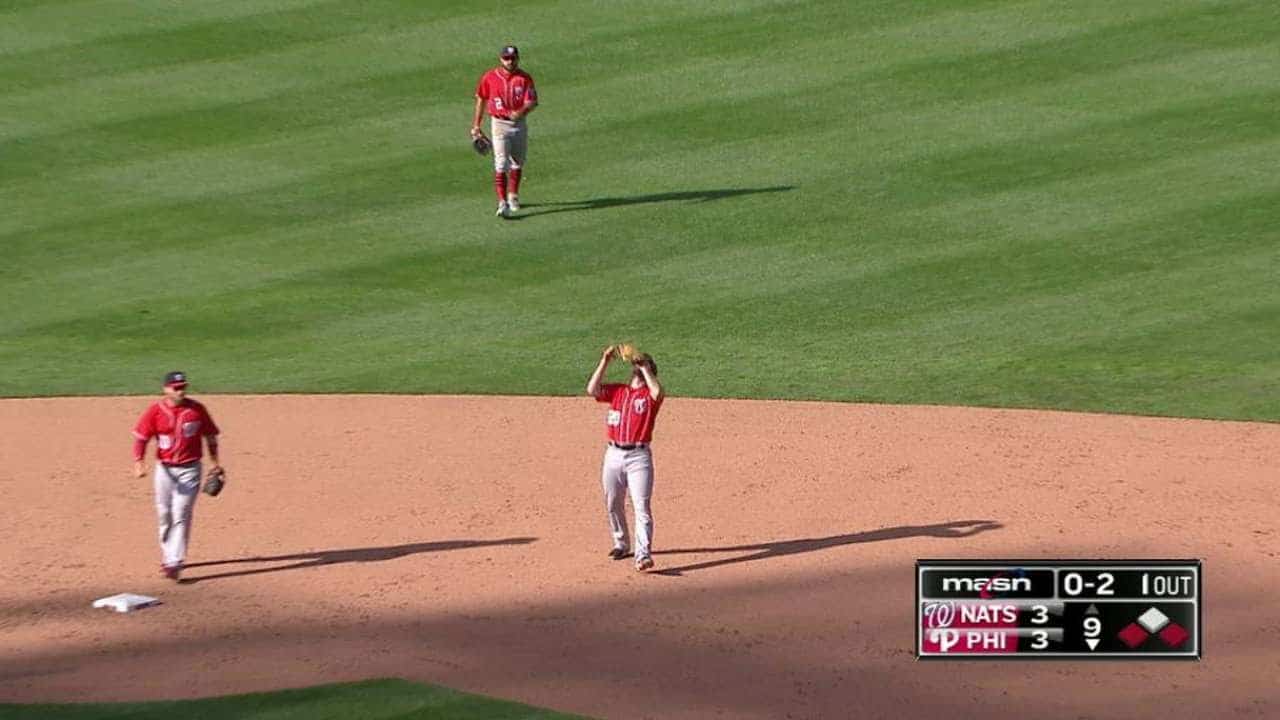 Not every ball hit high into the sky is destined to be a home run. If you remember the movie Major League, then you know the story of Willie Mays Hayes and his difficulties with the pop out. So, what causes a pop out? Several factors include the type of pitch thrown, the hitter’s swing, and the batted ball’s distance and trajectory.

Definition of a pop out

A pop out occurs when a batter hits the ball in the air, and an opposing defender catches it before it hits the ground. What makes the play a “pop out” versus a “flyout” or “lineout” is the height and distance of the ball.

As a rule of thumb, if a hitter hits a ball high in the air but it does not go past the infield or stays right on the edge of where the infield meets the outfield, then it is a pop out. If the ball travels further into the outfield, it is a flyout.

What confuses some people is the term “high in the air.” That statement can mean different things to different people, but the only opinion that matters is that of the official scorers. A safe way to determine if the ball went high enough is if it reaches where the scorer sits in the stadium. (FYI, they sit near the press boxes on the second level of most stadiums).

How a pop out is recorded

In the scorebooks, a pop out does not have to be distinguished from a flyout, so most official scorers will record a pop out in the book with a capital “F” for flyball, which is an alternate term for pop out. The position number of the player that caught the ball then comes after the F (for example, a 2nd baseman is identified as position #4), so a pop out caught by a second baseman is scored in the books as “F4”. The inning in which the play happened is also recorded.

Some scorers will also use a “P” if they want to. As expected, the P stands for Pop Out and is recorded the same way. Using the example above, the play could also be recorded as P4. Those scorers that use the “P” will only use that letter if the catcher, pitcher, or infield player makes the play. They will defer to “F” if an outfielder makes the play.

Examples of a pop out

An example of a pop out looks like the following:

While it may seem like a pop out is a simple play with little significance, we encourage you to think again. Watch the video below to see how simple pop-ups can cause quite a mess:

Importance of pop outs in baseball

Tracking pop outs in baseball gives managers and scouts good insights into how successful a pitcher may or may not be. In MLB, there is an official statistic known as the “pop-up rate,” designated by (PO%).

If a pitcher has a high pop-up rate, then one can safely assume that they get a lot of outs, as almost every pop-up results in an out at the major league level. But there can be a different takeaway from that stat. Pitchers with high pop-up rates almost always have high flyout rates as well. Pitchers with statistics like this have been known to give up a lot of home runs, so managers can perceive this important statistic in different ways.

Does the infield fly rule apply on a pop out?

Yes, the infield fly rule applies on a pop out, but only under certain circumstances. For a play to be designated as an infield fly rule, runners must be on base. When a batter hits a pop-up with runners on base, the umpire will automatically call the batter out, regardless of whether the fielder catches the ball or not. The umpire does this because players would purposely not catch the ball but deceive the base runners by making them think they were going to attempt a double or triple play.

If there are no runners on base, then no, the infield fly rule does not apply, and the fielder must actually catch the ball for it to be recorded as an out.

Ultimately, hitters, fielders, and baserunners must be situationally aware when a pop-up is hit in the infield. Watch what happens when you do not:

No, a pop out is not a hit. Even though the hitter makes contact with the ball (hits it), the answer is in the name of the play—it is a pop out. Any baseball phrase or statistic that includes the word “out” is not classified as a base hit.

Can you score on a pop out?

A baserunner can score on a pop out, but a batter cannot. With a pop-out, the batter is always out, but just like flyouts and lineouts, baserunners can tag up and advance after catching the ball. It is just highly unlikely—not to say that it has never happened before. Watch the play below:

From the examples above, you know that even with a routine play like a pop out, the best players can make something happen with the right situational awareness. As you explore situational awareness in baseball, you will see many references to baserunning and fielding on a pitch that is popped up in the air.