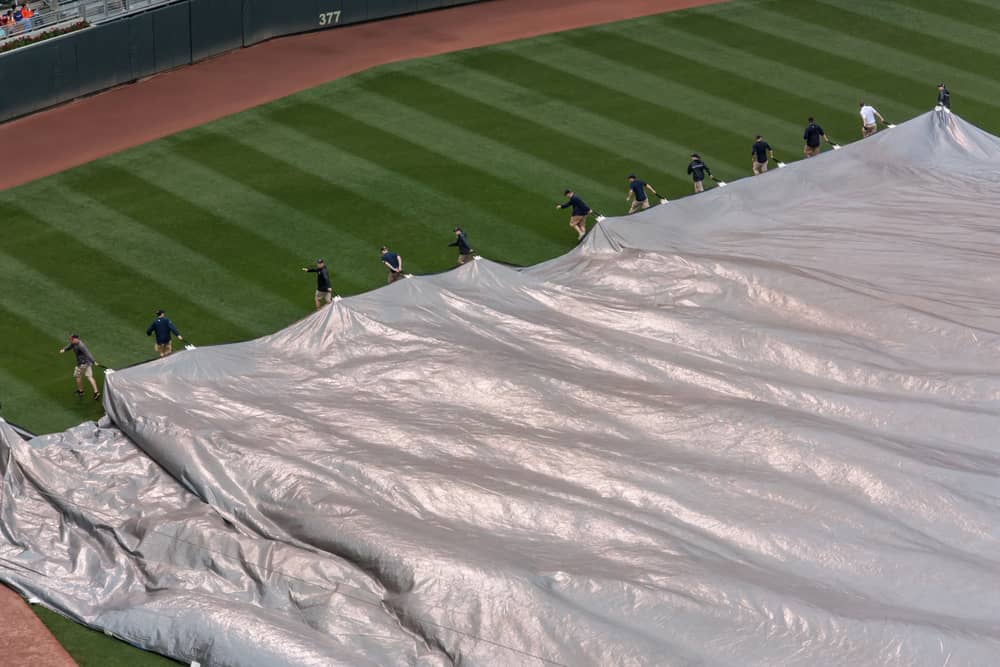 Have you ever attended a baseball game only to be greeted with an announcement that the game would be delayed due to rain? This experience can often feel strange, especially if you’re unfamiliar with how this works.

In this blog post, we’ll discuss what rain delays are and why they might occur in order to help demystify the situation. So whether you’re a baseball fan who wants a deeper understanding of the sport or just curious about when and why games get postponed, we have you covered! Keep reading for more information about rain delays in baseball games.

Rain delays are a normal part of baseball and happen more often in some areas of the country. But rain delays are just a part of the game unless a team plays inside a dome or stadium with a retractable roof.

A rain delay occurs when inclement weather causes the game to be paused or delayed. Both teams are sent off the field, a tarp is placed over the infield area, and the umpires will wait to see if the weather will improve so the game can resume.

What does a rain delay mean in baseball?

A rain delay in baseball happens when the game is stopped due to inclement weather. When this occurs, both teams are sent to their dugouts, and a tarp is placed over the infield area.

Baseball rules do not allow umpires to declare a rainout until they have waited 75 minutes to see if the inclement weather leaves the area. The game will resume once the weather improves and the field conditions do not pose an injury risk to the players.

What causes a baseball rain delay?

A baseball rain delay is usually caused by heavy rain and thunderstorms that force the stoppage of an official game. However, other weather conditions can make the game unsafe for the players. Besides rain, games are delayed because of lightning, extreme fog, hail, and snow.

Other factors can delay a game. A swarm of bees caused the stoppage of a Houston Astros and San Diego Padres regular-season game in 2009.

Can a rain delay occur before a game?

A rain delay can occur before a baseball game officially gets started. For example, if there is a thunderstorm in Chicago at 11:00 AM EST, but it will be out of the area at 2:00 PM EST, the Saturday 1:00 PM EST game between the Chicago Cubs and St. Louis Cardinals can be moved to 3:00 PM EST.

The Wrigley Field ground crew places a tarp over the infield to protect the dirt areas from the rain. It is common for umpires to declare a rain delay at the earliest possible time before the scheduled start of a game to allow players to alter their pre-game routine.

What was the longest rain delay in baseball?

The longest rain delay in baseball history was 7 hours and 23 minutes and took place at Comiskey Park in Chicago on August 12, 1990. The White Sox hosted the Texas Rangers on a Sunday afternoon, with the first pitch slated for 1:00 PM CST.

A steady rain delayed the start of the game, and since this was the Rangers’ final visit to the Windy City that season, the two teams waited until 8:58 PM CST to officially call off the game. Incredibly, an estimated 500 fans were still in the stands when the umpires ended the marathon rain delay.

What are the baseball rain delay rules?

The baseball rain delay rules were modified in 2020 and eliminated rain-suspended games that were erased from the books as if the game never happened. These games were rescheduled as part of a doubleheader, with all statistics from the original encounter disappearing into thin air.

Does the home team have a say in a rain delay or rainout?

The home team manager does have a say in a rain delay or rainout. According to baseball rules, before a game starts, the home team manager is responsible for deciding to delay or cancel a game due to inclement weather. The only exception is if the game is the backend of a doubleheader.

However, once the home team manager gives his lineup card to the umpire at home plate before the game starts, the umpire crew chief becomes responsible for deciding if a game should be delayed or canceled.

Reasons why baseball isn’t played in the rain

There are many reasons why baseball isn’t played in the rain. One of the most important reasons is player safety. If the dirt areas of the field become muddy and slippery, the risk of player injuries increases significantly. Another safety issue arises if pitchers cannot grip a wet baseball well.

Wet conditions affect player safety, which is the main reason that baseball is only played in light rain, which officials expect will not last very long. Rain and clouds also affect visibility and make seeing the ball more difficult. Whenever it rains, there is always the possibility of lightning strikes. Umpires will quickly delay a game if there is lightning in the area.

Rain delay versus rainout are two different things. A rain delay occurs when there is a temporary pause during the game because of rain, lightning, hail, or snow. The weather forecast usually indicates that the weather conditions will improve, and the game can be continued after a short delay.

On the other hand, a rainout is the same as a canceled game. Rainouts happen when inclement weather causes field conditions to be unsafe to play. Rainouts can also follow a rain delay when the weather conditions do not improve, and the game cannot be resumed.

How are rain delays determined?

Rain delays are determined by the umpire crew chief, who must wait 75 minutes before declaring a suspended game or continue waiting for the weather conditions to improve before resuming the game.

No, retractable roof stadiums do not have rain delays since the roof is closed during inclement weather. But there have been several instances where baseball games in domes have been delayed or postponed.

A 1976 game at the Astrodome was canceled after a storm flooded Houston and prevented umpires and fans from attending the game. Two games at Tropicana Field have been delayed because of power outages, and in 2018, the Blue Jays postponed a game against the Kansas City Royals when falling ice from the nearby CN Tower damaged the Rogers Centre roof.

What happens if there is a rain delay in baseball tickets?

If there is a rain delay and the game ends up being suspended, fans can use their current ticket or a voucher as a rain check. This will allow fans to attend the rescheduled game on the new date. Major League Baseball teams do not issue ticket refunds for suspended games.

How many innings do you have to play before a rain delay?

A rain delay can occur before the game or while the first batter is at the plate. No minimum number of innings must be played before the umpire crew chief can declare a rain delay.

A baseball rain delay can last as long as the umpire crew chief is willing to wait. However, umpires must wait at least 75 minutes to see if the weather improves. The longest rain delay in MLB history lasted 7 hours and 23 minutes.

How much does it have to rain to cancel a baseball game?

The amount of rain needed to cancel a baseball game depends on field conditions and the severity of the shower. A field that drains poorly could be unplayable after just an hour of heavy rains. On the other hand, a field with an infield tarp and a good outfield drainage system could be playable even after several hours of rainfall.

To play or not to play

Rain delays happen when the weather conditions force a baseball game to be halted due to heavy rain, extreme fog, hail, or snow. Baseball can be played in light rain as long as the field conditions do not become too slippery, which increases the chances of player injuries.

A rain delay forces the teams, umpires, and fans to wait at least 75 minutes before deciding whether to keep waiting for the weather to improve or to suspend the game and play on another day.