Skip to content
Get ready for the MLB season with Spring Training: a month-long event filled with exhibition games, player evaluations, and team preparations. 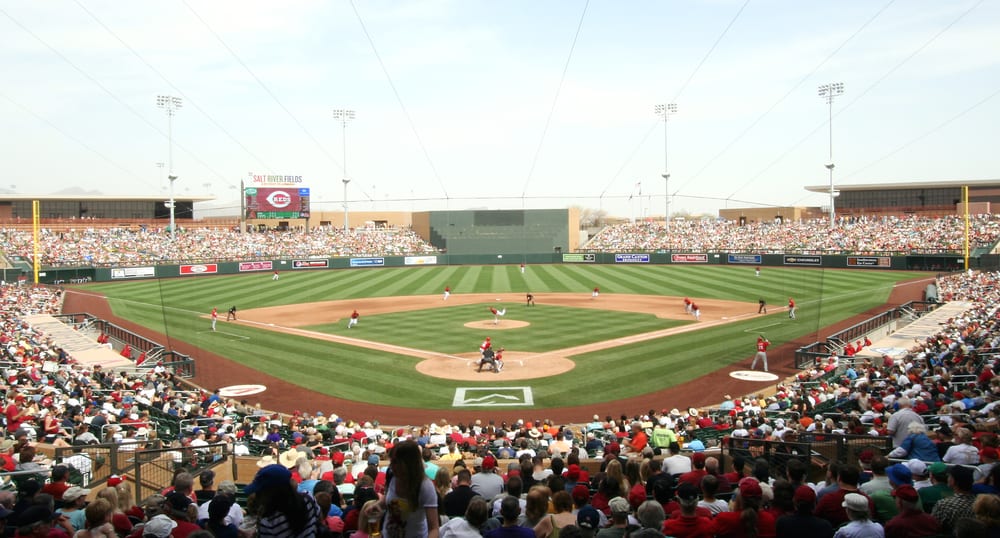 Spring Training is an experience like no other. Once a year, players and fans get to experience a unique month of baseball. The regular season in the MLB typically begins in the first week of April. Spring Training takes up nearly the entire month of March.

In preparation for the 162-game season, all MLB teams are assigned to a league where they will play Spring Training games. Some games are played in Florida, while others are in Arizona. The level of effort is substantially low, but the fans get to see their favorite team play and receive autographs.

The history of Spring Training

Spring Training has been a part of the MLB for over 100 years. In 1870, the Cincinnati Red Stockings and the Chicago White Stockings held their own spring games. This was the first form of spring training.

Spring Training didn’t become an organized ordeal until the early 1900s. The first organized Spring Training league was founded in the state of Mississippi, while the Cactus League was formed in 1947. However, only a few teams were involved compared to the 15 in today’s game. Starting in the 1950s, some teams started gradually moving their preseason training to Florida. This led to the creation of the Grapefruit League.

As time went on, Spring Training became a booming business. Money has continued to roll in for both of these leagues, mainly through ticket sales. Fans who didn’t live near their favorite teams now had the opportunity to see their favorite teams in their home state. With the stadiums being smaller, fans were also able to get much closer to the field at a much lower cost.

The purpose of Spring Training

The MLB regular season is 162 games long. It is the longest season of any professional sport. While you can stay in shape by practicing, nothing compares with real-game action. The MLB decided to implement a month of exhibition games to keep players in shape and prepare their bodies for the long haul ahead of them. While injuries are usually unavoidable, some can be prevented or at least lowered in severity.

Spring Training is also used to evaluate players. Coaches use these games to let their young guys play. Their performances in these games usually decide whether or not they make the regular-season roster. There are only a certain number of roster spots, so the competition is blazing for a spot.

Spring Training may be loads of fun for the older and more established guys. However, the young guys are fighting for their future.

Exhibition games also help players create bonds with their teammates. Since the games are outside of their usual location, players are forced to live there for a month. This means that teams are constantly around each other for the entire month of March. It is always a good thing to spend quality time with your teammates.

The format of Spring Training

Some teams have their actual regular-season Opening Day on March 30 or 31. Teams typically play anywhere between 4-6 games every week during Spring Training. It is a rather busy schedule, but lineups constantly change to keep players rested and healthy.

With so many games, practices aren’t very common during the month of March. These games are used as their practice for the most part. Teams might have some form of organized practice on their off days, but the level of intensity is substantially low. MLB players are talented enough to make adjustments in-game and do not need extra practice to fix their mistakes. However, extra work is always a good thing when it comes to fitting into the schedule.

The benefits of Spring Training

It is always a good thing to be around your teammates. Spring Training allows for nearly four weeks of teams being together to form a bond for the upcoming season.

Coaches can get a feel for how their team works and what their assets are. They also use this time to try new things, such as lineups and rotations that haven’t been seen before.

Another benefit of Spring Training is the opportunity it provides for the fans. Stadiums are much smaller, so fans are able to get closer than they ever have. Spring Training also allows for special opportunities to get autographs before and after games. Spring Training has a multitude of benefits that fans and players greatly appreciate.

The future of Spring Training

There were many parameters set up to ensure the safety of the fans and players during the pandemic. As you know, COVID hit the United States for the first time around March 2020. This hit directly at the start of the 2020 Spring Training.

However, the MLB did a fantastic job of handling the situation effectively. The MLB has considered testing new rules in Spring Training games. Since the results of the games are irrelevant, they provide great opportunities to test new things out.

When does Spring Training start and how long does it last?

While these games have some value, they have no implication on a team’s record. They are not counted toward anything relevant.

What happens to players who don’t make the team during Spring Training?

Players that don’t make the team are sent down to the minor leagues. Each MLB team has an A, AA, and AAA affiliate. The AAA league is the most competitive and closest to the MLB.

How many innings are in Spring Training baseball?

Spring Training games are identical to regular-season games in terms of length. All games are nine innings long.

Do MLB players get paid for Spring Training?

No, they do not. MLB players do not receive paychecks until the first week of the regular season.

Spring Training is a wonderful time that fans all across the world look forward to. Some families may not be able to travel to see their favorite team during the regular season. Spring Training provides an opportunity with cheap tickets and easy access to games. Players can also use this time to work on their game in a less intense atmosphere. These games shouldn’t be going anywhere anytime soon. These games are a bright spot for Major League Baseball.