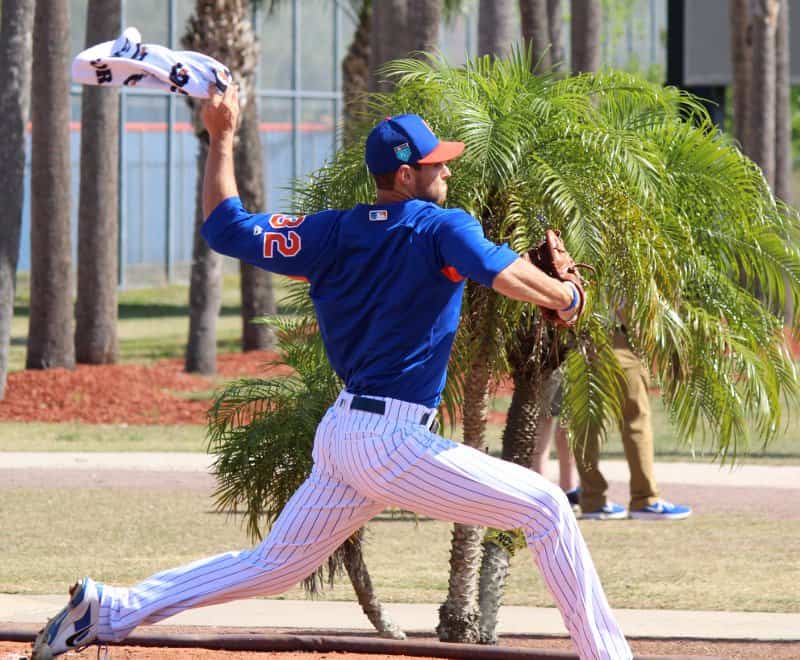 Like all aspects of sports, pitching a baseball requires proper technique, muscle memory, and the strengthening of necessary muscles. In football, linemen hit and push a sled; basketball players shoot hundreds of free throws daily, and pitchers wave around a kitchen towel in baseball.

While that does not sound very athletic, the towel drill for pitchers is a critical tool used by coaches to ensure pitchers have the right motion and throwing technique for the best possible velocity and ball control. So how can a $1 kitchen towel help someone become an MLB All-Star? It is not as hard as you think. Read on below to see how.

How the towel pitching drill is performed

The towel drill for pitchers has many variations, but we will start with the traditional setup. This drill was created to be a two-person exercise but can also be done alone.

First, the pitcher takes a regular pitching stance; it does not matter if it is a windup or a stretch motion. The second person will take a knee a few feet in front of the pitcher and place their glove hand outstretched towards the pitcher, but just out of their reach.

Next, the pitcher grabs a small towel and holds it in the lower corner with the usual ball-gripping fingers (index, middle, and thumb). The key here is not to roll up the towel into the shape of a ball but to keep it loose and hang it from the throwing hand. The towel must be dangling from the throwing hand because it offers the same wind resistance as throwing a 5 oz. baseball.

To determine the proper distance for the drill, the pitcher runs through their pitching motion with the towel fully extended to see how far it can reach during the delivery. The second player will then place their glove right at the very edge where the towel can touch the second person’s glove if the pitcher is fully extended.

As young pitchers develop, they learn to lean less on their shoulders and arms and rely more on their back and leg muscles to develop pitching velocity. To help this stick in your memory, remember that full body motion and the correct release point in the pitching motion lead to a harder fastball and more controlled off-speed pitches.

Benefits of the towel pitching drill

First, the towel drill was invented to improve pitching mechanics. If a pitcher has bad mechanics when throwing, forget about losing the game; the pitcher runs the risk of severe arm and shoulder injuries if they do not throw correctly. With the towel drill, a pitcher can use their natural throwing motion to work on their mechanics without the added strain of throwing an actual ball. This means that pitchers can spend time perfecting their throwing motion and mechanics without damaging their bodies.

Having a second person watch you is also a significant benefit. While this drill can be done alone, having someone to help make sure your delivery is both consistent and mechanically correct is better. Having someone tell you if your stride is too long or too short or if your leg kicks need to generate a better release point can help you refine your game. If you cannot find anyone to help with this drill, record yourself on your cell phone for a motion analysis.

Above all else, the towel drill ensures proper follow-through in the pitching motion. The follow-through is where a pitcher generates the speed for their fastball. Also, by using a towel and not a ball, you can hear the towel whip through the air, which will give you immediate feedback on whether your follow-through was correct.

Besides power and velocity, towel drills also improve the release point for pitchers. As a pitcher goes through the towel drill, the whipping of the towel should happen at the same time a pitcher would typically release the ball. By doing this over and over, pitchers will develop muscle memory at the correct time and place to release the ball.

Variations of the towel pitching drill

While coaches and teams use the towel drill at all levels of baseball, many players can get in additional practice time by themselves. The towel drill is a great way to work on mechanics when you are alone.

The drill itself can be done on a flat surface or a pitching mound, but in either case, the pitcher needs to set up a stationary target in front of them and make sure that when they whip the towel during their motion, it hits the edge of the target.

When doing a towel drill alone, make sure that the end of the towel reaches around to hit your back between the shoulder blades at the end of the drill. This way, you can ensure you have made a complete follow-through.

If you do have a coach or someone to help you, since each pitching delivery is slightly different (fastball, slider, curveball), pitchers need to use all the arm angles they would use in a game and change distances for the target. The reason for that is that in the windup, pitchers can generate all the power and rotation their bodies will allow, but from the stretch, different mechanics are needed to achieve velocity. The towel drill teaches pitchers exactly how to do that, so they do not lose speed when they change to the stretch position.

Also, several manufacturers sell versions of a towel training device intended to feel more like throwing an actual baseball. While these are sold at most sporting goods locations, players should still have a second person or a target set up to make sure that they are using the proper motion.

No one can throw a major league fastball or breaking ball without proper mechanics. Pitching with bad form is like asking for an injury to happen.

In most sports, athletes must practice repetition to ensure muscle memory, but they cannot wear down their bodies trying to do it. That is the beauty of the towel drill: pitchers can execute hundreds or even thousands of repetitions before pitching in a game to ensure they have the proper form, but without the added strain on the arm and shoulder.

In the video below, you will see a pitcher for the San Francisco Giants practicing the towel drill before a regular season game to show how relevant the towel drill is at the professional level. Watch as he examines where his feet are and how he whips the towel around to ensure full follow-through.