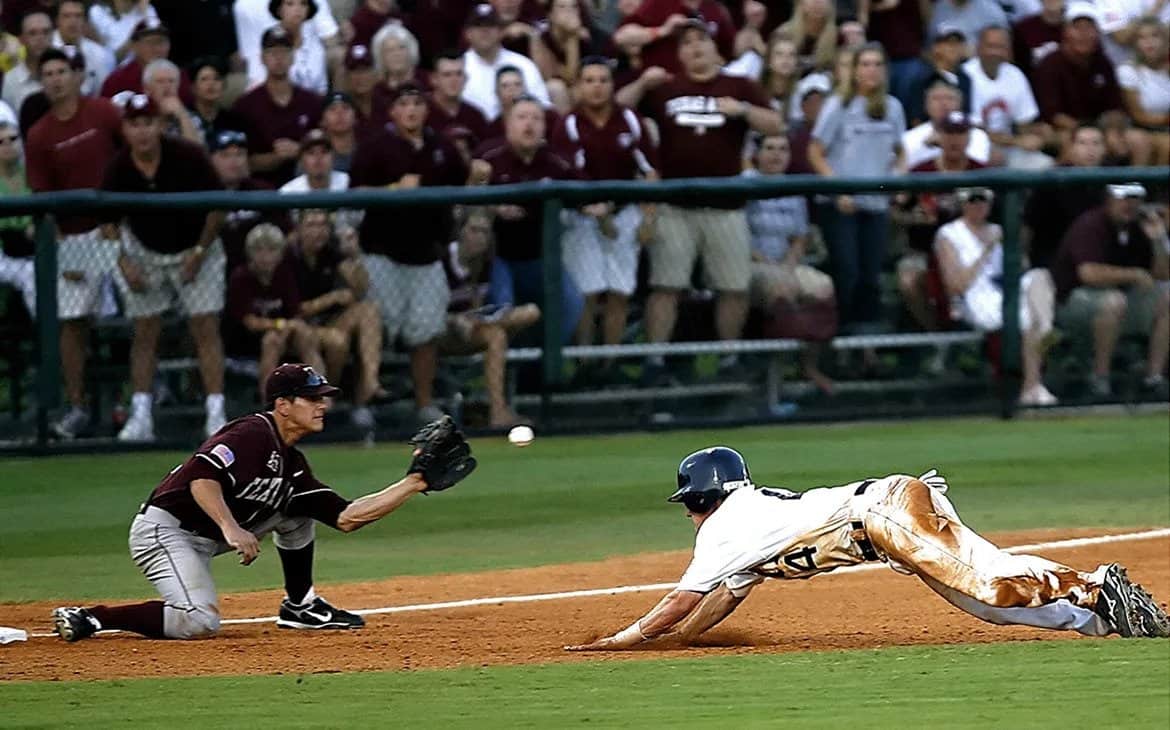 Knowing when to slide can determine if you are safe or out. The positioning of your slide also plays a massive role in the outcome of the play.

A simple rule of thumb is to slide into a base every time there is a close play. The only exception is at first base. Besides that, sliding is key since it helps you avoid any tags by the defense.

Sliding is not a simple thing, as it is a skill that takes practice and repetition. Through hard work, you can incorporate sliding into your skill set.

When to slide to avoid a tag

If you are batting and hit a ground ball in the infield, you should run full speed to the bag and through it. You should never slide into first base unless you are a base runner who is already at first base.

The fastest and most efficient way to beat out a throw at first base is to run through and past the bag. When you are a base runner, you should be prepared to slide on every play when needed.

A baserunner at first base should slide into second on any ground ball hit in the infield. Base runners must also slide at any base that an outfielder is throwing to. For example, a base runner is trying to advance to third base. The right fielder has the ball and will throw to third to get the runner out.

The runner must slide in order to avoid an easy tag for the third baseman. When you slide, you make it difficult for the fielder to tag you out in time. He must catch the ball and then drop his glove to find a body part to tag. Sliding can make a huge difference for your team. This is especially true for plays at home plate.

When to slide to break up a double play

A double play is when the defense gets two outs in one play. The majority of double plays in the MLB happen on ground balls. Most of the time, it will be a ground ball that gets a runner out at second as well as the batter at first. This is your typical double play.

It is the baserunner’s job to attempt to break up the double play at second. To break it up, he will slide in the direction of the base to try and alter the throw to first base. He may also disrupt the timing by sliding hard. Any time he can save the runner at first is crucial.

When to slide to avoid a collision

Baseball has the potential for dangerous moments that can lead to injury. Sliding was put in place to help protect the players from possible injuries.

One example is for plays at home plate. In every game, the catcher is equipped with heavy gear. His knee protection and face mask are usually metal and very hard. Can you imagine running into them at full speed?

Although sliding is recommended, players still run into the catcher fairly often. Usually, it results in injuries on both sides. By sliding, you are protecting yourself and the catcher. You can choose to slide either head-first or feet-first. It is usually based on your own personal preference. However, some situations might call for one over the other.

For a play at home plate, it may be best to slide head-first so you can use your hands to touch home plate. Plays at second base are usually feet-first slides. Players who don’t slide face the risk of concussions and many worse injuries. Some players have broken bones by failing to slide during a play. You always want to be safe and slide when necessary.

The type of slide you attempt is based on the situation you are in. Your role isn’t as important if you are sliding to break up a double play. However, you still want to do your job by attempting to mess up the fielder’s rhythm. Your goal should be to make the fielder uncomfortable.

When it comes to avoiding a tag, things get a lot more critical. Your job is to avoid getting out at all costs. Even if the throw beats you to the base, you can still be safe with an effective slide.

One who has mastered sliding can use his body and hands to fake out the runner and avoid the tag. For those less experienced, stay focused on sneaking your hand into the bag. Don’t make it obvious with which hand you will be lunging. If you are sliding head-first, your hands will decide the play. If you can fake out the runner, your chance of success goes through the roof. Strive to be quick and efficient.

Can you slide into first base?

Yes, you can slide into first base. However, it rarely happens. The only time you should be sliding into first is on a close play that is a foot race. For example, if you are racing the pitcher to the bag.

When should you slide head-first?

It would be best if you slide head-first when you are looking to avoid a tag. One situation that calls for a head-first slide is a steal.

Does sliding in baseball actually help?

Yes! Sliding can make a difference in being safe or out. Sliding puts your body in a tougher situation to make a tag in time for the fielder. A player who doesn’t slide makes it easy for the fielder to get him out.

Are you supposed to slide into second base?

Yes, you should always slide into second base unless it is unnecessary. The only time you wouldn’t really need to slide is if the play isn’t close. If you are out before you are halfway to the base, there is no reason to slide.

Sliding has many benefits that a player should always want to take advantage of. Most importantly, it can save them from injuries that keep them out for an extended period of time.

Another benefit is being able to avoid a tag. A good slider can avoid any tag. Coaches love this about a player, which will earn them more playing time in the long run.

Sliding should be part of your skill set as a baseball player. If it isn’t, practice your sliding until you feel comfortable. It will surely pay off.