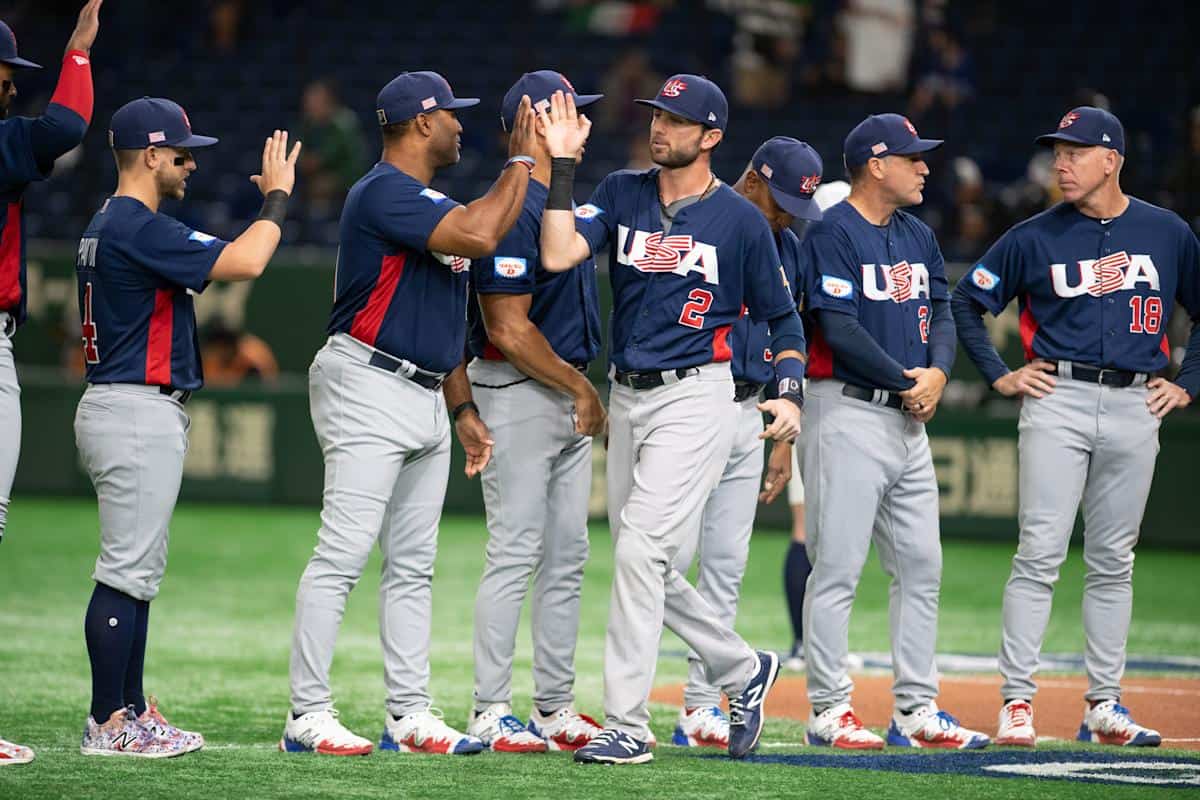 Children of all ages dream of Olympic greatness. They imagine standing on the gold medal podium and hearing their national anthem in the background. But what if your day job did not allow you to chase your gold medal dreams?

For baseball players that have made it to the professional level, their Olympic chances have already come and gone… almost. With all the hype and excitement that NBA and NHL players bring to the Olympics, MLB does not follow suit. So, why would one major American sport choose not to send professionals when the others do? Read on below, and we will explain it to you.

As you read, imagine watching a US Olympic lineup of Tim Anderson, Mike Trout, Bryce Harper, and Aaron Judge with Jacob DeGrom on the hill. (We want it to happen too.)

History of MLB players in the Olympics

Baseball and the Olympics have what many would call a Hollywood on-again, off-again relationship. Baseball first debuted in the 1904 Olympics (hosted in St. Louis, MO) as a “demonstration sport.” This name is given to sports that are not officially designated for the Games but are something the Olympic Committee wants to display to fans to generate interest.

From then on, baseball was in and out of the Olympics, but only as a demonstration sport or an exhibition for fans. Finally, in 1992, baseball was added as an official sport (hosted in Barcelona, Spain), but MLB players were not allowed. In 2000, the Olympic Committee allowed professional baseball players to compete, but MLB still refused to release its players from 2000-2008, so nothing changed.

Reasons for MLB players not participating in the Olympics

There are several reasons MLB players do not participate in the Olympics, but there are three main concerns that have been debated for decades.

Every four years, the Olympics run from July to August. The problem this creates for MLB is that the end of July and early August signifies the beginning of the second half of the season, and more importantly, the MLB trade deadline for moving players is almost always in the first week of August. Having the best players in baseball away for weeks is not something MLB owners and leadership want at such a critical time.

Olympic baseball is no more dangerous than any other baseball game, but if you owned an MLB franchise and your best player, who makes $40 million a season, got injured in an Olympic game, then what? The Olympics have no impact on the MLB season, so sending all-star players to the summer games is not a risk that owners are willing to take.

Impact of MLB players not participating in the Olympics

The Olympic Committee (OC) watches closely to make sure all sports have a fair, competitive landscape and that fans are attending live or tuning in to watch. When this does not happen, the OC will remove a sport for lack of interest or competitiveness. This is the rock and hard place where baseball finds itself.

Olympic basketball draws massive TV ratings, and perhaps baseball could too. Still, with a lack of exposure for international players and no superstars to watch, the lack of professional baseball players in the Olympics has led to decreased participation and viewership. Because of this, the OC removed baseball from the upcoming 2024 Games in Paris. However, most are hopeful that because of the popularity of baseball in the US, it will return as an Olympic sport in 2028, when Los Angeles is the host city. We never want to miss moments like this:

Possible solutions for MLB players to participate in the Olympics

People often wonder why NBA stars play in the Olympics and MLB stars do not. First, the schedule conflict is the main issue. The NBA finals are concluded by July, whereas baseball is in the middle of the season. But there might be something more.

If you don’t know what caused USA Basketball to allow NBA players in 1992, then look at the semi-final game in the 1988 Seoul Olympics. Before then, the US-dominated everyone, but the US lost that game to the Soviet Union and had to settle for the bronze medal. The following Olympics in ‘92, we sent Michael, Magic, and Larry to change that.

US baseball teams have been upset before in the Olympics (the US did not even qualify for the 2004 Olympics), but USA Baseball did not respond like USA Basketball. Perhaps this is why the NBA has an open-dialogue relationship with the Olympic Committee that MLB does not have. Many times, arbitrators are brought in for situations like this, so whether the answer is schedule adjustments, insurance policies for non-MLB injuries, or better collaboration, the answer could still be out there.

Is there anyone who advocates for MLB players to participate in the Olympics?

Absolutely. Many MLB superstars would like the chance to play in the Olympics, just like their counterparts in Japan and other countries, which temporarily suspend their league plays every four years for this event.

In fact, 2021 NL MVP Bryce Harper was quoted as saying, “You want to grow the game as much as possible, and you are not going to let us play in the Olympics because you don’t want to lose out on money for a 2-week period? OK, that’s dumb.” We could not agree more.

Is baseball being removed from the Olympics?

How do they choose the Olympic baseball team?

To determine who is on the team, USA Baseball (the governing body for US Olympic Baseball) will name a head coach and then work with that person to invite players to try out for the team. Like most other sports training camps, players will compete for each position. Prior to the Olympics, USA Baseball and the team manager (currently Mike Scioscia, who managed the Angels to a championship in 2002) will announce the full roster.

So, while the desire is there for the players and fans, the powers in MLB have yet to collaborate with the Olympic committee to allow for the sport’s greatest stars to play on a global stage. Some blame it on scheduling, money, special interests, or other entities, but other professional sports have found a way. For any sport to grow, it needs viewers, and one of the biggest sports stages is the Summer Olympics.

As fans, we will not get our dreams answered in 2024, but in 5 years, you could very well see a gold medal baseball game being played in Dodger Stadium. Just watch this scene from Dodger Stadium during the 1984 Games to see exactly what we are missing. (Dodger fans, this was before Will Clark was with the Giants and was just a kid from Louisiana, it’s okay to cheer)