Skip to content
Babe Ruth's quotes about success, life, and happiness are timeless 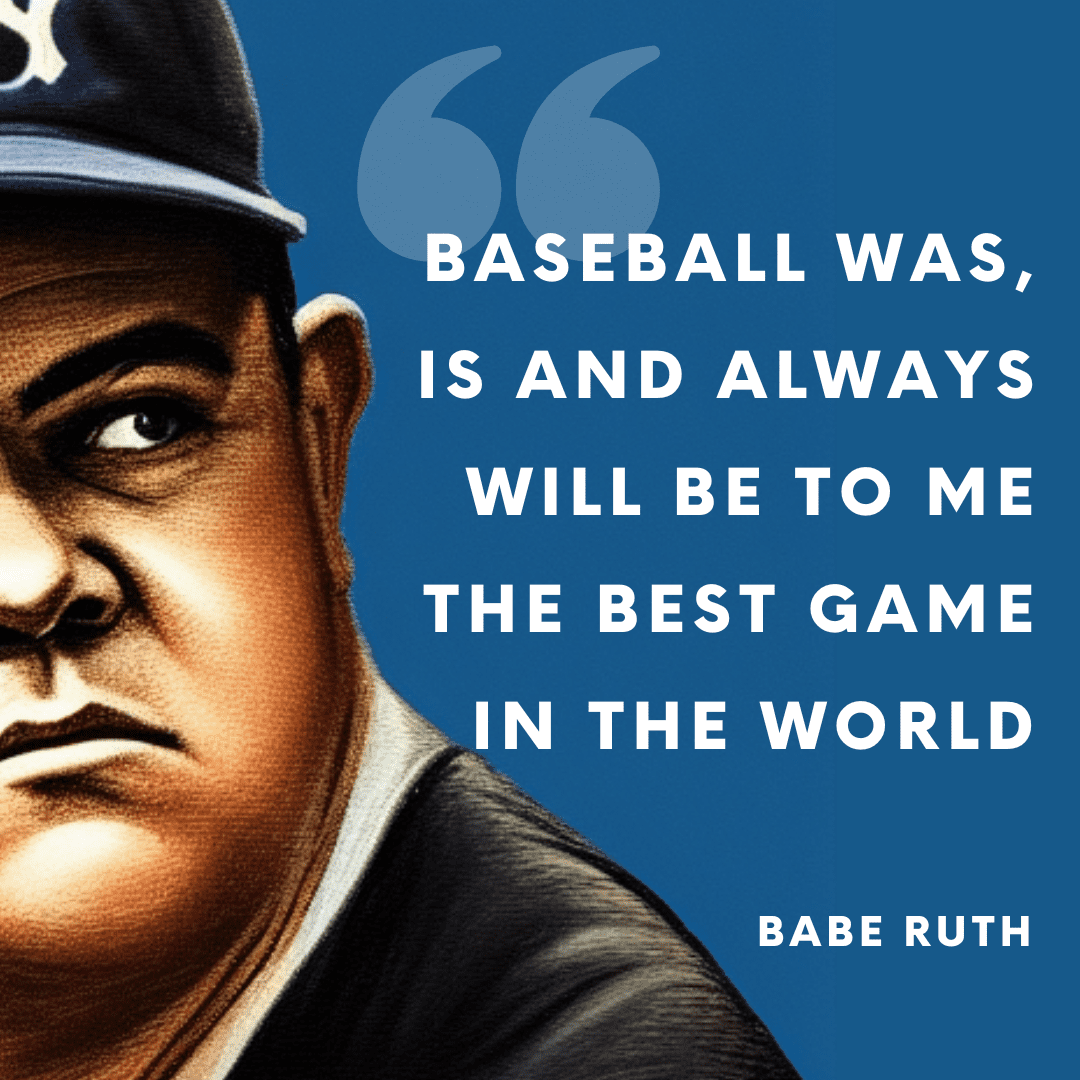 There’s no doubt that Babe Ruth was one of the greatest baseball players to ever set foot on the diamond. But his talents didn’t end there. Ruth was also an incredible wordsmith, and his quotes are as insightful today as they were when he first said them. Here are some of our favorite Babe Ruth quotes about life, success, and happiness. Enjoy!

Did you know that Babe Ruth had quite the sense of humor? Check out some of his funniest quotes below! You may be surprised at how witty and clever he was.

“All ballplayers should quit when it starts to feel as if all the baselines run uphill.”

“I have just one superstition. Whenever I hit a home run, I make certain I touch all four bases.”

“If I’d tried for them dinky singles I could’ve batted around six hundred.”

“I’ve never heard a crowd boo a homer, but I’ve heard plenty of boos after a strikeout.”

“All I can tell them is pick a good one and sock it. I get back to the dugout and they ask me what it was I hit and I tell them I don’t know except it looked good.”

“I won’t be happy until we have every boy in America between the ages of six and sixteen wearing a glove and swinging a bat.”

“Reading isn’t good for a ballplayer. Not good for his eyes. If my eyes went bad even a little bit I couldn’t hit home runs. So I gave up reading.”

Babe Ruth was a legendary figure not just because of his prowess as a ballplayer, but also because of his larger-than-life personality. Over the years, Ruth has said some truly insightful things. Here are some of our favorites.

“The way a team plays as a whole determines its success. You may have the greatest bunch of individual stars in the world, but if they don’t play together, the club won’t be worth a dime.”

“Baseball changes through the years. It gets milder.”

“I said I’m going to hit the next one right over the flagpole. God must have been with me.”

“The only real game, I think, in the world is baseball.”

“How to hit home runs: I swing as hard as I can, and I try to swing right through the ball… The harder you grip the bat, the more you can swing it through the ball, and the farther the ball will go. I swing big, with everything I’ve got. I hit big or I miss big. I like to live as big as I can.”

“You know this baseball game of ours comes up from the youth – that means the boys. And after you’ve been a boy, and grow up to know how to play ball, then you come to the boys you see representing themselves today in our national pastime.”

Babe Ruth was also a hugely motivational figure. Check out these powerful quotes from The Great Bambino himself to get inspired for your next goal.

“Baseball is the greatest game in the world and deserves the best you can give it.”

“It’s hard to beat a person who never gives up.”

“Never let the fear of striking out get in your way.”

“Never let the fear of striking out keep you from coming up to bat.”

“I’d give a year of my life if I could hit a homerun on opening day of this great new park.”

“Every strike brings me closer to the next home run.”

“As soon as I got out there I felt a strange relationship with the pitcher’s mound. It was as if I’d been born out there. Pitching just felt like the most natural thing in the world. Striking out batters was easy.”

For all Babe’s great quotes, this one has to be the most famous.

“Baseball was, is and always will be to me the best game in the world.”

Whether you’re a fan of baseball or not, there’s no denying that Babe Ruth was one of the most influential and important athletes of all time. He changed the game of baseball forever and his legacy continues on to this day. If you’re ever feeling down or like you can’t achieve something, remember one of Babe Ruth’s famous quotes and let it inspire you to keep going!

Babe Ruth is one of the most quoted athletes in history. He was a larger than life figure, both on and off the field. His quotes about baseball are often humorous and insightful. What’s your favorite quote? Let us know in the comments below!