Skip to content
There are many reasons why a batter might draw a line in the box, but there's one you want to avoid at all costs. 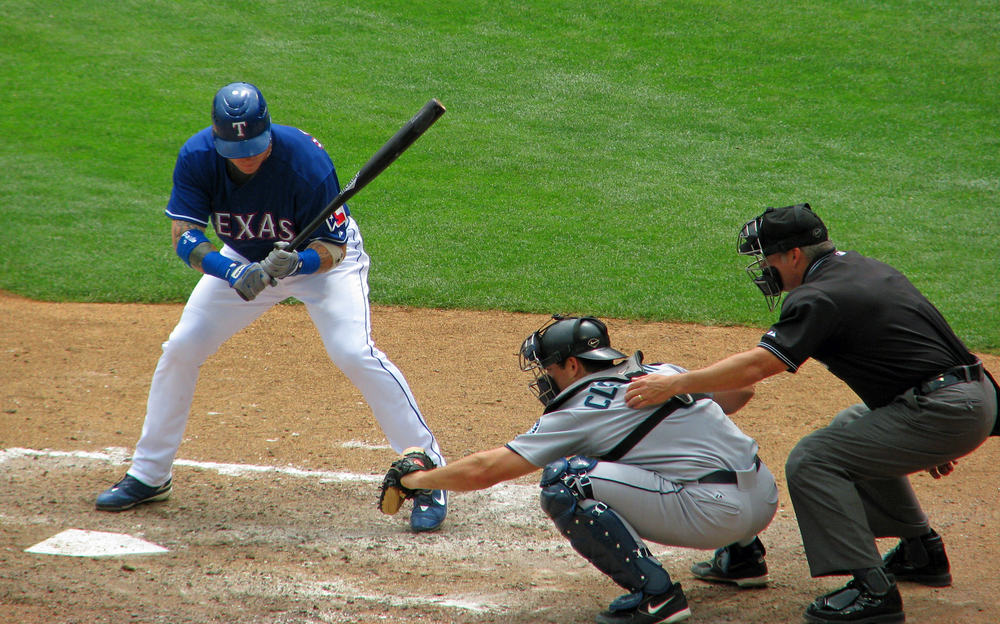 How Does Drawing a Line Show Up Umpires?

One of the draws of baseball is the human element. Umpires make calls. Most of the time they are correct. Sometimes they are wrong. There are many times when you may disagree with an umpire’s call. One of the biggest rules in baseball is that players and coaches are not allowed to argue strikes and balls. When an umpire makes a call that goes against you, you are supposed to accept it and move on. Umpires usually have a low threshold for accepting arguing.

One of the biggest situations where this happens is the called third strike. Also known as being “rung up”, if a batter watches a third strike, it is expected that they turn and walk to the dugout. However, some batters find it difficult to accept a called third strike. You may see some batters yell in disagreement, pound their bat in disgust, or silently draw a line in the dirt. The line the batter draws is the location outside of the strike zone where they believe the pitch crossed. If an umpire sees this act, they may choose to eject the batter from the game for arguing balls and strikes.

You won’t find a rule in the rulebook that bans the drawing of lines in the dirt. Instead, you will find that this is left to the judgment of the umpire. Not every batter who has drawn a line in the dirt has been ejected. This reinforces the idea that it is up to the discretion of the umpire.

What Makes An Umpire Decide to Eject a Batter?

Again, one of the biggest draws of baseball is the human element. Because of the human element, and the idea of ejections being left up to the discretion of the umpire – ejection can be a truly gray area. Some umpires may be a bit more lenient than others. You may notice that some umpires may be confident in their strike zone and less affected by outbursts from batters.

There also may be the possibility that the batter and the home plate umpire have history. During a series, umpires will rotate between the positions on the field and home plate. Sometimes you will notice that a player will be upset about a call in a previous game, or even series, and will use the called third strike as an opportunity to take out their frustration with the umpire. Umpires are human, and if there was a previous outburst, it is possible that they may be less lenient with the player.

What Can You Do Instead?

If you are a player, the first question that you need to answer is why you are reacting. If it is out of frustration, then the best thing for you to do is simply walk away. It is not worth risking ejection and possibly hurting your team over a called third strike. If the reason is that you don’t understand the strike zone, then you have other options. If you ask the umpire, “Hey Blue. Where was that?” It can still seem a bit antagonistic. If instead you simply ask “Did that hit the corner?” then you may have a better chance of getting a response from the umpire. What can be frustrating is when an umpire has an inconsistent strike zone. The player needs to find respectful ways to interact with the umpire.

What if the Umpire Misses A Call?

It happens. Umpires are human and they miss calls. Maybe one of the best examples of this was in 2010 when Armando Galarraga threw what would have been a perfect game. The first base umpire missed a call that cost Galarraga history. The beauty of it is that Jim Joyce, the umpire who missed the call, admitted his mistake after reviewing the play after the game. Unfortunately for Galarraga, it did not change the outcome of the game. However, you will notice that there was a lesson to be learned in it. Galarraga’s humility was respected and appreciated by umpires, players, and fans. There are some calls that you will never change. If the umpire misses a call, let the coach deal with it. The human element is one of the things that makes umpiring special. Also, considering that most umpires are making a call in a fraction of a second – it is expected that they are going to miss some calls.

There are several reasons why you should walk away rather than draw a line in the sand. When there is a lack of respect for the umpires, the game can break down pretty quickly. It is no longer about the play on the field, but instead about antagonizing the umpires. It is also important to note that except for plays that can be reviewed – very few if any, plays are overturned because someone argued against a call. Here’s another idea to consider, if you draw that line and get tossed – then what? Your manager now has to replace you in the lineup. The player who got ejected was in the lineup for a reason. When you get ejected, it only hurts your team. You could be right about a call, but you’ll be sitting in the clubhouse while your team plays without you. It is rarely worth it. Yes, arguments with umpires may be entertaining for fans, but it doesn’t truly help the team.