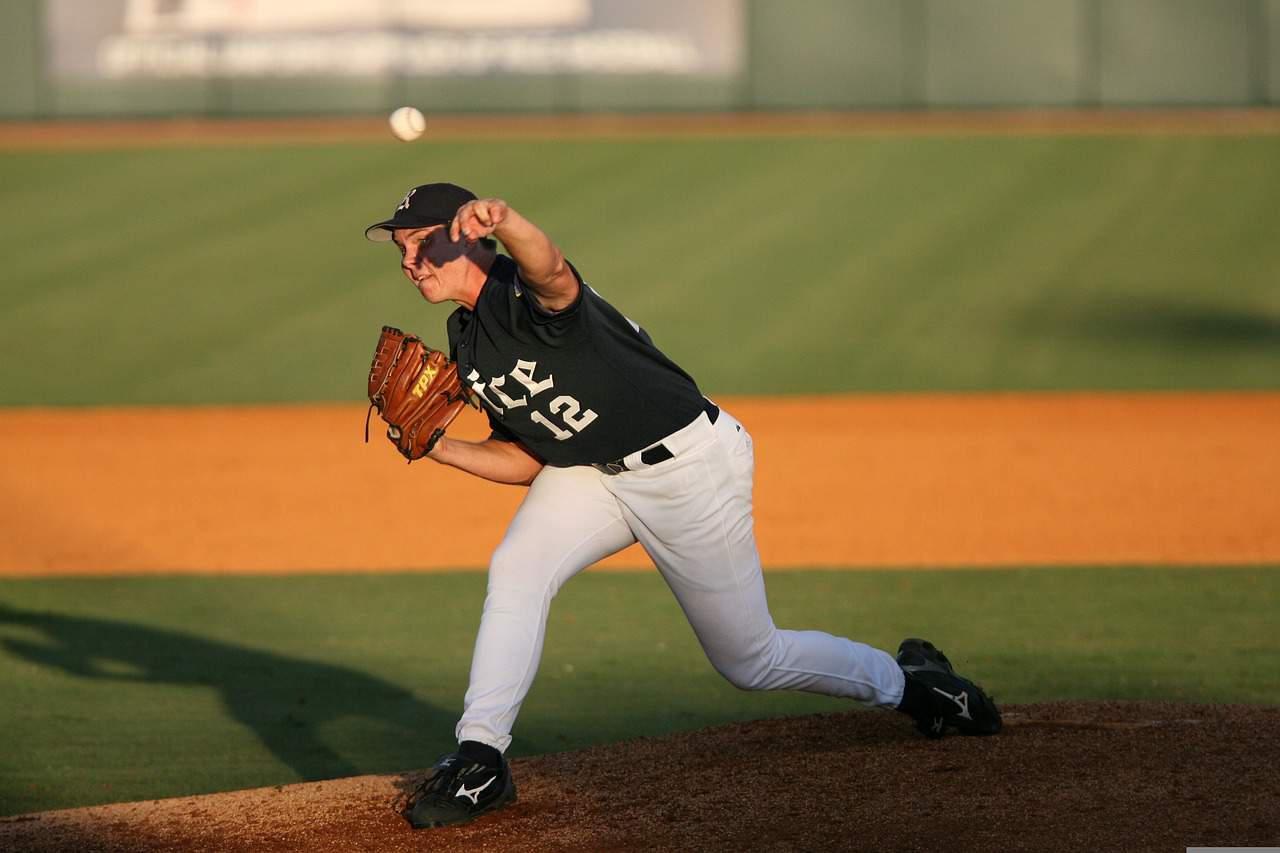 What do you think of when you hear the word “curveball?” Chances are, you think of a pitcher throwing a wicked curveball that makes the batter look foolish. Curveballs are one of the most exciting pitches to watch in baseball. If you’re interested in learning how to throw a curveball, this blog post is for you!

A curveball is a type of pitch that pitchers use to fool hitters and disrupt their timing. It is also referred to as a “breaking ball” or simply a “curve.” This is because of how the ball changes direction and angle from the time it leaves the pitcher’s hand until it reaches home plate.

The curveball has been a part of baseball for over 150 years and has many different variations and styles, but baseball fans know how effective of a pitch it is when thrown correctly.

What is a curveball?

A curveball is a pitch that is purposely thrown with lower speed and higher spin to force the baseball to change directions approximately 1-2 feet before it reaches home plate. Pitchers cannot deceive hitters by throwing the ball straight every single time. Major League hitters are too talented.

To be competitive with hitters, pitchers must use different grips, arm motions, and spin rotation to make the ball curve downwards, left, right, or sometimes both.

Why is it called a curveball?

The name “curveball” comes from the path the ball takes from when it leaves the pitcher’s hand to when it reaches home plate. When the pitcher releases the ball, the ball begins its path in a straight line.

Once the ball is 1-2 feet from home plate, the extreme amount of spin on the ball forces it to curve and change directions. Often, the ball breaks or “curves” down to the left or right, depending on which hand the pitcher throws with.

The actual name “curveball” was first published in the 1869 edition of the New York Clipper. The writer was referring to major league pitcher Phonney Martin, describing him as an “extremely hard pitcher to hit for the ball never comes in a straight line, but in a tantalizing curve.”

Throwing a curveball: The 4 steps

There are many ways to grip a curveball. The curving motion that the ball makes depends more on the release of the ball than the grip itself. To generate the spin needed, pitchers are taught to have their thumb directly on the ball’s seam and the middle finger clinching the ball around its center. Both the thumb and middle fingertip should have good pressure on the seams of the ball to ensure the maximum possible spin. The first finger, or pointer finger, touches the smooth part of the baseball and is next to the middle finger.

The pitcher’s arm angle determines how much the ball will curve or break, either downwards or side to side. The higher the release point of the curveball, the more it will break downwards in a 12-6 motion. The lower the ball is released, the more the ball will spin side to side in a sweeping motion. For young players, most are taught to lower their arm angle slightly lower than where they release a fastball. However, pitchers specializing in throwing curveballs have been known to throw them at many different angles.

For a pitcher, no pitch spins more than a curveball. The faster the ball spins, the more dramatic the pitch movement will be. There is a simple scientific reason why a spinning baseball will change directions. A baseball spins at a high rate, creating a high-pressure zone of air directly over the ball, pushing it downwards.

The release of the curveball is the most important part of the pitch. The pitcher’s hand can release the ball from the sidearm to the top of the head at any angle. However, what makes it different is that once the ball is released, the pitcher must use their forearm muscles to flick their wrist down as they let go. Lastly, the pitcher must have their throwing arm follow through across their body to ensure maximum spin.

Below, you will see a video of Clayton Kershaw of the Los Angeles Dodgers explaining his curveball and see how he throws it. Kershaw is widely agreed to be among the best curveball pitchers of the last 20 years.

When to throw a curveball

A curveball can be thrown at any time, but historically, most pitchers throw it when they are ahead in the count. Being ahead in the count means that the hitter currently has more strikes than balls in the at-bat.

However, those pitchers who have a mastery of the curveball will throw it any time they think a hitter is expecting a fastball. Some will use it for the first pitch of an at-bat to surprise the hitter immediately.

How does a curveball move?

A curveball will move top-down, at a diagonal angle, or from side to side. How much the ball moves depends on a few factors: spin of the ball, velocity, release point, and the snap of the wrist. As the ball spins, the seams disrupt the air directly above the ball, causing a slight increase in air pressure right above the ball. As the air pressure above the ball pushes it downwards, you get the desired curve or break, that you are looking for.

Why is a curveball hard to hit?

On average, a major league pitch takes 0.4 seconds to leave a pitcher’s hand and reach home plate. This means that hitters only have approximately 0.25 seconds to decide whether they will swing the bat.

Because the hitters must decide to swing before the ball has curved, it makes the likelihood of making solid contact with the bat less likely.

Major league hitters are watching the pitcher constantly. To make the curveball even more successful, the hitter should not see it coming.

To ensure they don’t, the pitcher should grip the ball while it is hidden in their glove and keep it there until they wind up. Keeping the ball grip hidden prevents the hitter from seeing where the fingers are placed on the ball and identifying the pitch.

Below, watch some of the greatest curveballs in MLB history, and pay close attention to the frustration and confusion on the hitters’ faces as they realize they have been fooled. That is the power of the curveball.

Who invented the curveball?

Most baseball historians agree that William “Candy” Cummings was the person who invented the curveball. Cummings played in the major leagues from 1872-1877 and was elected to the MLB Hall of Fame in 1939.

Urban legend claims that Cummings taught himself how to throw a curveball by throwing seashells and seeing how they curved in the air before they hit the water. He then figured out how to do the same with a baseball.

Who had the most famous curveball?

Sandy Koufax of the Los Angeles Dodgers is widely considered to have the most effective curveball in MLB history. Koufax played for the Dodgers from 1955-1966 and was elected to the Hall of Fame in 1972. Many people credit the extreme movement of his curveball to two things: First, his delivery was almost a 12-6 motion, which allows for a possible downward movement. Second, Koufax was known to have longer than average fingers. This fact allowed him to have a stronger and more complete grip on the baseball and put more spin on the ball than anyone else up until then.

Chicago Cubs Hall of Famer Ernie Banks was quoted as saying, “He’s the greatest pitcher I ever saw. I can still see that big curveball. It had great arc…. more spin than anybody else’s.”

Is a curveball a dangerous pitch to throw?

According to the US National Library of Medicine, a 2015 study showed no greater risk of injury from throwing a curveball than any other pitch. However, this is only true if all pitches are thrown correctly with the proper form.

It is widely agreed upon that if pitchers throw curveballs with bad mechanics, the risk of an elbow, wrist, or shoulder injury is much higher. The reason why is that the twisting motion in the forearm can cause damage to the elbow and wrist joints when not done correctly.

How else is the word curveball used in pop culture?

According to the North American Oxford Dictionary, the word “curveball” is used in the informal English language today as a word for something unexpected, surprising, or disruptive.

What is the difference between a curveball and a slider?

The main difference between a curveball and a slider is the flick, the twisting of the wrist, and the ball’s release point. A slider is thrown with the mechanics of a fastball but with the grip of a curveball.

A curveball has the exact grip, but the pitcher must change the release point because the arm must be free to twist and snap the ball downwards with spin.

The curveball: A deceptive and celebrated pitch

In the 19th century, professional baseball players and the media believed that the curveball was deceptive and dishonest. Some even argued that it was cheating, but there were no rules to prevent a pitcher from throwing it. Once pitchers knew the pitch was here to stay, it became the #2 most popular pitch behind the fastball.

Fast forward to the 21st century, and now a good curveball pitcher is celebrated with video highlight reels and fans’ applause, especially if they can make a hitter look foolish in the process. Now that you know how to throw a curveball, go out and give it a try!