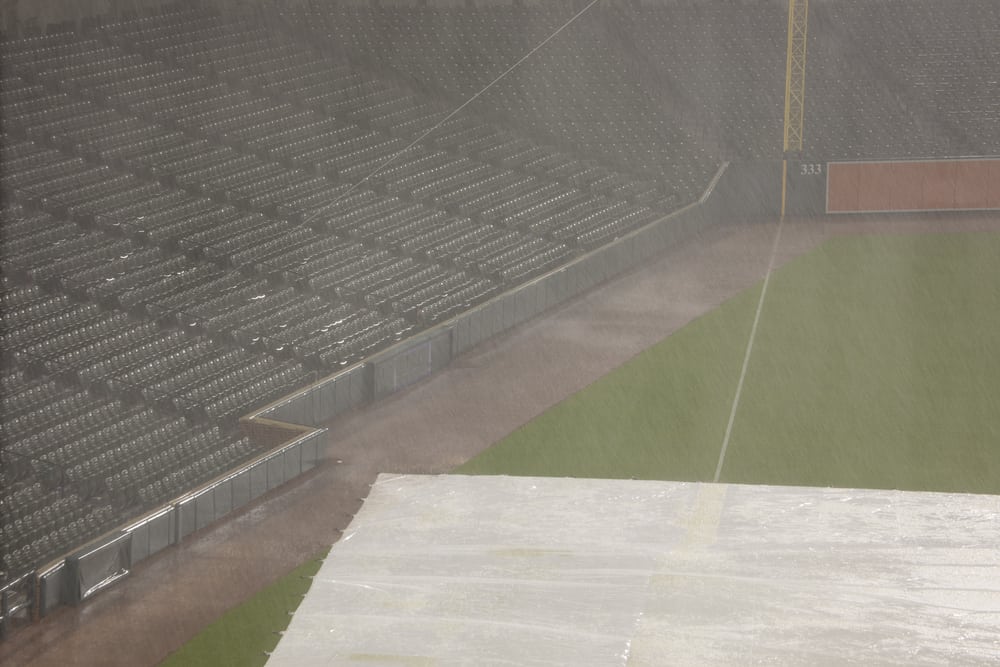 The old motto of the US Postal Service said that they worked no matter what, in “snow, rain, heat, or gloom of night.” MLB does not share the same passion for the weather. Baseball is that one sport where rain can make the game significantly more dangerous for players. It might make one think that more teams would have a roof over their stadium, but that is not the case.

Currently, only eight of the 32 teams have a roof over their stadium. Why wouldn’t more teams do this? The simple answer is tradition and money, but the truth is that baseball is not like other sports. A slippery wet football is much less likely to injure a player than a soaking wet baseball. In fact, wet baseballs can put someone in the hospital or worse.

Below, we explain why playing baseball in the rain might seem fun but is a safety concern for every single person in the stadium.

The challenges of playing baseball in the rain

Several challenges come with playing baseball in the rain. Below are some of the main ones:

1. The grip on the baseball

When leather gets wet, it releases its natural oils onto the surface. That is true for jackets, gloves, and especially baseballs. Suppose a pitcher cannot grip a baseball, the risk of the ball slipping out of their hand increases. If you want to understand the dangers of pitching a wet baseball, look no further than the death of Ray Chapman in 1920, which ended the dead-ball era of baseball.

Playing in the rain is common in the NFL or professional soccer because they play entirely on grass (natural or synthetic). Baseball has infield dirt—a lot of it. As rain collects on the infield dirt, the dirt shifts and creates bumps, small indents, and many other uneven surfaces for the infielders, pitchers, and hitters to deal with. This is why the large tarps come out in the rain.

Hitters can use pine tar on the first 18 inches of their bat, but in heavy rain, leather batting gloves will have problems gripping a bat—even with pine tar on it. Not only that, seeing the ball (which is a serious safety issue) is more difficult for the hitter, catcher, and all fielders. To see an example of what we mean when we say rain is dangerous for baseball, watch this clip:

The potential risks of playing baseball in the rain

Aside from the known injury risks that come from playing with a slippery baseball or a rain-soaked infield, there are other serious risks that come with playing a ballgame in the rain:

According to the CDC, an average of 28 people in the US die each year from lightning strikes. While this has never happened at an MLB game, the risk remains. Watch this clip from a regular season game in Arlington, TX, between the Twins and Rangers. Hear the crack and watch them run:

When baseball equipment is slippery, everyone is at risk, even if you paid a couple of hundred bucks to sit near the field. Watch this clip from a wet, regular-season game in Atlanta between the Braves and Mets. This poor Braves fan with a great seat took a bat to the head:

If you live in a part of the country that does not get hail, lucky you! Denver is not one of those places. Just like rain can delay a baseball game and make it unsafe, ice falling from the sky is no different. Watch this brief game clip between the Blue Jays and the Rockies. When the home plate umpire laughs and makes snowballs, it is a sad day in baseball:

Several economic factors come with rain delays and rainouts. No one is immune from frustration. For fans, losing time sitting and waiting for a game to resume can be costly, and if the game is canceled altogether, then some expenses cannot be recouped by fans (parking, etc.).

For television, radio, and online press and broadcasters, a lot of advertising revenue is on the line with each game. Organizations pay significant amounts of money to market their goods and services during a game, and if that does not happen, the sponsors and MLB must decide who takes the financial hit.

For the teams and stadiums, rain delays can also be extremely expensive. First, stadium employees who must stay longer than their scheduled shift are entitled to overtime pay, which comes directly from game revenue. Also, if the game must be made up in a doubleheader later, there will be additional labor and staffing costs that teams and stadiums must take on.

How much rain cancels a baseball game?

This is a subjective answer determined by the umpires and the manager of the home team. As a rule, if the rain is light or moderate with no lightning warnings, then a game will continue if the baseballs can be kept dry. Once a game is suspended for rain, umpires are required by rule to wait 75 minutes to see if conditions improve. If they do not, the home manager and umpires will decide if the game should be canceled or rescheduled.

Who reserves the right to call a game for rain?

The manager of the home team is in charge of deciding whether the game should be delayed or canceled due to rain or other weather. According to MLB rule 3.10, “the home team shall be the sole judge as to whether a game shall not be started because of unsuitable weather conditions…” This does not apply to the playoffs or World Series. In those situations, the league will make the decision.

Are there rain-shortened games in the playoffs or the world series?

There has not been a rain-shortened official World Series game. The closest it ever came to happening was in the 2008 Series between the Phillies and Rays. The Phillies led 2-1 after five innings, which made the game “official,” but play continued, and the Rays tied the game 2-2 in the 6th. After that inning, the rain worsened, and then-MLB Commissioner Bud Selig decided to postpone the game at its current stage. The game continued two days later, and the Phillies won 4-3.

For the playoffs, prior to 2009, all playoff games needed to go five full innings before they could be suspended. For example, in Game 1 of the 1982 NLCS, the Cardinals and Braves made it to the top of the 5th, but the rain stopped the game, so the whole thing was scratched and started over from the beginning the next day. It didn’t matter. The Cardinals swept the Braves and eventually beat the Brewers to win the World Series that year.

Do the same rainout rules apply to little league or high school baseball?

The rainout rules for amateur baseball are similar to MLB. The main difference is that in youth leagues, games do not go nine innings, so games are official after the fourth inning and can end after that.

For any other rain delay or rainout decision in youth baseball, those calls are made by the umpires and the coaches at the game.

While playing sports in the rain can be fun (like football, soccer, or rugby), baseball in the rain is not fun. With significant amounts of downtime during gameplay, players may literally stand in the rain for 10-15 minutes without moving if a ball is not hit to them. Not only that, but baseball is also the only team sport aside from softball played on dirt. When rain mixes with dirt, even baseball dirt, it forms holes, mounds, and clumps that can be slipped on, tripped over, or fallen over.

With some teams having payrolls of over $200 million per year, no team manager would be expected to keep their players playing in the rain with the risk of injury or much worse. We’ve discussed the safety issues for players and fans, but before you go, make no mistake, the grounds crew faces risks too. Just watch: