Skip to content
Determining what is a foul ball in baseball can be tricky, but with these tips you'll be able to make the right call every time. 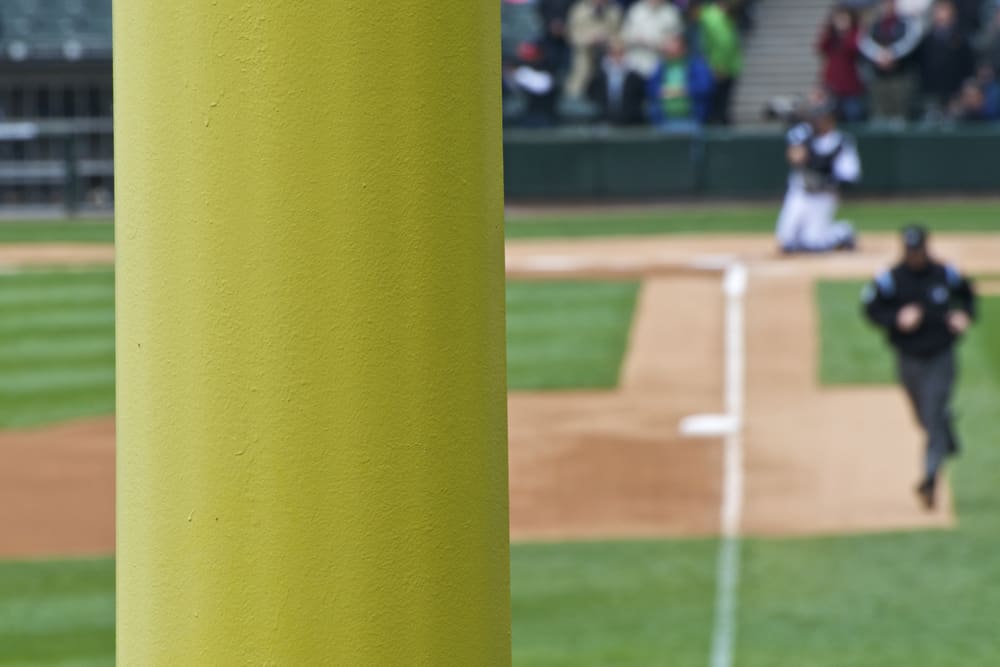 A foul ball can make or break a play, a game, or a season. Sometimes you will see a batter hit a screaming foul ball that lands 400 feet from home plate and then the next swing is the third strike. For the most part, foul balls are pretty easy to call or determine.

In most cases, they are judgment calls that the average fan can determine without consulting a rulebook. However, in some cases, the foul ball calls can leave fans scratching their heads. In every case, a foul ball is considered a dead ball.

What makes a ball fair or foul?

There are two types of territories in baseball – fair and foul. A ball can be considered foul through the following scenarios:

Why is it called a foul ball?

How many foul balls can you hit?

You can hit as many foul balls as you possibly can. There is no limit to the number. As long as the foul balls are not hit in the air and caught, you can continue to foul pitches off. There’s actually a benefit to the hitter here in that you can add to the pitch count of a pitcher. You can also force a pitcher to give you a better selection to hit if you can foul the pitches off that you do not like.

What’s the difference between a foul ball and a foul tip?

The difference between a foul tip and and foul ball is mainly location. A foul tip is a ball that is tipped and usually stopped by a catcher. If a fould tip is caught it can be considered a third strike. Sometimes foul tips go directly in the dirt. Sometimes foul tips find themselves in the glove of a catcher. A foul ball generally travels a little further away from home plate. A foul ball could be a liner, a dribbler, or a pop-up.

What happens if a player drops a foul ball?

This can happen frequently. Players drop foul balls from time to time. Depending on the situation There can be different consequences. The most common consequence is that the batter gets another opportunity at the plate. This new opportunity can be a positive or negative thing. Perhaps the batter simply strikes out or hits into a double play. However, the opposite could happen as well. It could turn out that the batter gets a hit and extends the inning, or hits an extra base hit, or hits a home run.

There could also be a strategic reason for a fielder to drop a foul ball. If there is a runner on third and a foul ball is hit deep enough, the fielder may choose to drop the ball to prevent the runner from tagging up. Since it is a foul ball that means that it is automatically ruled dead.

Can you steal on a foul ball?

A foul ball is automatically ruled a dead ball. Runners are not able to advance during a dead ball. Any runner that advances when a ball is hit foul is forced to return to their original base. It does not matter if the runner was in motion before the ball was judged foul or afterwards. A dead ball freezes all runners.

Where do foul balls usually go?

Foul balls go in many different directions. A great many of them are fouled back behind home plate. Some are sprayed along the seats behind first and third. Where the foul balls go depends on the make-up of the stadium and its dimensions and also the hitters and pitchers. There are a number of variables to determine where foul balls will go.

Can a foul ball become fair?

If a ball is ruled fair it is a fair ball. It cannot be both fair and foul. However, a ball can start off foul and then roll fair. The opposite may be true as well. Once a ball has been ruled foul the ball is considered dead. So in this sense, no a foul ball cannot become fair.

What happens if a ball hits the foul pole?

It is rare when it happens, but sometimes a fly ball hits a foul pole. When this happens, the hit is ruled a home run. It doesn’t matter where the ball hits on the pole – if it makes contact then it is a home run.

Is it a foul ball if it hits the line?

Is it a foul ball if it hits the plate?

If a batted ball hits the plate first, it is considered a foul ball. The umpire will rule the play dead.

Is it a foul ball if it hits first base?

The ball is considered a fair ball if it hits first or third base.

Is it a foul ball?

In conclusion, there are a number of different scenarios in which a foul ball can affect the outcome of a game. Some are easy to understand and some are a bit more complicated. If you are watching a casual fan, the easiest thing to do is to watch to see what the umpire calls. If you are coaching or playing, it is good to know what possible strategies come into play with foul balls.