Skip to content
Pine tar is a sticky substance that helps players keep a grip on their bats. 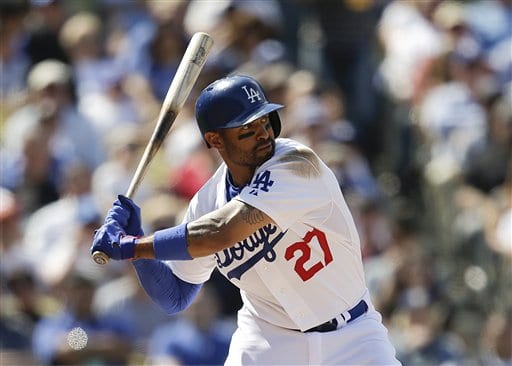 Pine tar is used to help baseball players keep hold of the grip of their wood bats. Using a sticky substance like pine tar is not different from why a batter would choose to wear batting gloves. Having a solid grip on a bat allows a player to control where the bat’s barrel is heading and allows a batter to swing through the hitting zone at high speed.

What does pine tar do in baseball?

Pine tar is an extremely tacky or sticky substance made from pine trees and is used to provide batters with a better grip on their bats. It is brownish-black in color and can often be seen on the grip of lighter-colored bats or players’ helmets. Pine tar comes in a liquid form that is first applied onto a rag and then rubbed onto a bat or helmet and it also comes in a stick that can be rubbed directly onto the grip of bats. Players can often be seen doing this in the on-deck circle or just before they step up to the plate to hit.

Is pine tar illegal in baseball?

Pine tar is legal in Major League Baseball, but there are restrictions on its use. Major league baseball players must follow the 18-inch rule, which means that pine tar can only be on the bat’s lowest 18 inches, or grip end. However, a batter violates MLB rules if their bat has pine tar closer to the barrel end of the bat, and any use of pine tar by a pitcher is also illegal.

Like those in Little League, Amateur players are not allowed to use pine tar at all, but the high school and college-level games do allow pine tar for batters in the same way that Major League Baseball does.

Why do baseball players put pine tar on their helmets?

Putting pine tar on a batter’s helmet doesn’t do much. It certainly does not offer any extra protection. Players often touch or adjust their helmets after touching a grip that has pine tar on it. This transfers the pine tar from their hands, or gloves, onto the helmet itself.

Some players do put pine tar on a helmet proactively to touch it during an at-bat and ensure that their hands are tacky as they like them to be when hitting. Pine tar on the helmet can also look cool to some players, and they might put it on the helmet for that reason only.

The Pine Tar Incident occurred on July 24th, 1983, in a game between the Kansas City Royals and the New York Yankees. The Royals star player, and now Hall-of-Famer, George Brett, hit a go-ahead home run in the ninth inning, but the home run was nullified due to the pine tar on Brett’s bat, and he was called out. This incident is infamous because of how infrequently the rule is enforced but also because of the way Brett sprinted out of the dugout manically after he was called out. If you haven’t seen the Pine Tar Incident clip, it is worth a few minutes of your time.

How to Use Pine Tar in Baseball

How to Use Pine Tar on a Bat

The first step for using pine tar on a bat is to clean the grip area of the bat to ensure you can put an even coat of pine tar in that 18-inch area near the handle of the bat. Using a stick of pine tar is almost like putting on stick deodorant – you simply expose the pine tar from the canister and then rub it up and down the bat’s grip until you have a nice even layer of pine tar. Using liquid pine tar is a little messier and involves a rag, but the rest of the process is mostly the same. Clean the bat, put some pine tar on the pine tar rag, then grip the bat’s handle end with a rag and use a twisting motion to apply the pine tar onto the grip.

How to Use Pine Tar on a helmet

Putting pine tar on a helmet is even easier than putting it on a bat because there is no restriction on how high or low the pine tar can be placed on the helmet. With this in mind, all you need to do is take the stick of pine tar or rag coated with pine tar and rub it on the front of the helmet where a logo usually appears and/or on the crown of the helmet. It’s best to apply the pine tar on these helmet areas because both have enough surface area for the batter to ensure she or she has properly coated their hands in the pine tar.

How do you get pine tar off a helmet?

The best way to get excess pine tar off a helmet is to apply rubbing or isopropyl alcohol to a rag and wipe with a bit of elbow grease until the pine tar is completely cleaned off of the helmet.

How do you get pine tar off a bat?

Like getting pine tar off of a helmet, the best way to get pine tar off of a bat is to use rubbing alcohol. A rag or an old t-shirt is the perfect tool, and after coating the rag in rubbing alcohol, wipe up and down the bat’s grip until the pine tar has been removed. Even the most gunked-up bats should be good as new after about ten or fifteen minutes of effort.