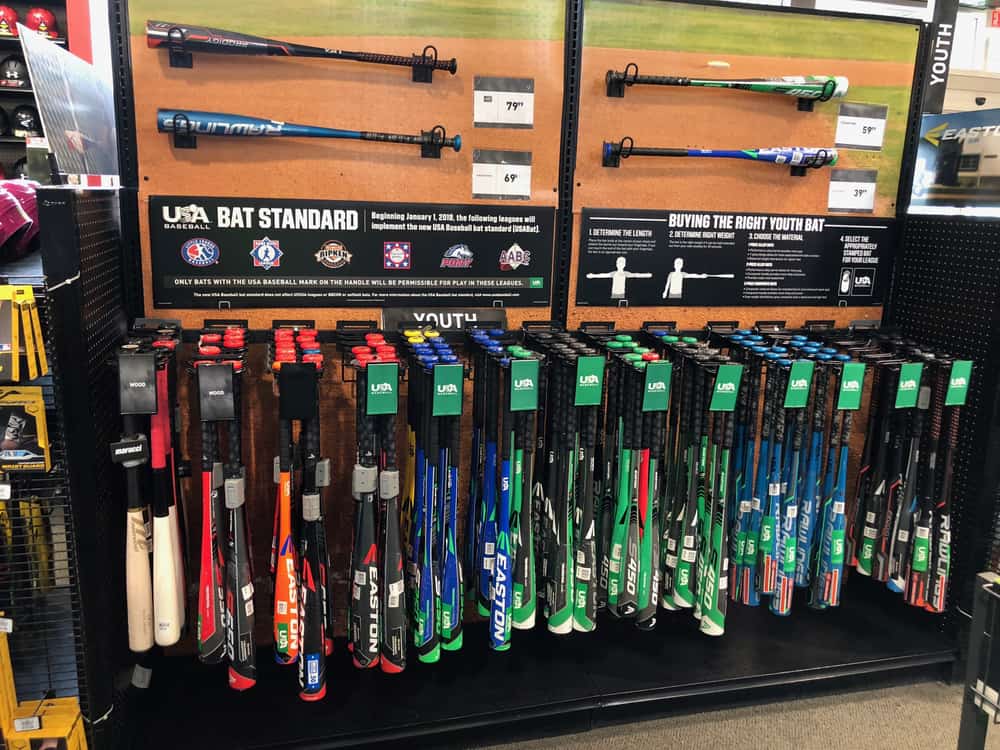 Always check with your league to see which rules are being used.

What does BBCOR mean on a bat?

BBCOR is an acronym that stands for Batted Ball Coefficient of Restitution and is a measure of the spring-like, or trampoline, effect of a bat. For example, 0.50 BBCOR means that if a pitch is thrown at 100 mph at a stationary bat, the ball at impact would rebound at 50 MPH or .50 of the thrown ball’s velocity. A BBCOR bat’s barrel also must be 2 ⅝ inches in diameter or less and cannot exceed a -3 length-to-weight ratio (aka drop 3). These bats are really for players who are looking to maximize the overall performance of their bats.

What does USA mean on a bat?

A USA bat is a bat that complies with USA Baseball’s bat standard, also known as the USABat standard. Unlike BBCOR bats, USA bats are lighter weight and geared toward players aged 8-14 that are still developing their batting skills. These athletes need a bat that is a bit easier to handle, and a USA bat typically fits that bill.

On the other hand, USA bats tend to lack the pop or ping of a BBCOR bat because they have a lighter swing weight. Again, USA Bats are meant more for younger athletes, but they are required to play in the leagues that created the USABat standard itself (Babe Ruth Baseball, Cal Ripken Baseball, PONY Baseball, and the American Amateur Baseball Congress).

You might be asking yourself, “how did these different types of bats even come to be anyhow?” USA Baseball’s bat standard was developed in conjunction with its participating member national member organizations (Babe Ruth Baseball, Cal Ripken Baseball, PONY Baseball, Little League Baseball, Dixie Youth Baseball, Dixie Boys Baseball, tee ball, and other youth leagues) and USA Baseball has required bats to undergo lab testing to ensure they perform at a wood-like level since its implementation in 2018.

BBCOR was developed by the National Collegiate Athletic Association (NCAA) and implemented for the 2011 season. The NCAA adopted this standard to make baseball more like a wooden game than it was with unregulated metal bats. The National

What is better, USA or BBCOR?

From a pure performance perspective, a BBCOR bat will almost always outperform a USABat. This is due to the fact that BBCOR bats have a higher weight than USA bats. Typically, top players would always be able to get better exit velocity from a heavier bat than a lighter one.

Are BBCOR bats legal for USA?

Are USA bats legal for BBCOR?

At the high school & collegiate level, all bats must be BBCOR certified. This means that some USA Bats would be illegal to play at those levels. Even if a USA Bat was legal for a BBCOR league, it would not be a good decision to use a USA Bat over the BBCOR one due to the significant performance differences.

BBCOR bats can be used in Little League Intermediate Baseball & Junior League Divisions, but the recommended drop for a 12-year-old is 8 versus the drop 3 that is required for a BBCOR bat certification.

What does BBCOR stand for?

BBCOR stands for “Batted Ball Coefficient of Restitution.” This is a measure of the spring-like or trampoline effect of a bat.

Is BBCOR only drop 3?

That is correct. To be BBCOR certified, it must be drop 3.

Do BBCOR bats have less pop?

BBCOR bats do not have less pop than USABats – in fact, BBCOR bats tend to have more pop because they are heavier than their USABat counterparts.

That’s all there is to know about BBCOR versus USA Bats. We hope you found this article helpful to all of your bat needs. Keep on swingin’!