Skip to content
Learn about the important role of an umpire in baseball and how they make sure the game is fair. 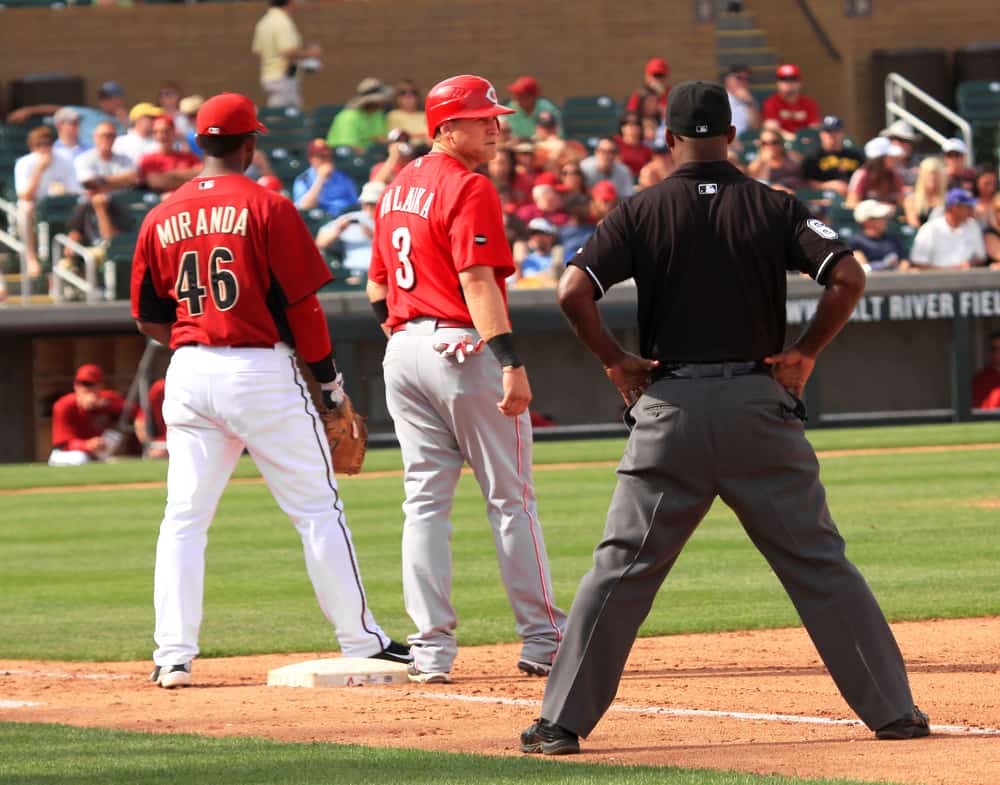 An umpire in baseball is the person who makes the calls on the field. They are responsible for ruling on plays, making sure the game is played fairly, and enforcing the rules of baseball. Umpires have a lot of responsibility, and their decisions can impact the outcome of a game. That’s why it’s important to know what an umpire is and what they do.

The umpire controls just about everything about the game. In basketball, you have referees. In baseball, you have umpires. These guys are masters of the rules and make a call on every single play in a baseball game.

With recent developments, the MLB is trying to move away from umpires and toward automated umpires. For now, we have real human umpires that call the game.

What is an umpire?

An umpire is the rules expert in a baseball game. There are usually four umpires in a typical MLB game. The umpire has to make a call for every play of the game. This can be untrue if you are talking about a field umpire.

However, the home-plate umpire makes a call on every single pitch. Without an umpire, there would be no baseball and just chaos. The umpire keeps the peace in a game.

Origin of the word “umpire”

The origin of the word umpire is found in the French meaning of an odd number. Back in the day, an odd number meant a third person to settle a dispute between two people. If you only have two people, they will have two different sides and never agree on one side. In baseball, the umpire is that third person. They remove all bias and make calls and decisions based solely on the rules.

In a baseball game, there are four different umpires. The main umpire is the home-plate umpire, positioned behind the catcher. He rules every pitch, whether a ball or a strike.

The home-plate umpire’s primary duty is to call balls and strikes. If a ball is thrown in the strike zone, the umpire will call it a strike. If it is not, he will call it a ball.

The umpires on the foul lines are assigned to rule whether balls are fair or foul. They also have a duty to rule whether a player took full swing. This is called a check swing and is decided by the first or third base umpire.

The second base umpire is usually focused on plays up the middle of the field and at second base.

The umpires are taught a variety of signals to make their calls. The home-plate umpire will point toward the dugout to call a strike. He doesn’t make a motion to call a ball but will say “ball.”

For a foul ball, the umpire will wave his hands over his head and yell out “foul ball.” For a fair ball, he will point toward the playing area to show the ball is fair.

An umpire will also signify a dead ball by waving his hands over his head.

What happens if you argue with an umpire?

You are risking being ejected from the game by arguing with an umpire. A coach has some room to discuss, but once he gets vulgar or aggressive, he will be expelled by the umpire. You must leave the field when you are ejected and can no longer be there. A suspension is also possible, depending on the intensity of the argument. It is not the smartest thing to argue with an umpire.

How does technology help or hurt an umpire?

Technology has become a huge part of baseball. Recently, efforts have been made to eliminate umpires and use an automated system. This could pay off since umpires are making more and more mistakes in today’s game. Human error will always be a thing and is impossible to get rid of. Technology has been implemented to review plays and correct bad calls. However, not every play is eligible to be reviewed.

What does the future hold for umpires?

We could be witnessing the downfall of umpires. The Minor Leagues have begun testing automated strike zones, and developments are being made to eliminate umpires. We could be without any umpires in the next 5 to 10 years. If recent news is any hint towards the future, umpires will be gone before we know it.

How many umpires are there in an MLB game?

How much do MLB umpires get paid?

The starting salary for an MLB umpire is $150,000. A veteran umpire earns more than $200,000. This is a great salary and well-deserved for these guys, as they make the most significant calls on the biggest stages.

How many umpires are there in the MLB?

According to MLB.com, there are currently 70 umpires in total across Major League Baseball.

Is there an umpire school?

Yes, there is an umpire school that provides the training necessary for this job. The school lasts about 30 days and provides credentials once you finish the course. Attending here puts you in a great position to be an umpire at the next level.

Future of the umpire

Umpires have always been a huge part of the game. They make some great calls and some terrible calls. MLB wants the bad calls eliminated, and you can’t blame them. The only answer is to get rid of them and add an automated strike zone.

Only the future will tell the fate of these guys. We can only hope for their inclusion to keep the game traditional.