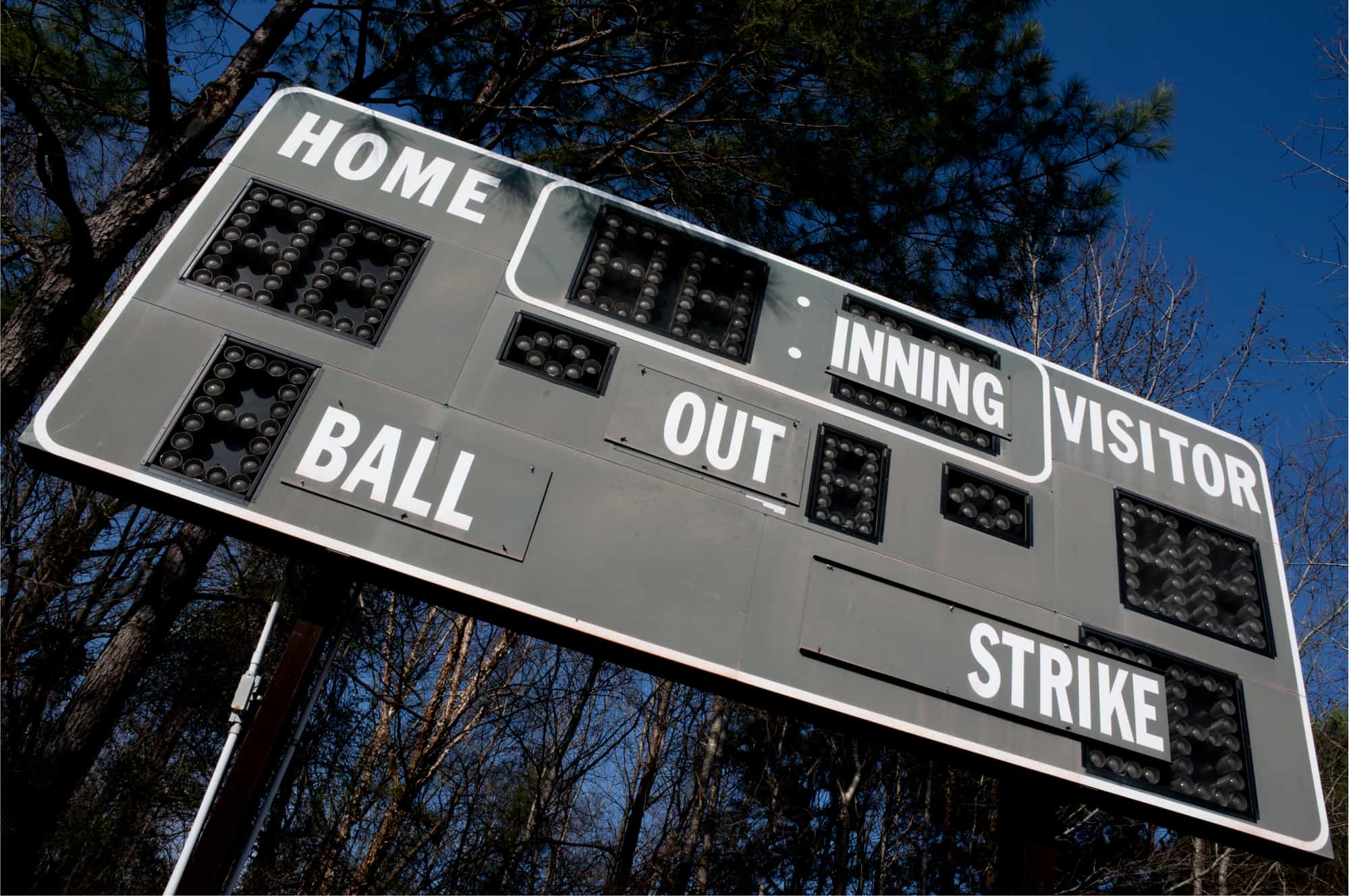 Baseball games can vary widely in length. The game’s length can be discussed regarding how many innings the game will last or how many minutes the game will last. Part of the beauty and complexity of baseball is that there is no clock. Therefore, games will not end after a specific amount of time.

Things like weather and double-headers (two games in one day) can shorten baseball games. Games are never intentionally lengthened but can last longer if the game remains tied after the standard number of innings has been completed.

Little League games, which cover baseball for ages 4 to 16, are usually scheduled to last six innings.

Baseball is a complex and exciting sport that can keep you on the edge of your seat for hours. So how long does a typical baseball game last? Let’s find out.

What is an inning?

An inning is a measure within a baseball game that includes a turn at bat for each team. Each team is permitted three outs within each inning. Once both teams have been out three times each, the game moves into the next inning. The only exception to this methodology is at the end of the game. If the home team is already leading the game when they come to their last turn at bat, they forgo their half-inning.

How long is an inning in minutes?

Much like the duration of a game in Innings, the number of minutes in an inning can vary widely. Typically, the more offense in an inning (hits, walks, runs, etc.), the longer the inning will take. However, a general rule is that innings take around twenty minutes each. Thus, a nine-inning game typically lands somewhere around 3 hours.

Factors that can impact the duration of a baseball game

A Pitcher’s Pace of Play

A pitcher is generally free to take as much time as he wants or needs between pitches at the Major League level. However, if the umpire feels the pitcher is abusing this privilege, they can issue warnings and insist on a faster pace of play. Technically speaking, a rule in Major League Baseball says,” When the bases are unoccupied, the pitcher shall deliver the ball to the batter within 12 seconds after he receives the ball. Each time the pitcher delays the game by violating this rule, the umpire shall call “Ball.” Despite this being the case, the rule is rarely enforced. College baseball implemented a pitch clock of 20 seconds in 2020, but Major League Baseball has been reluctant to implement one.

Some pitchers vary the speed at which they work to throw off batters or give themselves a moment to recollect their energy and calm their emotions. Unfortunately, this can cause innings to last significantly longer. A pitch clock could help standardize a pitcher’s pace of play, so this is something that baseball could implement across all levels soon.

A Batter Can Call for Time-Out

A pitcher isn’t the only one who can pause play. When a batter is standing in the box, he may request a time out from the umpire, who can halt the current pitch sequence. An umpire is not required to grant a timeout when one is requested. Batters will frequently use this when they need more time to prepare for the next pitch. They can also ask for “time” if they feel the pitcher has waited too long to throw the ball or if they want to attempt to break the pitcher’s concentration. This behavior can lengthen the duration of an at-bat and cause innings to last longer.

“The Human Rain Delay” was a nickname given to former Major League First Baseman Mike Hargrove. Hargrove was famous for taking excessive time to prepare for his at-bat before stepping into the batter’s box. Then, he would repeat his lengthy routine between pitches. The name is a reference to weather conditions that can extend a game.

Perhaps the most common and well-known weather impact on a baseball game is rain. Teams can play baseball in light rain, but when there is significant precipitation, players cannot firmly grip the bat or ball, and umpires will call for a pause in the game. Rain delays can last any amount of time – in some cases, the rain delay can last longer than the game itself. In Major League Baseball, the grounds crew will often roll a tarp over the infield during a rain delay to prevent the infield dirt from becoming soggy, significantly impacting ground balls. Workers remove the tarp after the pause and play resumes. Due to rain, if the weather shows no signs of letting up, an umpire can use their judgment to end the game pre-maturely. Depending on what point in the game this occurs, the game can be considered complete, or it will need to be resumed or restarted later. Generally speaking, an umpire can rule the game complete and official after at least five innings of a nine-inning game have been played. Any stoppage of play before this threshold is considered a suspended game.

High winds can have significant impacts on the duration of a baseball game. High-speed winds blowing in towards home plate from the outfield can cause airborne balls that might have otherwise been home runs to result in fly outs resulting in innings ending more quickly. Conversely, if the wind is blowing “out” towards the outfield fence at high speed, balls that would have otherwise been flyouts can turn into home runs. This can lead to more batters and lengthen the inning. High wind speeds can also lead to fielding errors as players struggle to judge where an airborne ball might land. Missed outs from these errors will lengthen the duration of the inning.

Temperature can also play a role in lengthening or shortening the duration of a baseball game. A study conducted by professors at the University of Nevada found, “Overall, offensive production is higher in warm temperatures than cold temperatures. Across all populations, runs scored, batting average, slugging percentage, and home runs show significant increases while walks show significant decreases in warm temperatures compared to cold temperatures.” Generally speaking, more offense means the game will last longer, while less offense typically means a shorter game. This study, among others, shows that cooler weather naturally produces games that are shorter in duration, and warmer weather produces lengthier outings.

There are no ties in baseball. With this being the case, baseball games are played until a winner is declared. An extra inning is added if a game is tied at the end of nine innings, or the standard number of innings for the given level. The visiting team is given three outs, and the home team is given three outs. Another extra-inning is added if the tie has not been broken following these six outs. This will continue until a winner is determined. There is no limit on the number of extra innings that can be played to decide a winner.

This rule does not exist for Major League Baseball. In all other levels of baseball, a rule is in place that says if a team is up by ten runs after seven innings of a nine-inning game (or six-and-a-half innings if the home team is ahead), the game can be called. In a seven-inning game, the rule is employed after the fifth inning. The Mercy Rule can be enacted in high school baseball if a team is 20 runs ahead after three innings or ten after five. And lastly, in Little League baseball, the rule can be applied if a team is ten runs ahead with four innings completed. This rule is in place to prevent one team from running up the score while ensuring the game ends in a reasonable amount of time. Whether or not this rule is enacted is often left to the managers or coaches of both teams. Managers/Coaches may elect to continue the game despite satisfying the above criteria, so long as both sides agree. If both sides cannot agree, the umpire will make the call as to whether or not to enforce the Mercy Rule.

A Forfeit Equals No Time Played

In rare cases where one team can not field enough players to play the game or can no longer continue, that team may forfeit. A forfeit will end the game at the point of forfeiture, or if this occurs before the start of the game, it will not be played at all. The forfeiting team will be charged with a loss, while the opposing team will be credited with a win.

What is the longest game in baseball history?

Not over until they’re over!

So as we have seen, baseball games can vary widely in length. Player behavior can speed them up or slow them down. Weather can cut into the offense and shorten the game, boost the offense to lengthen the duration, or even end it entirely. Extra Innings, Mercy Rules, and Forfeits can also impact the game’s length. Baseball truly is a sport that is never over until it’s over.