Skip to content
Learn about how many baseballs are used in an MLB game and what happens to all the used balls. 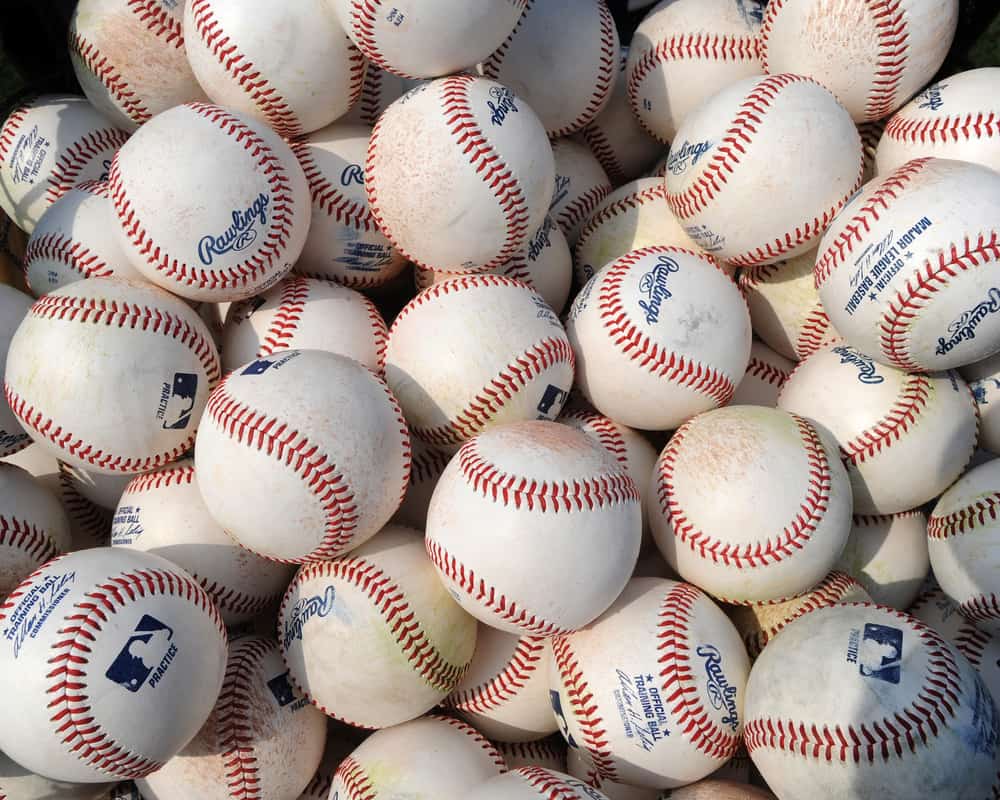 An average of 84 to 120 baseballs are used in an MLB game. The higher end of balls used in a game will total around 120, which will be considered a high amount.

Throughout nine innings, 120 balls may seem excessive. However, it all starts to add up with warm-ups between innings, foul balls, balls thrown in the dirt, and home runs.

A pitcher can request a new ball at any time, especially if it has signs of wear and tear and scuffing, but they are also replaced when hit out of play or when the ball is discolored. Still, it doesn’t mean it is the end of the line for each ball when the ball is replaced.

Do they reuse baseballs in MLB?

When balls are discarded, they are not reused. Instead, they are authenticated and sold in MLB shops as memorabilia. The home team collects and sells each discarded ball and will even note what happened during the play before it was discarded.

How often are baseballs replaced during a game?

Baseballs are replaced every three to seven pitches on average. This can depend on what happened during a play, how it is used, the quality of the ball, and whether or not it is damaged. Wild pitches and passed balls are among the most reasons why balls are replaced.

What does MLB do with baseballs that hit the dirt?

In the modern game, any baseball that comes into contact with dirt is usually discarded and replaced. Some of these balls will be used for batting practice, and some will be sent to the minor leagues. As soon as a catcher passes an umpire the ball that has hit the dirt, the umpire will pass him another. A lot of the time, these balls are passed to a kid in the stands.

Why do umpires throw out baseballs?

A scuffed-up baseball or one that has hit the dirt could give the pitcher an unfair advantage. Dirt on one side of a ball can influence the trajectory, giving it an unusual movement. This is an offense in the MLB.

Umpires throw out baseballs because of rule 3.01 of the MLB. This denotes that no player shall intentionally discolor or damage the ball. Be it with soil, rosin, or anything else. The ball and the offender will be removed from the game, with an automatic 10-game ban for the pitcher.

Why is it such a serious rule? Well, on August 16th, 1920, NY Yankees pitcher Carl Mays threw a dirty, grimy ball before pitching a fastball to Ray Chapman. On this sunny day, it hit the Cleveland Indians batsman in the head and resulted in a skull fracture. Later that day, Chapman died. It is believed that if Mays had thrown a clean ball, Chapman would have had a better chance of reacting. Therefore, rule 3.01 stands.

What does MLB do with used baseballs?

The MLB will collect used baseballs throughout a game and sell them in shops or online. This is via their official locations and sites and gives fans a chance to grab some genuine memorabilia, often from a game they attended.

Of course, balls that are hit into the stands are gone forever in this sense, but the collected balls are dated and fetch good prices.

Some are sold at auction, and some are saved for the Hall of Fame. Important baseballs are showcased for all to admire.

What is the record for the most baseballs used in a game?

It is hard to tell how many baseballs are used in a game since this isn’t a record that is kept like that of battering averages or strikeout rates. The top end is believed to be around 120 balls in a game, so it would have to be north of this. There are more balls used now than throughout history, as there are more reasons for a ball to be discarded.

How many baseballs are used in an MLB season?

Time to get the calculator out because of the sheer number of balls used per game and the number of games. Every season, between 400,000-580,000 baseballs are used. Every team plays a total of 162 games in a season. With 30 teams in MLB, this means there are around 2,430 games at 84-120 balls per game. When you factor in the postseason, that number can climb even higher. Some estimates are as high as 300,000! That’s a lot of balls for Rawlings to produce for the MLB alone.

How much do MLB baseballs cost?

Rawlings uses high-quality leather to stitch the balls used in the MLB, but you will be mistaken if you think they are pricey. An MLB baseball costs around $7 (minus shipping), with a million of them sold to the team every year. This is a big investment from the league, and this is the total spend just on baseballs.

How many balls do umpires carry?

An umpire’s pouch will generally hold around half a dozen balls. They hold enough balls to not slow down a game when they are called upon and will grab some more when their supply is getting a little low. Some umpires use one bag, and some use two.