Skip to content
Learn everything you need to know about stealing bases, from beginner tips to advanced strategies. 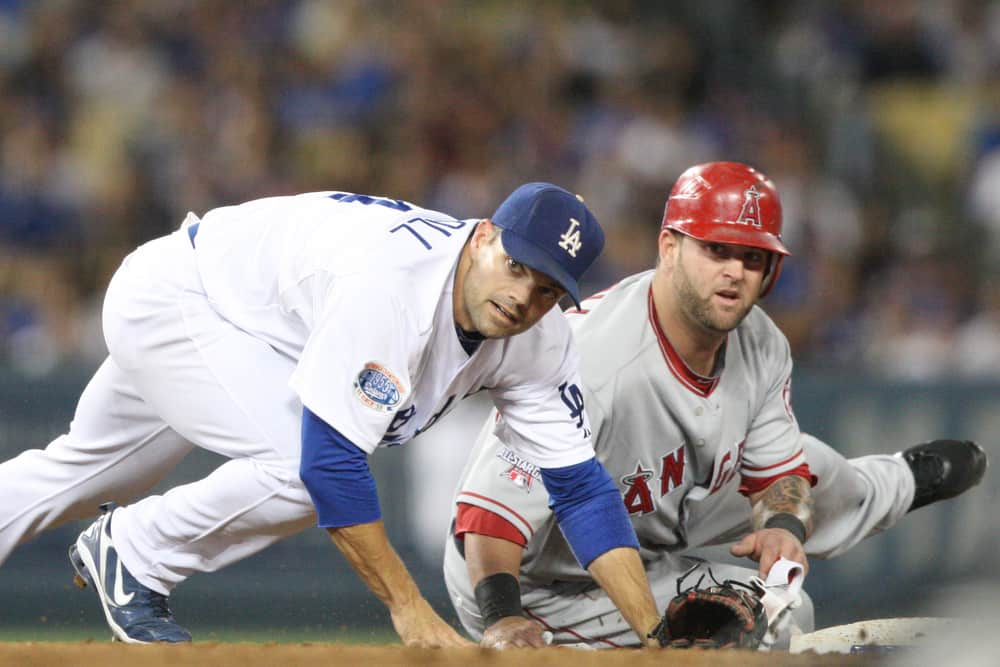 What does SB stand for in baseball? Stolen base, of course! This post will explore the art of stealing bases and provide tips on how to improve your success rate. Whether you’re a beginner or an experienced player, read on to learn more about this important part of the game.

SB stands for “Stolen Base” in baseball terms. A stolen base occurs when a base runner attempts to advance the bases without a ball being hit into play. The base runner will usually begin his attempt once the pitcher makes his pitch. As soon as the ball leaves his hand, the base runner will take off in a full sprint. It is up to the catcher at this point to get the runner out. If the runner is safe, he successfully steals a base!

Once you get past Little League, it is legal to take the lead before a pitch is thrown. A base runner will take a few steps off the base he is on to give himself a head start on advancing. He must be careful not to take a big lead, or he could get picked off by the pitcher.

The runner can steal anytime he would like. However, some exceptions come into play. A runner cannot attempt a steal when there is a foul ball or a foul tip. Both of these create a dead ball situation.

Another rule involved in base stealing is that the batter cannot interfere with the catcher’s throw to the base. If he does, the runner is automatically ruled out. The batter must attempt to avoid making contact with the catcher.

A balk would also create a dead ball situation. But, in this specific situation, it awards the runner the right to advance a base instead of returning.

Base runners that plan to steal should have their focus directed on the pitcher’s feet. If the pitcher is a right-handed pitcher, he must step off the rubber with his back foot (right foot) if he wants to attempt a pick-off move. That said, it is easy to tell if he is pitching or picking off. A simple rule is to look for which foot moves first. For a right-hander, left foot first means a pitch, while right foot first means a pick-off.

When should you steal a base in baseball?

Most of the time, it isn’t going to be your choice to steal a base. 99% of the time, your coach will be relaying signs to you. He will symbolize that he wants you to steal by giving you the steal sign.

It is also ideal to steal a base if you are only losing by one run. If you are on first base, stealing second base would put you in a scoring position for your team.

What is the purpose of a stolen base?

A stolen base allows a base runner to advance a base. The entire goal of a baseball game is for each team to score runs. You can only score a run if you touch all four bases. A stolen base gets one out of the way and brings you closer to home plate, where you can score a run.

Is stealing bases worth the risk?

While the answer depends on the situation, it is absolutely worth it most of the time. Your team’s main goal is to score runs. Scoring runs is the only way you can win a baseball game.

However, it can be too costly to steal in a late-game situation. If the game is in the ninth inning with two outs, you may want to avoid taking that risk of being called out on a steal, and the game is over at that point.

Some coaches may argue that the risk is worth it to get the runner into a scoring position. It all depends on who is hitting for your team. A solid hitter should be given the opportunity to hit and not have the chance to lose his turn on a failed steal.

No, stealing bases has been a part of the game for a long time, and it will stay that way too. Catchers have developed into being extremely efficient at throwing potential base-stealers out. However, this can be countered with a quick first step and a focus on stealing at the right time.

Tips for effective base stealing

As stated earlier, an effective base stealer is one who consistently catches the opposing team off-guard. Now, if you are extremely fast, you can get away with not being sneaky. Most of us aren’t blessed to be that fast, so we must resort to a strategic approach.

Can the throw beat the runner to the base but still be safe?

Yes, the throw must beat the runner, and the fielder must complete a tag on the runner. The runner is safe if the fielder drops the ball or misses the tag. It doesn’t matter when the ball gets there. The play is dependent on the tag.

What is the easiest base to steal in baseball?

The second base is the easiest and most common base stolen since it is the furthest base from the catcher. Since it is the most distant, the catcher has a longer throw to make and the ball has a longer distance to travel. The corner bases are pretty close and much more challenging to steal. This is why you see the vast majority of stolen bases happen at second base.

Are you allowed to steal home in baseball?

Yes, you can steal home as long as there is no dead ball situation. Home plate is treated like any other base when it comes to stealing.

Can an error cancel out a stolen base?

No, a stolen base will never be ruled an error. The only exception is if the error allows the runner to advance another base (s) from the error.

What percentage of stolen bases are successful?

Second base has the highest success rate when it comes to stealing bases. Third base comes in behind the second base. Since it is impossible to steal first, that is out of the picture. The least successful and least common one is stealing home. This play rarely happens.

How many bases can you steal?

As many as you like! There is no limit. You just are not allowed to steal first base.

Can you steal a base when the pitcher has the ball?

Yes, you can steal a base when the pitcher has the ball. As long as the ball is not dead and has been put into play, a steal is a legal play at that point.

Stealing bases is a strategy used throughout baseball and has been since the beginning of the game. This strategy can be massive for a team’s success. Some teams make a living off stealing bases since their team is so quick. It is never a bad thing to be good at stealing bases. Any team can profit by doing so.