Skip to content
Find out the science behind why baseball players chew sunflower seeds and what benefits they provide. 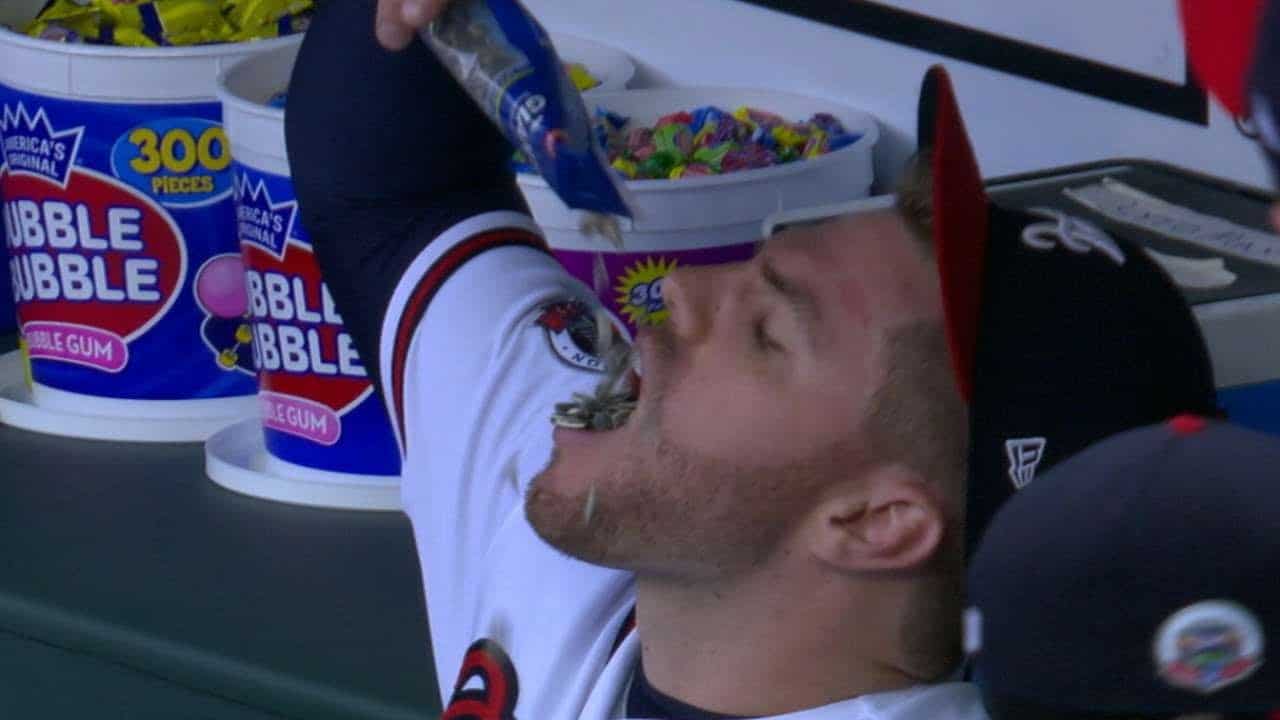 Do you ever wonder why baseball players seem to always be chewing sunflower seeds? It may seem like a strange habit, but there’s actually a good reason they do it. In this post, we’ll take a look at why players chew sunflower seeds and what benefits they get from doing so. So, keep reading to learn more!

How did sunflower seeds become such a big part of baseball culture in such a short time? There are many different answers. But one thing that is second nature today is the sight of major leaguers chewing bag after bag of sunflower seeds.

In 2005, Jose Valentin (who then played third base for the LA Dodgers) was quoted by ESPN, “a dugout without sunflower seeds is like a liquor store without alcohol.” Also, consider this: An official MLB baseball weighs 5.25 ounces. When you buy sunflower seeds at the stadium, guess how much the bag weighs? There is a reason for that, and here is that story.

In the video below, you will see some of the charms of sunflower seeds in our national pastime.

Like other food products that baseball players enjoy during games, sunflower seeds keep the mouth busy and active which has several benefits:

First, baseball is a one-team sport played on a field with dry dirt. The dirt used on baseball infields contains a combination of sand, silt, and clay.

As players run the bases or play in the infield, the dust and sand get into their eyes, nose, and especially their mouth. Players keep a bag of sunflower seeds in their pockets to chew on and spit out throughout the game to prevent discomfort and unpleasant taste.

The health benefits of sunflower seeds are well documented. Snacking on sunflower seeds is not only cheap and convenient, but they also contain valuable nutrients like potassium, calcium, iron, protein, and much more.

Some players use sunflower seeds as a healthier alternative to smokeless tobaccof. As players chew and spit the sunflower seeds, the brain remains stimulated and occupied, which allows for better sensory perception. Simply put, by chewing sunflower seeds, players can react quicker and make better decisions at the moment during games.

As a second benefit, studies have also shown that chewing sunflower seeds reduces anxiety and stress. Not only do the seeds themselves have magnesium which has been linked to improved mood, but the act of chewing is also effective for helping to cope with stress and anxiety because of its effect on the nervous system.

Like smokeless tobacco or anything else, the chewing motion can be habit-forming, including chewing sunflower seeds. You will not see people diagnosed with an addiction problem because of sunflower seeds, but the brain is calmed by routine habits, which can be hard to break.

In the video below from a local news affiliate in Minnesota, watch when the news anchors talk to the Minnesota Twins players about spitting in baseball. Sunflower seeds are one of the main reasons, and they even show journalists how to do it.

What is a sunflower seed?

A sunflower seed is just that, the seed of the sunflower plant. There are several different species of sunflowers, but people enjoy eating the seeds or oils from all of them for various reasons. Some are good for harvesting seeds for eating, and some are better for processing into cooking oil.

The interesting fact is that the term sunflower seed is technically incorrect. The shell, or hull, contains the sunflower kernel, which is the soft inside part that is chewed and swallowed. What we eat today are not actually seeds in the technical term, but it has been such a part of popular culture for so long that it is unlikely ever to change.

Did MLB ever ban sunflower seeds?

Yes, MLB banned sunflower seeds for one season during the pandemic of 2020. The rule was not aimed at sunflower seeds alone but intended to prevent players from spitting.

To prevent the spread of the virus, players were banned from spitting, which caused them to give up habits like chewing seeds, gum, or tobacco. At the height of the pandemic, MLB created a rule stating that spitting was prohibited, “including but not limited to saliva, sunflower seeds or peanut shells, or tobacco.” That rule is no longer enforced today.

When did baseball players start chewing sunflower seeds during games?

Sunflower seeds started to appear in MLB games in the 1950s. At that time, two famous players, Stan Musial and Enos Slaughter, were both advocates of sunflower seed chewing during games. The trend did not spread nationwide until the 1970s. In the early 1970s, Hall of Famer Reggie Jackson (then with the Oakland A’s) was one of the most popular players in America and a fan of sunflower seeds. The story is that so many kids wanted to play like Reggie, and chewing sunflower seeds became popular.

There is no single correct way to eat sunflower seeds, but in baseball, there is a prescribed method. Players will put several seeds in their mouth at one time and pack them on one side of the mouth between the teeth and the cheek. Then, the tongue can pick up the seeds one at a time and bring them to the front teeth that are used to crack the shell.

While that is the common method, some players will just suck the salt off the shell to replace the salt lost during sweating. Once the flavor is gone, they will spit it out whole. It is not recommended to chew the seeds and shells together. While it is not unhealthy, the sharp shell fragments can be dangerous and cause damage to the throat or stomach.

How many sunflower seeds do baseball players eat?

According to a recent study, it has been said that MLB players consume approximately 300,000 bags of sunflower seeds during a season. That averages to about 60 bags per team per game, with a bag of seeds weighing 5.25 ounces (identical to the weight of a baseball), which equals 94,437 lbs. of sunflower seeds per year.

In the video below, you will see a collection of interviews of major league players being asked if they prefer bubble gum or sunflower seeds. Try not to laugh at some of the answers.

What is the official sunflower seed of MLB?

MLB has a contract with the DAVID Seeds brand of sunflower seeds. They also sponsor youth leagues and amateur baseball around the country.

What player was known for chewing the most sunflower seeds?

While it is unknown who has eaten the most, the most famous baseball player associated with sunflower seeds is Hall of Famer Reggie Jackson. Jackson was a highly touted prospect and immediately popular when he signed with the Oakland A’s in 1968. Back then, Jackson routinely had bags of sunflower seeds in the dugout near him. Because so many young kids wanted to play like him, the demand for sunflower seeds skyrocketed.

This is what makes baseball so complex, complicated, fun, and fascinating. Chewing sunflower seeds adds to the rich history of the game. The health benefits are great, and it gives players a chance to have some fun.