Skip to content
Find out why baseball players are still using chewing tobacco, despite the health risks. 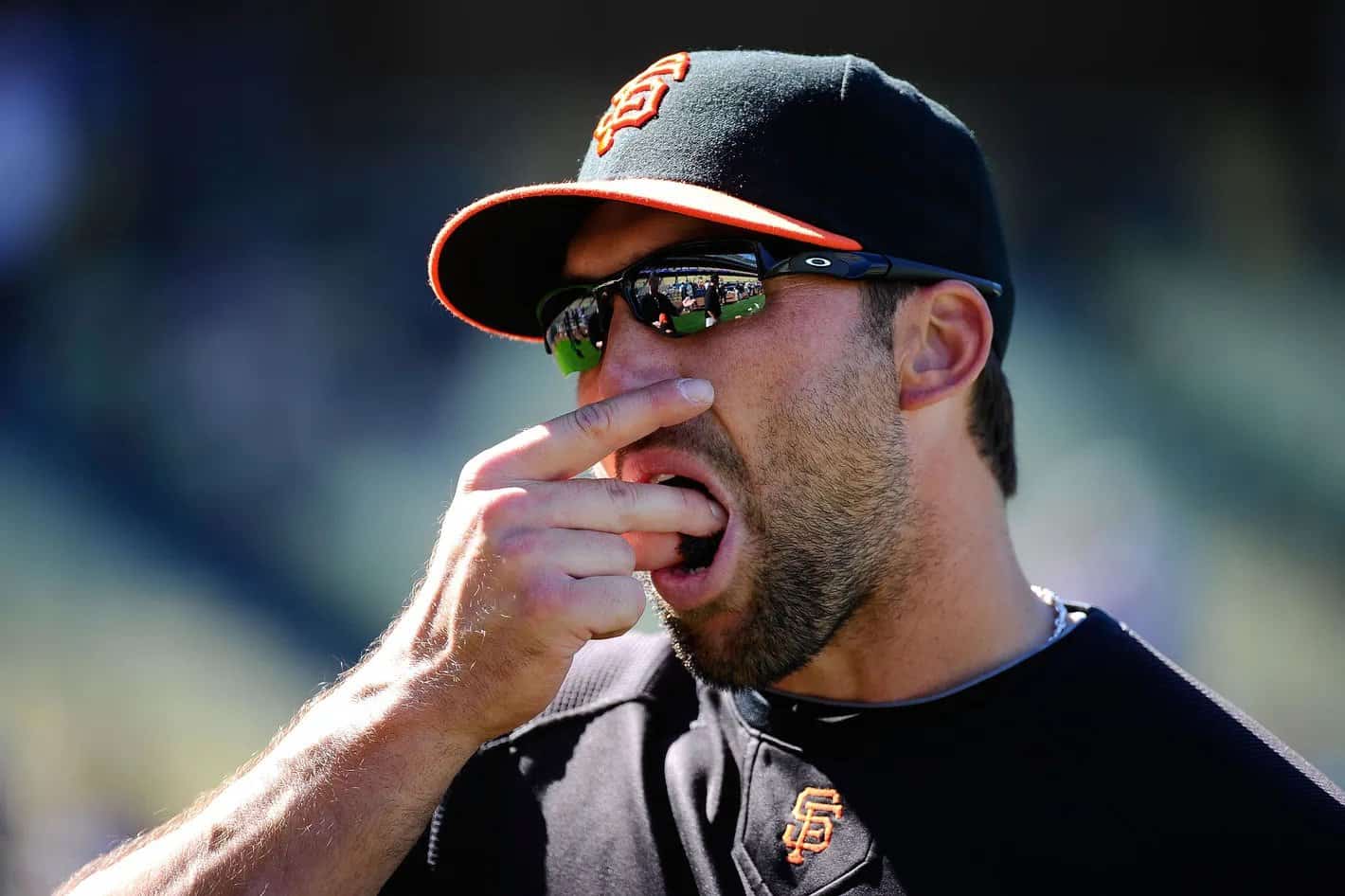 Do you ever wonder why baseball players chew tobacco? It seems like an odd habit, but there’s actually a reason for it. Keep reading to find out more!

While the practice of chewing tobacco leaves has been around since the 1400s, people only realized the potential dangers of it in the late 1900s. After hundreds of years of consuming tobacco, people formed customs, habits, and traditions that are hard to break. This especially includes baseball players.

Tobacco has been a part of baseball since its creation, and despite the warnings of the medical field, it is still popular among players today.

For a brief history lesson on tobacco and baseball, watch the piece below that was broadcast on CNN in 2014 to learn even more:

Why do baseball players chew tobacco?

There are several reasons why baseball players chew tobacco during games. Here are the most common:

First, players chewed tobacco during games to prevent dry mouth. Baseball infields did not always have special dirt specifically designed for the game. In the early days of baseball, the dirt was not maintained like it is today, and dust clouds were a common sight. Because of this, players used tobacco to moisten their mouths. The reason is that when someone chews tobacco, it causes the saliva glands to create more fluid, which then keeps the players’ mouths moist.

Second, it is a familiar sight to see players spit into their gloves when chewing tobacco. While this is not good for the leather over a long period of time, in the short term, the saliva loosens up the leather and allows for better flexibility and control of the glove. Also, the tobacco residue in the saliva sticks to the leather and makes it tackier, which helps in fielding hard-hit balls.

It was not known until late in the 20th century that smokeless tobacco was habit-forming and could be addictive. Science has proven this theory, and because of the tobacco exposure within baseball, many players do end up forming a physical habit.

The chemical compounds in smokeless tobacco can bring feelings of relaxation and calm to some users. In contrast, others may experience a slight dopamine increase due to tobacco’s nicotine. Many players have argued that tobacco does enhance their playing performance, and science proves them right.

In the video below, check out an interview with current Cleveland Guardians manager Terry Francona in which he explains his views on tobacco in baseball:

Baseball players have chewed tobacco since the game was invented. Tobacco use was very prominent in the mid-1800s, and that included baseball players. In fact, history tells us that the average American consumed more than three pounds of tobacco per year in the 1890s.

How does nicotine affect baseball players in a game?

When the brain is exposed to nicotine, it responds by releasing a brain chemical called dopamine. This gives the brain a relaxed and calm feeling and reduces anxiety. With anxiety reduction, baseball players claim to have better concentration and focus when they are at-bat or in the field. Despite those claims, no scientific evidence supports the idea that nicotine is a sports performance-enhancing substance.

Is chewing tobacco banned in MLB?

Technically, tobacco is banned for some MLB players but not others. In 2016, MLB created a rule that prohibited the use of smokeless tobacco for all new major league players. Because hundreds of players were already chewing tobacco daily, MLB decided to allow players already in the league at the time of the rule change to continue consuming tobacco.

Currently, smokeless tobacco is banned by state law in 16 of the 30 stadiums in MLB.

Are there baseball players that still chew tobacco today?

There are still some players who chew tobacco today. While they are not banned from chewing tobacco, they are not allowed to be interviewed on TV while chewing or visibly doing it on the field of play. Also, all state and local laws must be followed by MLB, so in stadiums like San Francisco or Boston, no smokeless tobacco use is allowed by anyone, including the players.

Which baseball player chewed the most tobacco?

Baseball historians mostly agree that current Cleveland Guardians manager Terry Francona is baseball’s most notorious tobacco chewer. One of his most famous tobacco-related incidents was in 2016.

During Game 3 of the ALCS, Francona lost a tooth while chewing tobacco. The story is that the team had to scramble to find a dentist at 1 a.m. after the game and get them to the stadium to fix Francona’s tooth.

Did a baseball player ever get sick from chewing tobacco during a game?

Yes, there have been a few incidents of players getting sick from swallowing chewing tobacco during a game. In 2014, outfielder Carlos Gonzalez of the Colorado Rockies was pulled from a regular season game in the 6th inning. This was not a traditional substitution.

Gonzalez had swallowed his tobacco earlier in the game and started to experience dizziness and dehydration while in the outfield. Everyone was concerned until Rockies manager Walt Weiss told the press after the game, “He landed hard, knocked the wind out of himself, swallowed some dip, dehydration, all those things were factors.”

What are the influences of tobacco on the game of baseball?

Tobacco has had a close bond with baseball since the beginning. In the early 1900s, baseball teams had their own official cigarette and chewing tobacco partners. Some tobacco companies cashed in on the growing popularity of baseball and sponsored players such as Babe Ruth, Lou Gehrig, Cy Young, Ty Cobb, and many more of baseball’s early superstars.

In the video below, you will see a television commercial that aired in 1979 and starred Detroit Tigers pitcher Sparky Lyle. Enjoy Lyle talking like a cowboy as the pitchman for Levi Garret brand chewing tobacco:

A game of tradition

Baseball is a sport steeped in tradition. Some traditions are good, and some are not so much. Regardless of one’s opinion of tobacco use, no one can deny its impact on baseball’s popularity and vice versa in the early 1900s.

The sports trading card industry (now a multi-million dollar per year enterprise) started it all when they added small pictures of famous baseball players inside each pouch or pack of cigarettes. Tobacco will always be a part of baseball’s past, but now baseball players, young and old, are switching to gum like Big League Chew or their favorite flavor of sunflower seeds for a healthier future.