Skip to content
Baseball players spit for a variety of reasons. Here are just a few of them. 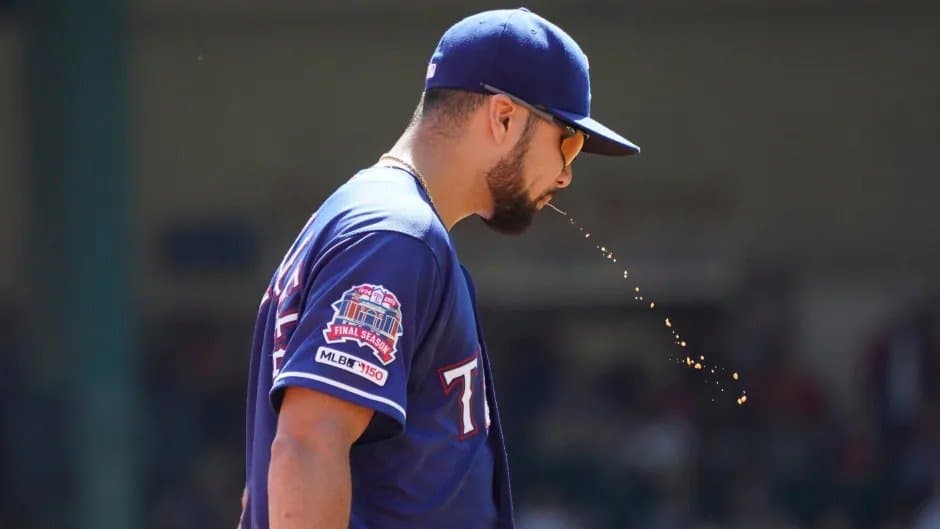 It’s a question that’s puzzled baseball fans for years: why do players spit so much? It seems like every other player is hawking up a loogie on the field. Some people say it’s just a bad habit, but others believe there must be some deeper meaning behind all the spitting. In this blog post, we’re going to explore the different theories behind baseball players’ copious spitting and see if we can finally get to the bottom of this mystery.

In the early days of baseball, there was not much consideration given to the dirt on the field. Whatever the local climate offered was the playing surface. On some occasions, early baseball stadium groundskeepers would find whatever local resources they could. They used dirt from farms, riverbeds, and construction sites to ensure the field was level. Some fields even used dust and ashes to fill holes in the area.

What does all of this have to do with baseball players spitting? Just about everything. Read on to find out why.

For some bizarre fun, watch the video below from the Jay Leno show in 2008. On this show, Leno has a group of baseball fans who collect players’ spit around Major League Baseball. Enjoy the humor and video clips of famous players spitting into glass jars in this odd collection:

Why do baseball players spit?

There are several reasons why baseball players spit, but no one argues that spitting has been a part of baseball since it was invented in the early 1800s.

Baseball stadiums in the 19th and early 20th centuries had infield dirt, but it was not regulated or maintained like it is today. As players played, fans would have their views obstructed by dirt and dust clouds each time a player would slide or run in the dirt. The extreme amounts of dust and dirt in the air are ingested by players in the field, which dries out their mouths and thickens their saliva. Players chew tobacco, bubble gum, or just spit to keep their mouths moist and prevent this discomfort.

Also, saliva works as a temporary softener and lubricant for baseball gloves. To get the best performance from a baseball glove, they need to be soft, flexible, and easy to open and close. To achieve this, players will spit several times in their gloves and wipe them around the leather to make the glove less stiff and easier to use.

There are two simple reasons that people spit during sports. Excessive movement during sports causes the body to generate high levels of protein. This protein causes saliva to thicken, which can be difficult to swallow.

Also, due to the anxiety that comes from playing sports, players will spit to calm their nerves or soothe themselves. Science has proven that these activities help keep the mind occupied and help lower stress and anxiety.

When did baseball players start to spit?

Baseball players have been spitting since the invention of baseball in the early 1800s. Aside from practical reasons like dry mouth and glove softening, chewing tobacco was popular at the time, and most adult men used it, including baseball players.

Does spitting help a baseball player?

Spitting has some uses to help players play better. First, saliva helps with gripping the ball and bat. You will see baseball players spit on their batting gloves to ensure they have a tight grip on the bat and spitting on their fielding gloves to help improve the grip and stickiness, making it easier to catch the ball.

Is there a biological need to spit?

According to science, yes, there is a biological need to spit. There are several reasons why. First, people who consume meat will have thicker saliva, and many spits out the extra mucus. Also, with a lack of saliva, people struggle to eat, swallow, and even speak. These struggles are even harder for baseball players on a hot, dirty baseball diamond because the environment creates a real need to spit out excess saliva.

Why do baseball players spit in their gloves?

When is it illegal to spit in baseball?

There are a few instances when it is illegal to spit in baseball. First and most apparent, players cannot spit on another person. It does not matter if it is an opposing player, an umpire, or a fan. All of these have happened in the past, and players have been punished for it.

Second, it is illegal to spit on the ball. The rule banning spitting on the baseball was created in 1920 after the tragic on-field death of Ray Chapman when he was hit in the skull with a spitball. For this reason, pitchers are also not allowed to spit on their hands either. They can warm their hands with their mouths in cold weather, but if the opposing team thinks the pitcher is adding saliva to the ball, they can request to have the pitcher investigated.

In the video below, you will see Hall of Fame second baseman Roberto Alomar get ejected from a game for arguing with the umpire. As they argue, watch closely as Alomar gets in the umpire’s face and lets one fly.

MLB officially banned spitting for one season in 2020 because of the pandemic. Once it was determined that the COVID-19 virus could be transmitted through saliva, MLB decided to ban all spitting for the shortened 2020 season. This included saliva, the spitting of sunflower seeds, and tobacco. The rules committee made this decision out of concern for player safety, but the rule was not seriously enforced after the 2020 season. According to the new MLB collective bargaining agreement that takes effect in the 2023 season, all pandemic-related rules will be repealed, and the original rules around tobacco and spitting will be back in place.

While spitting is not considered hygienic or attractive, the act has specific health benefits that significantly matter to baseball players. While the game of baseball slowly evolves and removes old traditions and customs that are no longer in players’ and fans’ best interests, spitting will never be on that list.

Eventually, many believe that tobacco will be gone from baseball for good, but it has been replaced with gum, sunflower seeds, and more. For better or worse, players choose to be practical, ready and armed with all the saliva they need to remove dust, soften their gloves, and entertain themselves on a slow afternoon.