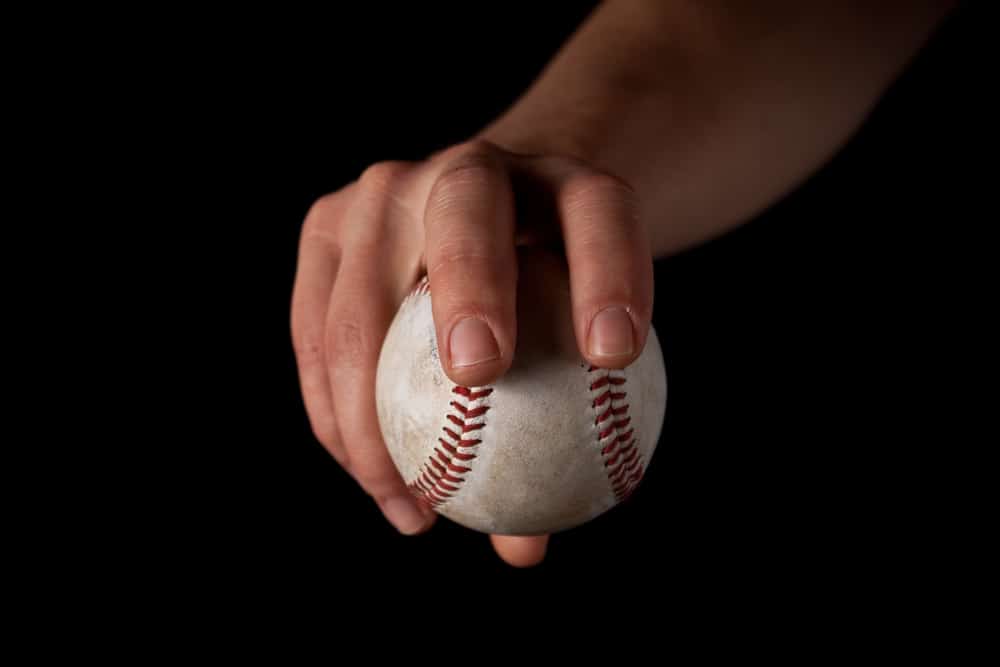 Pitchers have many choices to make when it comes to what type of pitch they want to throw. In this post, we’re going to take a look at the 4 seam fastball vs. the 2 seam fastball. We’ll discuss how each pitch is thrown and how it affects hitters. Lastly, we’ll give you our take on which type of fastball is best.

The main difference between a two-seam fastball and a four-seam fastball is movement. You will also notice a difference in speed, but the biggest difference is in the way the ball moves. In addition to speed and movement, you will find that grip and control also vary with the pitches.

One benefit of a four-seam fastball is that it is easy to spot because it has no movement. If you are behind in the count and need a strike, this is a great pitch to use. A risk with throwing the four-seam fastball is that it has no movement. If you place the ball in the center of the strike zone, or a batter’s wheelhouse, you can give up a big hit.

Throwing a two-seam fastball is simple. Again, the mechanics are the same as the four-seamer. The difference between the two is the grip. In this case, you will hold the ball so that the seams form a “U”. Using your index and middle fingers, you grip the ball on the two seams at the top of the “U”. As you grip the ball, place more pressure with your index finger. This will allow more movement in the pitch.

The two-seam fastball is a great pitch to use if you are ahead in the count. Since the ball will “run” or move, it is best not to use it when you are far behind in the count as it might run out of the zone.

The pros and cons of the two-seamer both deal with the movement. It’s a great pitch for you to use if you want to jam or confuse a hitter. If you are a righty, the pitch will run in on a right-handed batter. If you are a lefty it will run in on a left-handed batter. The ball tends to run or drift in the direction of your throwing arm’s side. The con, or hard part, about using the two-seamer is that it can be hard to spot in the strike zone.

You will find that this pitch will move based on the amount of pressure you use with your index finger. The other variable for movement will be how much you choke the ball in your hand.

Which Pitch is More Important to Learn?

The answer to which pitch you should learn is simple – both. The two pitches complement each other. If you have a fastball that moves and one that you can spot, you have a better chance against any hitter.

Which Pitch is Faster?

Is a Cutter the Same as a Two-Seam Fastball?

The cutter is not the same as a two-seam fastball. The cutter has a very late break to it. If you throw this pitch to hitters using wooden bats, you may notice several broken bats because of the late break of the ball. If you are throwing against aluminum bats you will notice that the pitch often avoids the “sweet spot” of the bat.

Another difference you will notice is that the cutter breaks opposite of the two-seamer. If you are a righty, it will break in on the hands of a lefty – or away from a right-handed hitter. The cutter is a great pitch for you to throw on the outside of the zone against a lefty as it will appear to be a ball, but will break back into the strike zone.

Does a 4 seam fastball rise?

Is a four-seamer the same as a fastball?

A four-seam pitcher is one example of a fastball. There are many different types of fastballs that you can throw. A four-seam fastball is part of the fastball family but is not the only type of fastball.

Why is it called a four-seam fastball?

The pitch gets its name because it looks like you can see four seams when it travels towards you. As the ball rotates you see four seams which is different than what you see with a curve or a two-seamer.

Is a two-seam fastball a sinker?

Who has the best four-seam fastball?

This is a difficult question to answer. There are many variables for you to consider when putting together this list. Are you considering the best fastball the one that travels the fastest? Is it the most difficult to hit? Are you considering which pitcher relies on their four-seamer the most? The one who gets the most outs?
According to a study by Bleacher Report, Brandon Woodruff has the ultimate four-seamer in today’s game.

Which is more popular?

The four-seam fastball is more popular because it is easier to throw. The first grip that you will probably learn is the four-seamer. Fielders use this grip because the ball does not move. When you learn more control you will advance to the two-seam fastball

The fastball umbrella includes many different pitches. The more grips that you can master and control, the bigger your advantage will be as a pitcher. Fastballs are not just about speed, but also the movement that you can use to upset a hitter’s timing and balance. I hope you now have a better understanding of four-seam vs. two seam fastballs.