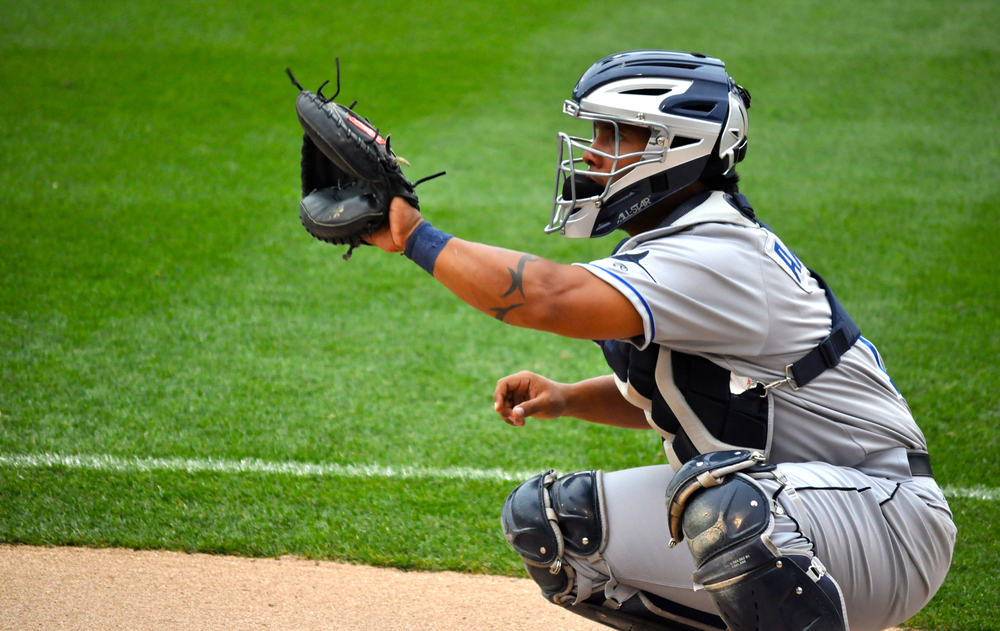 One of the unique rules in baseball is the dropped third strike rule (also known as the uncaught third strike). This rule can only occur on a strikeout pitch. There is a bit of nuance to its implementation, and it can result in the rare occurrence where more than three outs are required to end an inning.

What is the dropped third strike rule in baseball?

The dropped third strike rule in baseball is when a hitter strikes out, whether swinging or looking, but the catcher fails to catch the pitch in the air. If the ball hits the ground on a third strike, the hitter is permitted to run to first base. If the catcher can recover the ball and throw it to the first baseman before the hitter arrives, he is out, but If the hitter makes it safely to first base, no out is awarded to the defense.

What conditions are necessary?

Where did we get the dropped third strike rule?

To find the answer to this question, you must look at some of the earliest origins of baseball. In 1796, a book by German physical education advocate Johann Christoph Friedrich Gutsmuths described a game very similar to baseball. One primary difference was there were no “called” strikes, only swinging strikes. In Gutsmuths version of the game, the pitchers would stand very close to the batters, and his pitches were high arcing lobs. To prevent a never-ending at-bat, a three-strike rule was put into place, giving a hitter three attempts to hit the ball. A consequence of this rule was the ball was now considered “in play” or a fair ball after the third strike, whether the batters hit it or not. The pitchers, who were nearby in this version of the game, could field a ball not hit on the third strike and throw it at the runner for an out. Ouch.

By 1845, the pitchers had moved further away, which now warranted a fielder to block pitches that took a more horizontal path than the preceding high arc. At this point in the evolution of the rules, a batter was considered out if the catchers caught the third strike in the air OR on the first bounce. This was the beginning of the actual battle between pitchers and batters, ultimately leading to the intentional strikeout.

The rule continued to evolve over the years, undergoing many changes in language, such as whether a dropped third strike was a fair ball or foul. Unfortunately, it also led to an unintended consequence where catchers could intentionally drop a third strike (or strikeout pitch) to initiate a double play. In the late 1800s, the aspect of intentionally dropping the third strike was mitigated by another change in the language. However, the counterpart of the rule, allowing batters to advance to first on a dropped third strike, remained and still exists today.

Can You Run on a Dropped Third Strike With Bases Loaded?

We must revisit the conditions necessary for the dropped third strike tule to be in play to answer this. If there are less than two outs, the batter would not be permitted to run as first base is already occupied. If there are two outs, the batter may attempt to run to first on a dropped third strike, but the nature of bases loaded would mean a force-out is available at any base, so the catchers simply need to pick up the ball and step on home plate.

Can a runner score on a dropped third strike?

Yes- as with nearly any play in baseball, the baserunner is permitted to run at his own risk. Depending on how far away the ball gets from the catcher on a third strike, the runner may have time to reach home plate before the catcher can recover. The run will count, provided a force-out does not otherwise end the inning.

How is a dropped third strike scored?

A dropped third strike is recorded as a strikeout using a K. In addition, catchers will be charged with an error, or E2, if they cannot recover the ball and throw to first before the runner reaches. If the catcher can recover and throw the ball to first base for the putout, they receive a 2-3 putout. Therefore, if the runner reaches, it is scored K-E2, and if they are put out, the play is scored K-2-3. Other options can occur if the catchers record the out at another base, but any scoring of a dropped third strike begins with the K.

How Does a Dropped Third Strike Affect Batting Average?

Does a Dropped Third Strike Count as an Out?

This strikeout does not count as an out. Therefore, this will still be scored as a strikeout, but it will not be an official out, and an error will be charged to the catcher for allowing the batters to reach first. Though not recorded officially as an out, you will often hear this discussed as causing the fielding team to need to produce an extra out and opening the possibility of producing four outs in an inning though an actual “fourth out” is an entirely different rule.

What About If the Runner Is Stealing?

The dropped third strike is the same in youth baseball leagues as it is for Major League Baseball. If a third strike is not caught, the batter is permitted to become a baserunner provided there are two outs, OR there are less than two outs, and first base is unoccupied. The catcher must then attempt to either tag the batter, now runner, or put the runner out by throwing to first base.

The Most Obscure Rule in Baseball

The dropped third strike rule is one of the most obscure rules in baseball. Its roots date back to a time when the game was played very differently from how it is today. The situation that requires the implementation of this rule does not arise often, but it is always frustrating for pitchers and catchers and rewarding for the batters when it does.