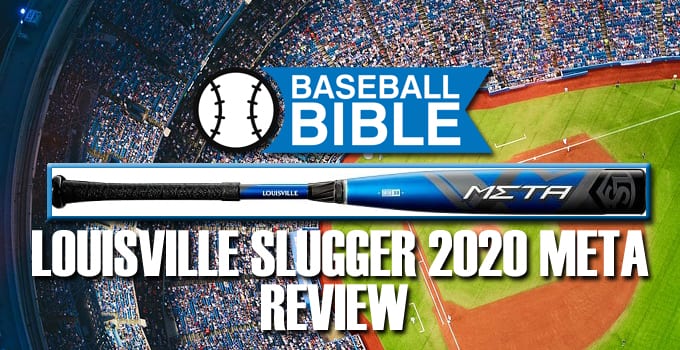 Louisville Slugger has always been one of the top bat companies when it comes to baseball, and they’ve recently released another one of their amazing creations. Over the years, I’ve reviewed more bats from this manufacturer than I care to count but each one still manages to baffle me with how much they improve the quality from the last bat to the next, especially this Louisville Slugger 2020 Meta.

With other bat manufacturers, you feel like their new releases are nearly identical to their old models with a few tweaks and some minor improvements.

In contrast, it’s like a new generation of baseball bats has been released to the world whenever you pick up one of the new models from Louisville Slugger. Just based on the manufacturer itself I was already going into this review with high hopes and once I actually got to take the bat for a field test I was not disappointed.

My already-high expectations were not only met but exceeded by a long shot. Here are some details on the bat as well as my personal testing experience with it at the end. Let’s get right into it.

The first thing that you should know about this bat is the fact that it’s a balanced weight bat. I wouldn’t advise that you go into a baseball bar and bring up this topic as it’s actually one of the more controversial discussions in the world of baseball. There are some who’ll swear by end-loaded bats and say that balanced weight bats are for weak players.

I like to think of myself as an objective person and I’m brave enough to admit that both variants have their merits (despite the fact that I’ve now infuriated both sides with that sole statement. That doesn’t mean that balanced weight bats will perform the same for you as an end-loaded bat will.

It actually comes down to your physique and playing style. If you’re a heavy hitter like Babe Ruth then you should probably be going for an end-loaded bat actually. That being said, it’s not easy to get to Ruth-level swinging power unless you have good genes or a crazy workout routine. Since that’s the harsh truth about baseball, you should really try to acquire a great balanced weight bat like the Louisville Slugger 2020 Meta.

If you’re not familiar with why balanced weight bats are good for players who have average swing speeds then let me break it down for you. The idea behind end-loaded bats is that there’s more material in the hit area thus it leads to harder hits.

However, if you don’t have enough swing power — which is nothing to be ashamed of — then you might not be able to swing it fast enough. Balanced weight bats, in contrast, have the material evenly distributed across their surface meaning that even players with an average swing will be able to generate high power in each hit and get more consistent results. If you can lug one of those heavyweights then I admire you, but don’t be afraid to go for a balanced weight bat if it helps you perform better.

If you’ve read some of my other bat reviews then you probably already know all about the debate between one-piece bats and two-piece bats. If you aren’t familiar with the discussion then the summary of it is that one-piece bats help heavy swingers retain all of their power while two-piece bats help the average joe swing harder due to the whip effect that the two pieces create.

This brings us to three-piece bats. You’re probably wondering what the third piece could be since the barrel and handle are the only pieces you’d see on a bat.

Well, the third piece that makes up three-piece bats is known as the flexband. Think of it as a mediator between the barrel and the handle. The flexband goes between the two parts of the bat and takes care of the main problem in two-piece models — the vibration.

In most two-piece models, you’ll find that the energy in the barrel will echo into the handle of the bat. In contrast, the flexband in three-piece bats is like a shock absorber that keeps the vibration in the barrel away from the handle. This is a revolutionary shift in design that the three-piece bat brings to the table and can really bring your performance to the next level.

I was a bit reluctant to believe that a three-piece bat concept could even work but Lousiville Slugger definitely executed it perfectly and the Louisville Slugger 2020 Meta is a prime example of that.

If you know anything about me then you’re probably more than familiar with the fact that I value the warranty on all bats I buy. It’s not so much because I anticipate that I’m going to have to use the warranty but more so concern for a lack of it. Let me explain what I mean. The warranty is like a seal of approval except from the manufacturer of the product itself.

That may seem narcissistic but at least it shows that the manufacturer has enough faith in their bat to put a warranty on it. If the very people who made the bat don’t trust the quality enough to back it up with a full warranty then why should I invest my hard-earned cash in it?

Of course, there are some great bats out there that I’ve reviewed that don’t have a warranty that I personally love so it’s not a solid rule, but definitely something to consider if you’re looking for your first bat and are concerned that some of them may be of subpar quality.

My personal experience with this bat was, to put it simply, groundbreaking. I’m always stunned when I pick up a new Louisville Slugger model and this time around was no exception. When I first picked the bat up it felt really good in my hand. The balanced weight made it feel like I was wielding a Japanese katana except for baseball.

With my first swing, I was surprised at how sturdy it felt. Too vague? Let me elaborate then. When I usually use two-piece bats I enjoy the whip effect but it always bugs me when the vibration echoes all the way down to the handle from the barrel. With this bat, the swings felt totally solid and stiff without any vibration reaching my hand. This is, of course, due to the flexband between the barrel and handle.

This third piece made a world of difference in the actual performance of the bat and makes it far easier to use it. My overall performance throughout the entire practice session was higher than my average and I attribute most of it to the vibration-free handling of this model. One of the reasons why Louisville Slugger has remained one of the bat companies over the past century is the fact that they stay on the cutting edge of technology when releasing every new model.

Furthermore, some would even say that they make the cutting edge themselves rather than staying on it since they don’t just follow suit but actually make the trends on their own.

There were headlines when Louisville Slugger released their first three-piece bat. Some were positive anticipation while others were harsh criticism from those who doubted the efficacy of a three-piece model. On both sides — positive and negative — there was a clear interest in how a bat with three pieces would actually perform.

Early on, people were even wondering what the third piece would be since there has only been a maximum of two for as long as I can remember. All that hype that I felt within my soul paid off when I used this bat myself.

I can tell you right now that using a bat like the Louisville Slugger 2020 Meta that features the flexband is a truly unique experience that no ballplayer should miss out on. While this isn’t an end-loaded bat it still had a nice pop to it on every hit and generated the fast swing speeds that I’ve come to expect from this manufacturer.

The plan was to test this for a full day before writing the review but I ended up putting in nearly a week of testing time. I told most people that it was about “ensuring I write an accurate review” but I could have done that after the first few swings. The extra testing was just about fun, pure fun.

As you can see, there’s a lot to love about this bat. The balanced weight means that anyone can get good results out of it even if their swinging power isn’t at a level that you might see in the big leagues. The flexband truly lives up to its promise to revolutionize the way that bats are constructed since it made this bat feel stiff and devoid of any vibration despite being made out of multiple pieces.

Where To Buy The Louisville Slugger 2020 Meta?