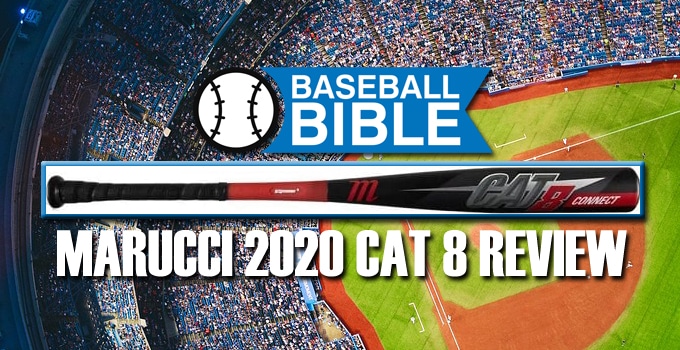 As a baseball enthusiast, I have extremely high standards when I review bats. So I was pleasantly surprised when I checked out the Marucci 2020 Cat 8 bats (both the white and black variations), and have both exceeded my expectations. I used the black version for my weekly game and asked my friend to use the white version, and we were both pleasantly surprised by the experience.

Editor’s Note: Marucci has not yet released an advertising video for the 2020 Cat 8, but you can watch the 2019 version above.

Despite being relatively new, the Marucci brand has risen through the ranks rapidly in a matter of years. Founded in 2002, it has grown in popularity very quickly as athletes and sports enthusiasts discover its products.

Since then, they have become the number one brand of bats in the Big Leagues alongside brands such as Easton and Rawlings. Unlike their competitors, their products are made with the help and advice of athletes and players, and it certainly shows. Before I geek out completely on their products, let me explain exactly what it is that I like about their bats.

Editor’s Note: The pictures used throughout this review are of the black variation of the bat. There is also a white version which you can get a closer look at here on Amazon.

I am slightly biased against alloy bats, preferring composites myself. Now, I’m not going to delve further into the alloy-or-composite debate, but I will briefly summarize what it’s about. Composite bats generally allow for a longer barrel while maintaining balance in the swing.

They also have extended sweet spots that perfectly increase your chances to hit pitches. Alloy bats, on the other hand, are heavier and shorter, but they do allow for faster swings. Every hit gives an extra push and increases your chances of that sweet home run.

The Marucci 2020 Cat 8 series uses something called AZ107 alloy, which is the strongest aluminum alloy that their bats feature. This lets their bats have thinner barrel walls that are more forgiving after off-center contact.

When I tested it out during our Wednesday baseball game, I noticed a significant lack of dead spots along the barrel. Unlike other alloy bats, these bats also have the extended sweet spot feature that I love about composite bats. Apparently, both of these characteristics are given by their ring-free multivariable wall design, which is something I’ve rarely seen on other bats, and never with this level of expertise in the application.

The Marucci 2020 Cat 8 bats are both one-piece alloy bats. As a personal preference, I use mostly two-piece bats, but the Cat8 is an exception. Because of its relatively lighter weight (averaging 5 pounds, depending on the length you get), you still get those faster swings despite its construction. Even if it was heavier than what I was used to, my swings weren’t as wild as I feared they would be. In fact, they were quite smooth and powerful—another thing I am pleasantly surprised with.

Yet another discourse in the community is about balance (yes, I realize how many debates there are in baseball now that I’m writing about them again). See, people are divided between end-loaded bats and balanced bats. End-loaded bats have the bulk of their weight on the ends, while a balanced bat has the weight equally distributed. The difference is not very noticeable initially, but you can’t possibly miss it when you start swinging.

I’ll try not to get too technical, but this is basically what happens: when you swing a bat, you are essentially moving where the bat’s weight is. If you remember your high school physics, you may recall it as the center of gravity. In baseball physics, we call it MOI (moment of inertia). A larger MOI makes for a more powerful hit (as seen in end-loaded bats), and a smaller MOI makes for a faster swing (as with balanced bats).

So what does all this mean? A balanced bat will swing faster. That’s it.

A Sum of Its Parts

Now, if you consider everything, from the alloy they used, to the main construction and design, to the weight balance, you’ll understand why I’m so ecstatic about this. They’re made with speed in mind, of course. Everything about it caters to power hitters who capitalize on speed and raw hitting power.

However, small aspects of their design make them good for those with weaker swings—nothing to be ashamed of.

Their extended sweet spot really hit the mark (pun intended), especially with its speed-based design. It’s the best of both worlds—or rather, considering the amount of discourse about bats, the best of all worlds. Even after hours of playing, my bats still looked like new.

However, if you’re like me, you’re probably thinking about the whiplash that all that power and speed will bring about. After all, no one wants the shock from a hit to transfer to themselves. Luckily, the Marucci 2020 Cat 8 stays one step ahead and adapts to this circumstance.

As mentioned above, Marucci partners with athletes and players to be their advisers when designing a new product. This results from their ergonomic handle and grip, ensuring control, comfort, and safety.

Their handle features a removable taper, an ergonomic knob shape, and a micro-perforated soft-touch grip. It is, put simply, an amazing handle. It doesn’t hurt, even if you grip it tightly, and unlike other bats, strong hits don’t sting your hands. My fast swings were cleaner, and I really felt like I had much more control over my swings.

Before trying them out, the Marucci Cat 8 bats were not my first choice. They were specifically not my preference, being one-piece alloy bats. Testing them out, it was hard to not be biased.

However, my expectations were greatly exceeded with these bats, and I have never been more pleased to be wrong about my assumptions.

Suffice it to say that these bats have seriously made me reconsider my bat preferences.